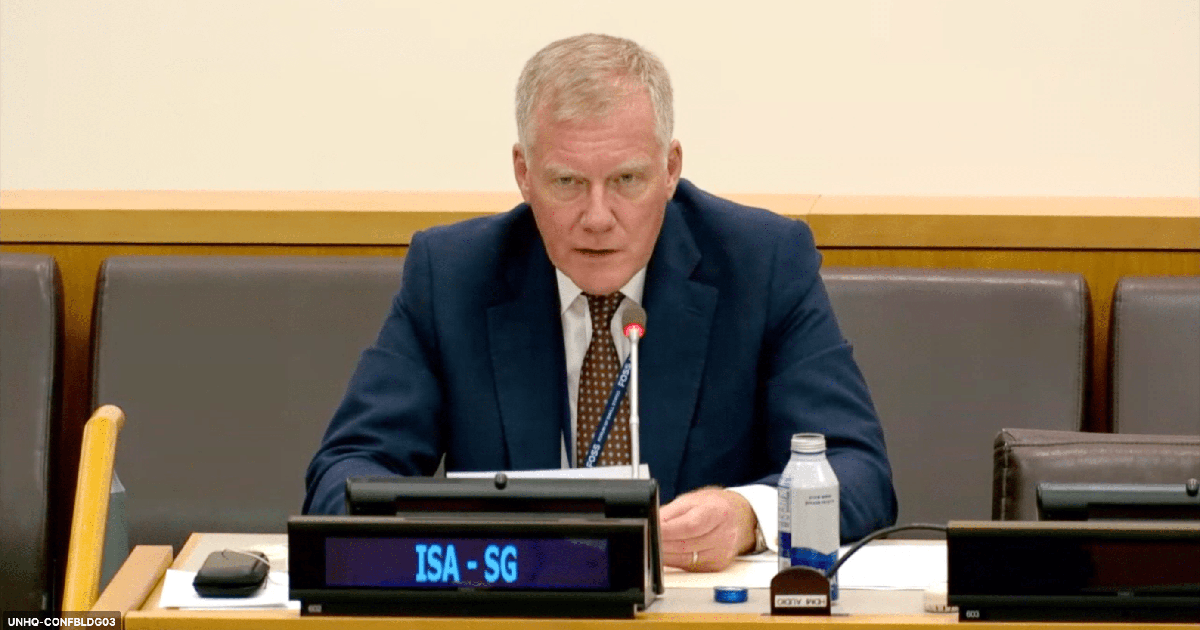 On 13 June 2022, the Secretary-General of the International Seabed Authority (ISA), H.E. Mr. Michael W. Lodge, presented the status of the work of ISA to the 32nd Meeting of States Parties to the United Nations Convention on the Law of the Sea (UNCLOS).

Mr. Lodge congratulated Ambassador Frazier of Malta for her election as president of the Meeting and extended his appreciation to States parties for their continuous support of the work of ISA. He especially thanked them for their support of the resumption of in-person meetings of the Council and Assembly in December 2021, which enabled bringing the 26th session of ISA to a conclusion and the endorsement by consensus by the Council of a roadmap for accelerated work on the draft exploitation regulations with a view to adopt the regulations by July 2023.

“The development of these rules and standards is the present urgent and critical mission of the Authority in furtherance of its exclusive mandate to manage deep-sea mineral resources for the benefit of humankind,” he said.

Mr. Lodge recalled that the work on the draft exploitation regulations started in 2015 following a request by Fiji and that the Legal and Technical Commission of ISA held a series of public consultations on various elements of the regulations and formulated a draft text, which it submitted to the Council in 2019. The Council established four working groups to organize its work. While the working groups were unable to make substantive progress in 2020 and 2021 due to constraints created by the pandemic of COVID-19, Mr. Lodge reported that good progress was made by the groups at the first part of the 27th session in March 2022, in accordance with the road map agreed in December 2021, especially in the working group on environmental matters.

“I hope that this progress can be maintained during the forthcoming meetings of the Council scheduled for July this year. Again, this is an extended two-week meeting, with the intention of advancing work on the draft regulations,” he said.

“The draft regulations are very far advanced and have already had the benefit of detailed expert scrutiny by the Legal and Technical Commission, as well as the widest possible public consultation. At this stage, we are way beyond general principles, and I urge delegations to bring appropriate technical experts as we are dealing with detailed technical provisions,” Mr. Lodge added.

The Secretary-General then reported on other responsibilities of ISA in addition to its regulatory mandate, including marine scientific research, transfer of technology and capacity-building for developing States, the protection of the marine environment and the distributions to States Parties of payments or in-kind contributions.

In particular, Mr. Lodge announced the launch on the occasion of World Oceans Day on 8 June 2022 of AREA2030, a new initiative implemented in collaboration with the International Hydrographic Organization (IHO) which aims to encourage exploration contractors to voluntarily submit high resolution bathymetric data to IHO based on a data submission agreement signed with IHO. Mr. Lodge also reported on progress made on standardizing and innovating methodologies for deep-sea biodiversity assessment and a new important collaboration with the European Commission, including a significant level of funding support. Concerning ISA’s flagship Women in Deep-Sea Research project implemented with the Office of the High Representative for Least Developed Countries, Landlocked Developing States and Small Islands Developing States (UN-OHRLLS), Mr. Lodge announced the imminent release of an important report, including a gender-mapping analysis and identification of critical barriers to the participation of women from LDCs, LLDCs and SIDS in deep-sea related research disciplines and activities and access to leadership positions. As an extension of this initiative, and in his capacity as an International Gender Champion, Mr. Lodge also announced the launch on 7 June of an Impact Group on Research and Oceans for Women (IGROW) in collaboration with the Honourable Minister of Foreign Affairs of Tonga, Ms. Fekita ‘Utoikamanu and the UN Legal Counsel, Mr. Miguel de Serpa Soares. Finally, Mr. Lodge mentioned that a strategy for a programmatic approach to capacity development requested by the Assembly in 2021will be presented in July following stakeholder consultation in April 2022.

Several of these initiatives will be spotlighted during five side events organized by ISA at the forthcoming Ocean Conference in Lisbon.

In concluding, Mr. Lodge reiterated the importance of the role played by UNCLOS and its institutions to ensure international cooperation, peace, security and a legal order for the seas and oceans. “It is the right of all States, coastal or landlocked, to carry out activities in the Area. The only conditionality around that is that such activities must be conducted in accordance with the rules, regulations, and procedures of the Authority,” he said. “That is why it is in the interests of the whole of the international community that their integrity is protected and not undermined, including by other parts of the UN system. So, as we mark this fortieth anniversary, I trust that together we will be able to unite once again around the vision of peace, security and cooperation that is reflected in the Convention.”