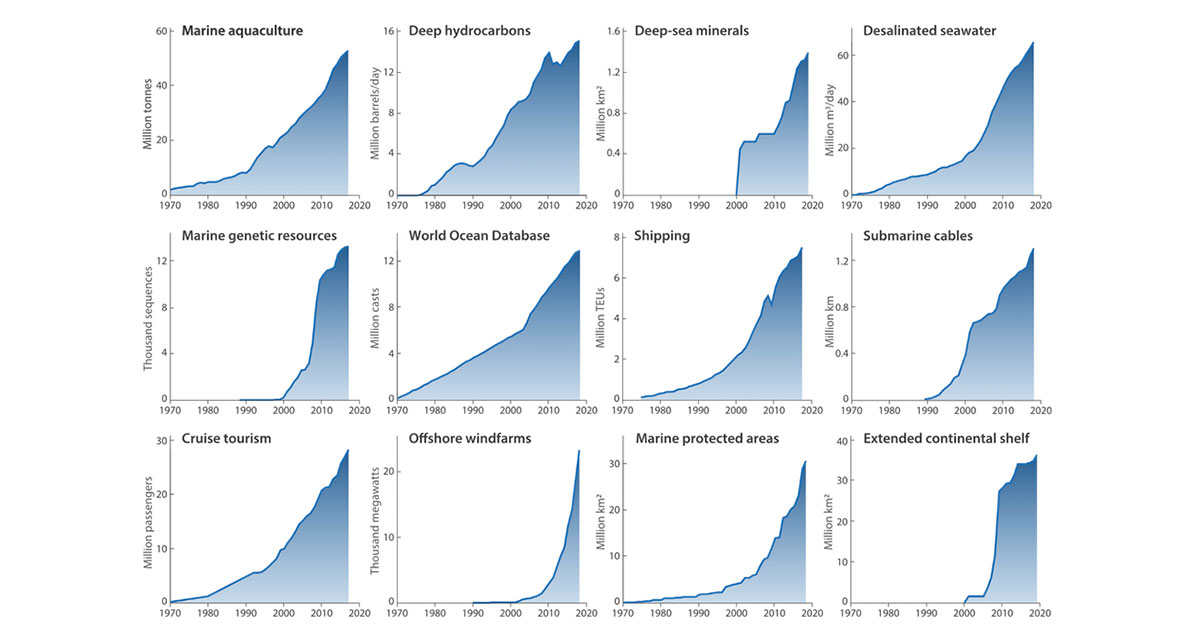 Global trends in show growth in several key indicators for ocean exploitation. Credit: Jouffray et al. (2020). The Blue Acceleration: The Trajectory of Human Expansion into the Ocean (https://doi.org/10.1016/j.oneear.2019.12.016) via The Conversation

The Conversation reports that we are living through a “Blue Acceleration” that will have significant consequences for life on Earth.

What does that mean? In short, the growth of industries targeting offshore resources is growing at an accelerated rate reminiscent of post-WWII industrialization of land-based resources. Or, as the phrase’s inventors put it, “As demand for resources continues to grow and land-based sources decline, expectations for the ocean as an engine of human development are increasing. Claiming marine resources and space is not new to humanity, but the extent, intensity, and diversity of today's aspirations are unprecedented. We describe this as the blue acceleration—a race among diverse and often competing interests for ocean food, material, and space. Exploring what this new reality means for the global ocean and how to steer it in a sustainable and equitable way represents an urgent challenge.”

According to author Robert Blasiak, “As land-based resources have declined, hopes and expectations have increasingly turned to the ocean as a new engine of human development. Take deep sea mining. The international seabed and its mineral riches have excited commercial interest in recent years due to soaring commodity prices. According to the International Monetary Fund, the price of gold is up 454% since 2000, silver is up 317% and lead 493%. Around 1.4 million square kilometres of the seabed has been leased since 2001 by the International Seabed Authority for exploratory mining activities.”

He adds, “Exploitation of the ocean has tended to precede exploration. One iconic example is the scaly-foot snail. This deep sea mollusc was discovered in 1999 and was on the IUCN Red List of endangered species by 2019. Why? As far as scientists can tell, the species is only found in three hydrothermal vent systems more than 2,400 metres below the Indian Ocean, covering less than 0.02 square kilometres. Today, two of the three vent systems fall within exploratory mining leases.”

To read the rest of this article, click here.