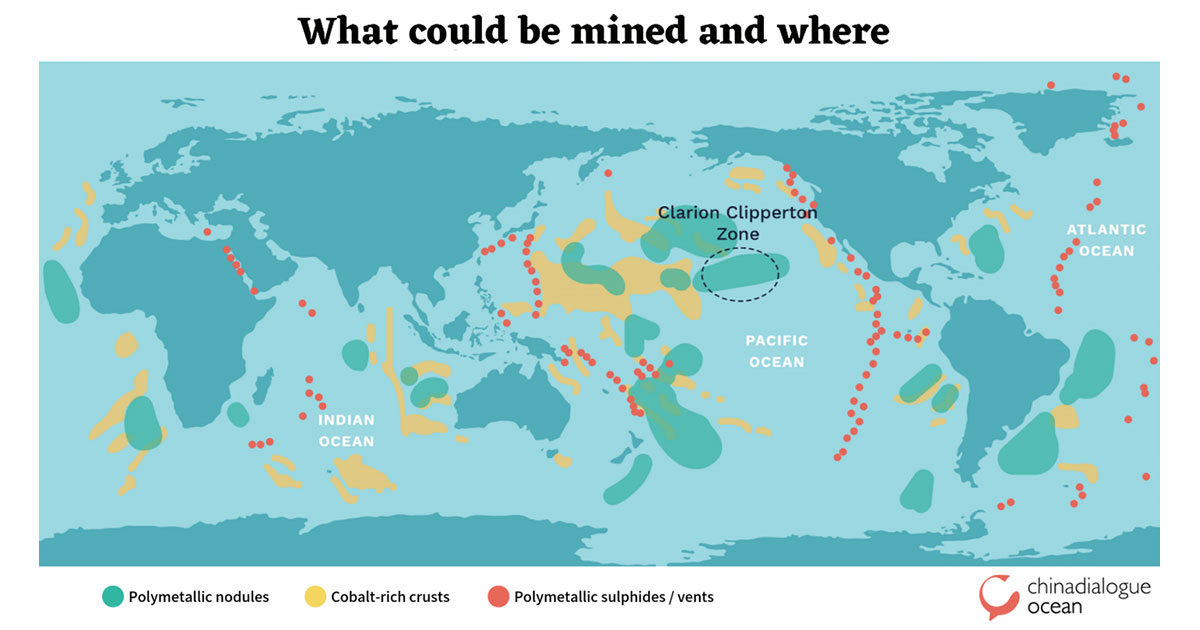 According to a recent article in Pandaily, China must turn to ocean mining to meet the demands of electric-powered transportation and reduce dependence on fossil-fuels.

Author AG Cortese wrote, “China will turn its focus to another crucial resource in tomorrow’s energy economy: batteries. Cobalt, lithium, copper and nickel are just some of the precious metals inside batteries, and all will skyrocket in demand as countries continue the long journey away from fossil fuels and towards electrification. By some estimates, on a planet with 1 billion cars, the transition to electric vehicles would require several times more metal than all existing land-based supplies.”

Cortese questions whether a dependence on scare minerals is compatible with sustainability, but adds that “mining corporations are looking to new, bluer pastures for crucial ores.”

Cortese notes the role of the International Seabed Authority (ISA), based in Kingston, Jamaica and adds: “The potential risks from deep sea mining are not very well understood, but one mining technique releases large amounts of sediment in the water, interfering with and damaging ecosystems. Due to these potentially negative consequences of deep sea mining, the ISA has only begun to grant exploratory permits to governments, research institutions and commercial entities. So far, the ISA has issued a total 30 permits, five of which were to Chinese entities, more than any other nation. The most recent contract, awarded in July 2019, grants China access to a 148,250 square kilometer swathe of the Western Pacific Ocean.”

He quotes Michael Lodge, ISA general-secretary as saying that he expects the ISA will adopt a draft of seabed mining rules in July 2020.

Concerning environmental risks, Cortese says that, “GreenPeace has called for an immediate moratorium on deep sea mining to investigate the potential impact on deep sea ecosystems, but the ISA has rejected such a proposal. However, according to University of Hawaii oceanographer Jeff Drazen, undersea mining could have untold consequences for scientific discovery. He points to the many undiscovered microbes in the deep sea, and their potential to facilitate medical breakthroughs.”

However, says Cortese, “Despite these credible concerns, the potential to harvest vast quantities of underwater minerals is simply too enticing to the private sector. China’s status as an energy importer positions the nation as a key beneficiary of deep sea mining. China’s interest in deep sea mining is underscored by its support for the ISA as its biggest benefactor, while also jointly establishing an ocean mining research center in the Chinese coastal city of Qingdao. The research center opening coincided with the signing of a memorandum of understanding between China’s State Oceanic Administration and the ISA.”

Because ae 2020 deadline for the ocean mining code “primarily benefits companies with the most advanced technological methods that allow them to conform to guidelines. China’s capabilities for undersea mining still lag behind some of the industry leaders, which would explain the lack of urgency from the Chinese ISA delegation to go forward with the mining code.”

Another potential reason Cortese cites for China’s patience with the ISA is “due to China’s dominance in terrestrial mining, especially for battery components like cobalt. Chinese companies own eight of the 14 cobalt producers in the Democratic Republic of Congo, home to 68% of the world’s cobalt supply.”

Looking forward, Cortese quotes a director from Beijing Pioneer Hi-Tech Development Corporation, a Chinese company awarded an ISA contract to explore polymetallic nodules, who said that mining of the mineral-rich ridge in the Western Pacific Ocean is projected to begin between 2030 and 2035.