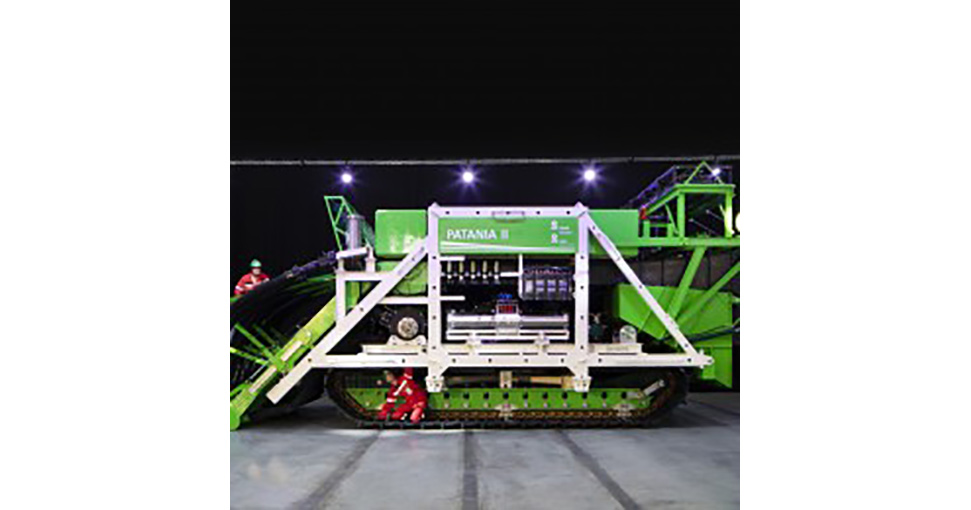 Global Sea Mineral Resources (GSR), DEME’s subsidiary specialised in deep sea harvesting, has unveiled the nodule collector ‘Patania II’. The pre-protoype is the successor of the tracked soil testing device ‘Patania I’, which was successfully tested during a 2017 expedition in the Central Pacific Ocean. Check out our Deep-Sea Mineral Exploration movie.

Against a background of a growing population and an increasing scarcity of resources, GSR is developing breakthrough, deep sea mining technologies. The ‘Patania II’ integrates the track design of the first ‘Patania’ prototype with a suction head to collect polymetallic nodules from the seabed.

In 2019 the nodule collector will embark on its first expedition in the GSR and BGR (German) exploration areas, involving a test area of 0.1 km2. Back in 2013, the International Seabed Authority granted GSR a 15-year concession to explore 76,728 km2 of seabed in the eastern part of the Clarion Clipperton Zone in the Central Pacific Ocean.

During the expedition the vehicle will temporarily store nodules harvested from the seabed in a hopper for data collection, and redeposit them in the test area. GSR will use the test data to validate the performance of the technology and to assess the environmental impact of the test operations.

Polymetallic nodules can be found on the seabed in most oceans around the world and contain large quantities of critical raw materials such as nickel, copper, cobalt and manganese. These metals are vital for the urbanisation and electrification of our planet as they are key ingredients for stainless steel, batteries, wind turbines and photovoltaic systems.

GSR has teamed up with Ghent University and together they will monitor the in-situ environmental impact of the ‘Patania II’, again gathering crucial design data, allowing GSR to further redesign its technology to increase efficiency and minimise its impact. Furthermore, an international consortium of scientists from the EU Joint Programming Initiative for Healthy and Productive Seas and Oceans will provide independent and transparent reporting of additional environmental measurements. All information regarding the environment will be publicly available.

‘Patania II’ has been developed by GSR in cooperation with the Belgian engineering company De Meyer, located in Temse, Belgium.