The Race for The Deep 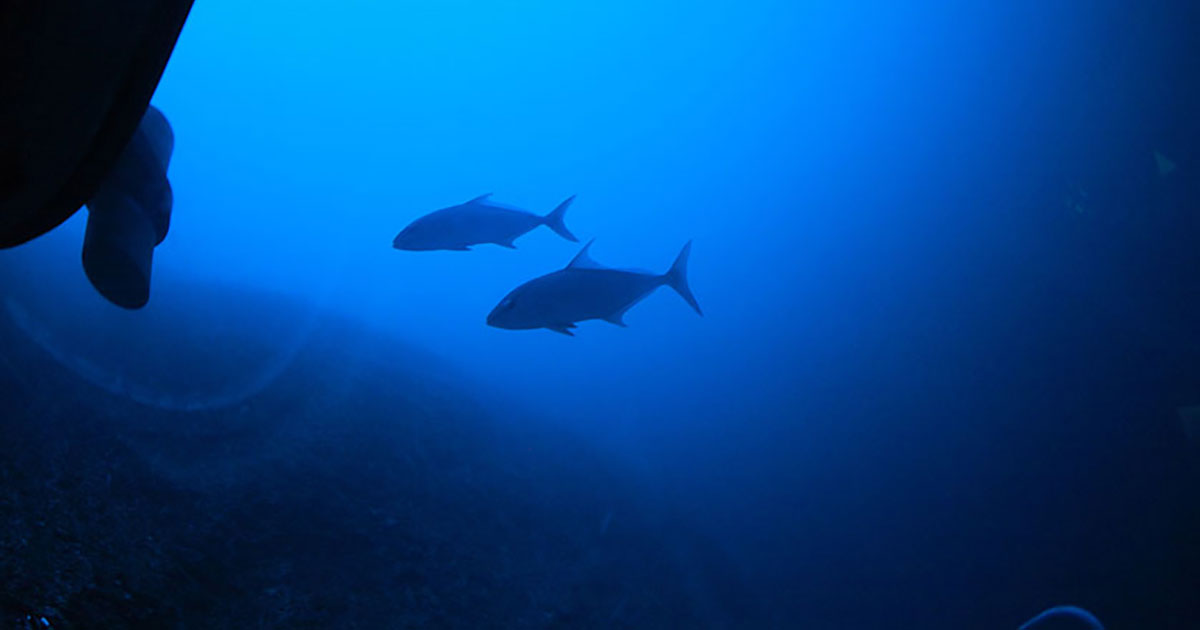 Under glistening blue waves lies a dark, inhospitable world unlike anywhere else on our planet. Although the harsh conditions make it impossible for humans to survive there, the deep ocean is far from devoid of life. The largest ecosystem on Earth is home to many bizarre species and unique habitats. It is also rife with valuable metals, rare elements, and hydrocarbons yet to be harvested by humankind.

Past efforts at exploiting deep-sea resources have caused significant damage to biodiversity hotspots such as seamounts and cold-water coral reefs. Now, the new “gold rush” is enticing maritime industries into deeper waters on the hunt for Earth’s hidden treasures. Professor Alex Rogers, science director of Nekton and one of the world's pre-eminent oceanographers, explains that in the race for the deep, global science communities must unite to advance knowledge, legislation, and technology to ensure a sustainable Blue Economy.

In Europe alone, the Blue Economy is worth around €500 billion every year—equivalent to 4% to 5% of the total economy. It is a significant area of economic activity globally, and one that is not restricted to coastal states.

Rogers explains: "Since the 2008 crash, many countries now look towards the Blue Economies as a means of increasing employment and revenue. This is not just the West, it also includes developing economies and small island states throughout the world. A new frontier for Blue Growth is the deep ocean. The main industry players include Fishing—a legacy industry in the ocean—and Oil and Gas—around 40% of the remaining large hydrocarbon reserves are found in deep water. Newer activities such as renewables, carbon capture and storage, marine mining, and even aquaculture are not far behind."

History has already demonstrated how these activities have the potential for direct impact on deep-sea ecosystems. But the deep sea can also be affected indirectly; even activities in shallow water can have knock-on effects in the deep ocean. 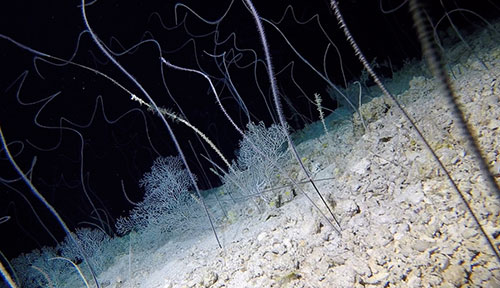 The fact that the ocean is divided into different legal regimes makes management complicated. While operations within coastal state zones are bound to the states maritime regulations, there is no legal framework for the protection of marine biodiversity in the high seas.

According to Rogers, "There are currently negotiations going on at the United Nations around the topic of biodiversity beyond national jurisdiction (BBMJ). They are hoping to put together a new implementing agreement under the UN Convention of Law on the Sea, specifically to protect environments outside of state control. They also want to set up rules for environmental impact assessments and look at the topic of exploitation of marine genetic resources. Biotechnology is another Blue Economy area which is potentially growing."

At present, exploration of mineral resources is taking place in areas beyond national jurisdiction. The licensing process for mining activities is currently under the control of the UN organisation called the International Seabed Authority. For the fishing industry, Regional Fisheries Management Organisations manage activities in open water, but the level of enforcement is determined by the flag states of the vessels.

Rogers explains: "At Nekton, we could see that fishing was moving into deeper and deeper water. They were using very destructive methods such as bottom trawling on very fragile and vulnerable deep-sea ecosystems, such as deepwater coral reefs and sponge garden habitats. The result of pulling a trawl through those type of systems is complete destruction. After scientists gathered evidence of this damage, eventually enough pressure was brought to bear on the UN General Assembly to act. The UN, in turn, requested the Food and Agricultural Organisation (FAO) develop new guidelines for management of those deep-water fisheries in the areas beyond national jurisdiction."

“I have even heard a lobbyist from the fishing industry state that sediments in the deep sea are devoid of life. Nothing could be further from the truth.”

Nekton’s mission is to use exploration and science to focus the world's attention on the health of the deep ocean. Their discoveries generate actionable data to catalyse policy to accelerate sustainable governance.

By forming an alliance of some of the world’s leading marine science, funding, technology, conservation, education, and media organisations, Nekton wants to maximise the global impact of its research to enable the protection of the deep ocean before it’s too late. This starts by addressing our lack of understanding of the distribution of species in the deep—their diversity, abundance, and biomass—and how those patterns change over large spatial areas. In 2015, Rogers published a report with the European Marine Board involving scientists and industry, concluding that this lack of knowledge of the distribution of life was the major barrier to bring about more effective management of human activities in the deep ocean.

Rogers explains: "Many people have a perception that the deep sea is sparsely populated—so why worry about environmental impact? I have even heard lobbyists from the fishing industry state that sediments in the deep sea are devoid of life. Nothing could be further from the truth. There is actually an increase in species richness and the diversity as you get down to between 1,000 and 3,000 m depth.”

Nekton is developing a global programme to look at diversity in the bathyal zone—an area between 200 and 3,000 m deep—where the peak in diversity occurs. It also happens to be the location of many vulnerable marine ecosystems such as cold-water coral reefs.

Members of the scientific community estimate that there are 14 bioregions in the bathyal depths globally, all with different physical attributes such as temperature, oxygen concentration, and food availability. “Nekton is targeting those bioregions to try and really make a leap forward in terms of our understanding of how life is distributed in the deep sea. This research will give us a better baseline of the state of the deep ocean and how much humans have already impacted what is the largest ecosystem on Earth," explains Rogers.

“It is no longer simply a question of developing new machines to go into the deep sea.”

Deep ocean exploration requires technological innovation comparable with the exploration of space. And, in many respects, it is just as challenging.

Spatially, the size of the deepwater ecosystem is a problem for research. It is also generally inaccessible to the point that more people have gone into space than to the deepest part of our oceans.

Remotely Operated Vehicles (ROVs), Autonomous Underwater Vehicles (AUVs), and Human Operated Vehicles (HOVs) developed over the last 50 years are now the cutting-edge of deep-sea exploration and scientific research. Deep-sea ROVs can operate down to 6,500 m depth. Regardless, there is still a need to develop innovative technological approaches to deep-sea research.

“It is no longer simply a question of developing new machines to go into the deep sea. Because of the size of this ecosystem, what we need are more automated approaches to gathering and analysing data. We must also think about new ways to deal with potentially vast quantities of information and visual data that underwater technologies can bring back. For example, AUVs can produce huge datasets, which leaves us with a problem of dealing with all that information. It was the same in the revolution of DNA sequencing that has caused the adoption of new methods to analyse vast quantities of genetic data that are coming from the super high throughput sequencing technologies," said Rogers.

“We really need an effort comparable both in finance and time to huge-scale space projects.”

In Nekton, they are particularly keen on the use of submersibles, which not only helps to place scientists within the deep ocean environment but also helps communicate to the broader public about this enormous, seemingly remote but important ecosystem. While increasing awareness for the fragility of the deep can help drive policy changes, there is no escaping the need to further expand our knowledge and understanding of Earth’s “inner space.”

"We really need an effort comparable both in finance and time to huge-scale space projects—funds in [the] order of billions and projects lasting 10, 20, or 30 years. That has been severely lacking from ocean research over the last 20 or 30 years. We need a massive up scaling of scientific effort to really address the current knowledge gaps and develop automatic methods that allow us to understand the information we already have about how the deep ocean works and where life is distributed in the deep sea.”

The Race for the Deep

Many within the science community and industry are expressing concerns in the growing shadow of the Blue Economy that threatens scientific endeavours to better understand the deep ocean. History has already shown how the race between science and industry is easily lost by those lacking provisions and support from global leaders. Unfortunately, science is usually left behind and can only witness the damage caused in the wake of unregulated activities.

Rogers recalls, “We have seen this first hand when we were in the southwest Indian Ocean surveying seamounts using a deep ROV. We found one seamount covered in lost lobster pots, which was really staggering. We were literally out in the middle of nowhere—around 5 or 6 days steaming at full speed from the nearest land—and yet it has clearly been subjected to intense fishery for rock lobsters. It wasn't illegal, but it was certainly unreported and unregulated. This is the type of behaviour we want to avoid in the future at all costs.”

“…with the rise of nationalism over the last 5 to 10 years, this whole process is becoming more difficult.”

“These systems can become heavily damaged before anyone has had the opportunity to even understand what biodiversity may be threatened or understand the potential future consequences for us as humans. Accompanying that we really need to see a much stronger scientific effort towards gaining firm knowledge bases to intelligently manage our activities and keep them functional for future generations. Unfortunately, that requires international cooperation and, with the rise of nationalism over the last 5 to 10 years, this whole process is becoming more difficult.”

The deep sea is a spectacular and hidden treasure regarding the ecology of the planet. Even “aquanauts” who venture into reasonably well-studied areas such as Bermuda are discovering new ecosystems and species as shallow as 300 m deep. In the less-explored areas, sometimes everything scientists find is yet to be described by science. We are only just beginning to understand how these ecosystems function and the services they provide for humankind.

In the race for the deep, the science community and industry must work together if there is any hope in creating a sustainable Blue Economy that can endure both time and human activity for future generations.

Alex Rogers, science director at Nekton, professor of conservation biology at the University of Oxford, and scientific director of the International Programme on the State of the Ocean