Into the Abyss with Deep-Sea Biologist Diva Amon 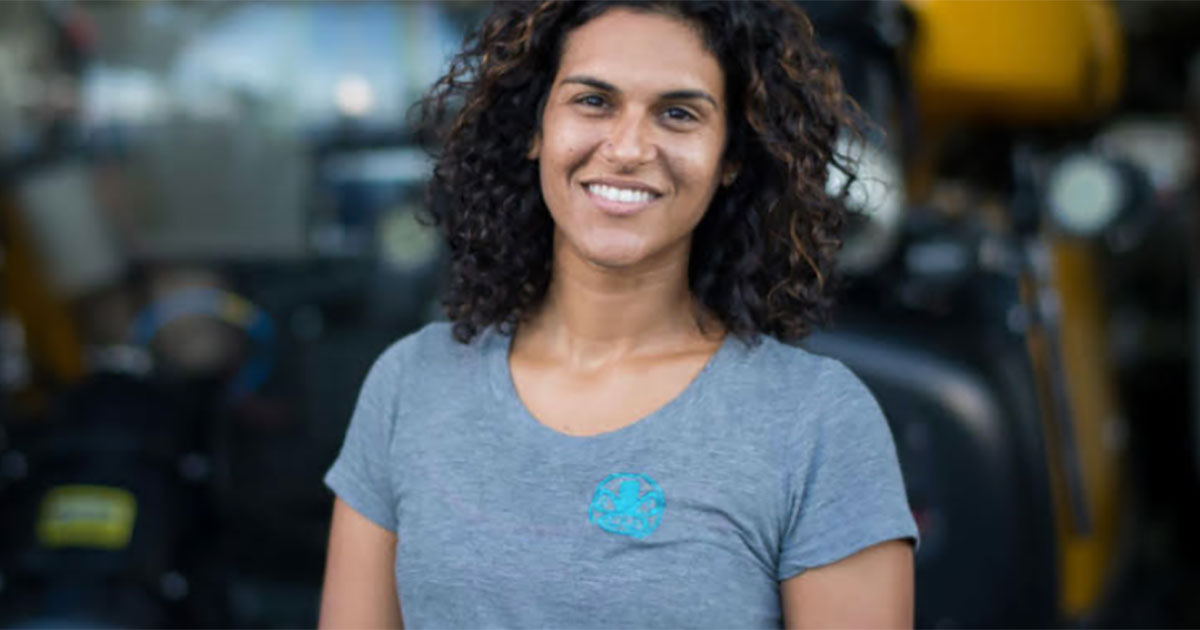 Dr. Amon is speaking at the upcoming Jackson Wild Summit in Wyoming later this month.

Deep sea biologist Diva Amon is a Trinidadian who was raised by the shore of the Caribbean Sea, but has become well known not for the sea’s edge, but rather for what lies deep beneath it. She co-founded SpeSeas, a non-profit NGO focused on increasing marine science, education and advocacy in Trinidad and Tobago, and is currently a Research Fellow at the National History Museum, London.

She will be part of the deep sea session of the upcoming Jackson Wild Summit in Jackson, WY, September 21-27, which will have a focus on ‘Living Oceans’ (more information and registration for the event is here).

Prior to heading for Wyoming, Dr. Amon took a break to answer a few questions.

Mongabay: Hydrothermal vents and the communities that thrive on them have been a regular source of discovery in recent years, can you describe your new study‘s assessment of their biodiversity?

Dr. Diva Amon: Cruise reports, initial observations and assessments from research cruises are an overlooked source of biological information. This recently published study has used all available cruise reports from cruises that went to hydrothermal vents to show that global research effort has been skewed geographically. We know much more about vents in the Northern Hemisphere, in places like the Mid-Atlantic Ridge, while regions such as the Southern and Indian Oceans are practically unexplored. Under business as usual scenarios, this would propel us scientists to increase our work in understudied areas, but with mining of hydrothermal vents looming, it is an alarm bell.

We must make it a priority to gather more data so that accurate environmental assessments of the impact of mining can be made, especially vent sites [that] are unique, and many more vent sites are threatened by deep-sea mining in the Southern Hemisphere. As it currently stands, as Andrew, the lead author says, “we’re drawing on data from very different ecosystems. It’s like trying to understand the impacts of logging in a tropical rainforest, but only using forestry data from the Pacific Northwest.” We desperately need to correct this if mining at deep-sea hydrothermal vents is to move forward responsibly.

What gaps are there in our knowledge of these communities?

Our assessment also reminded us that despite hydrothermal vents being some of the most well-explored deep-sea habitats, when compared with terrestrial ones, we know next to nothing about them. Globally, many sites are only inferred from chemical signals and have never been visited [and] others we don’t even know exist. For those where scientists have been working, a big gap is the natural variability of these habitats and the communities there.

Hydrothermal vents were only discovered in 1977, with new sites being discovered nearly every year. Many of these sites have only been visited once, or a handful of times, so that temporal aspect is missing. We also are only now grasping how communities are connected with – and travel between – vent sites, not just on local scales, but also regionally and globally. And what about the big roles that vents are playing for the rest of the deep sea, our oceans and our planet? 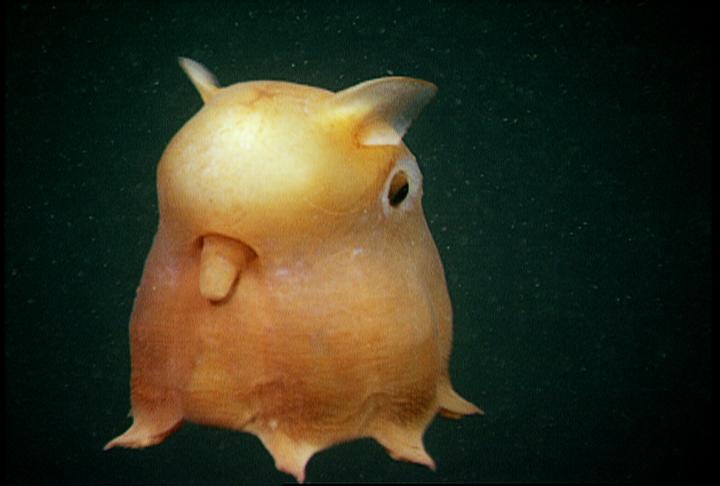 One of Dr. Amon’s favorite animals to see on a dive, the dumbo octopus. Image via Smithsonian Institution.

Collaboration is a key way to gather those missing pieces! Firstly, between scientists from around the world, especially from countries that have not previously had the financial or technological capability to conduct studies, even within their own waters themselves. Secondly, with industry. Industry may have access to resources and data that science may not, and vice versa. Thirdly, with the regulators, so that regulations can be adopted, as well as enforced, effectively. We must continue to explore the deep ocean in order to understand it better.

What inspired you to study these nearly impossible to reach depths?

I’m Trinidadian and grew up in the Caribbean, which meant spending a lot of time by the sea. I knew I loved the ocean but I never gave the deep ocean any thought. It wasn’t until my first deep-sea biology course, I was struck hearing that less than 1% of our deep ocean had ever been explored. That is a staggering figure! Everyone has some inner desire to explore, to see things no one has ever seen, to answer questions that have never been answered, to have experiences that few have ever had. Deep-sea science was my gateway to that excitement of never knowing what you’re going to see in an unexplored and ever-changing ocean.

You are a leader of the Deep-Ocean Stewardship Initiative (DOSI)’s minerals working group: what is that group doing to safeguard the deep ocean and inform sustainable use of things like deep-sea minerals?

DOSI is an expert group that seeks to integrate science, technology, policy, law and economics to advise on ecosystem-based management of resources in the deep ocean and strategies to maintain the integrity of deep-ocean ecosystems. We work across a range of issues, from deep-sea fishing to oil and gas extraction, deep-sea mining, and even the Biodiversity Beyond National Jurisdiction (BBNJ) negotiations at the UN. Many of us assist in collecting mandatory and crucial deep-sea data and then we take that science, as well as from other colleagues, and translate it so that it can be used to guide policy through conversations with stakeholders. 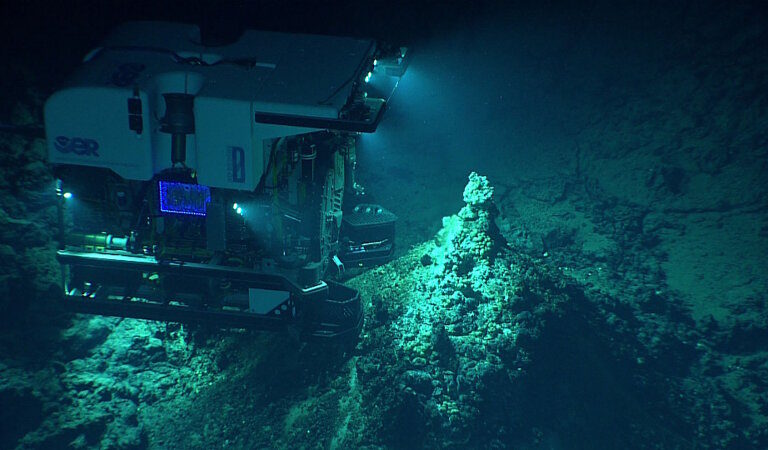 A submersible inspects a newly discovered hydrothermal vent. Image courtesy of the NOAA Office of Ocean Exploration and Research, 2016 Deepwater Exploration of the Marianas.

What are the chief challenges to meaningful deep sea stewardship?

Lack of data and understanding! Less than 1% of the deep sea has ever been imaged or seen, so it’s currently very difficult to make stewardship decisions. Not only do the deep ocean, its inhabitants, and their functions amaze and inspire us, but they also have the potential to provide solutions to some of the world’s greatest challenges, but we just don’t know yet. We can’t effectively manage what we don’t understand or protect what we don’t know.

What creature has given you the greatest joy of seeing in the deep so far during one of your expeditions?

Dumbo octopus get me every time! They are just so cute! Also headless chicken monsters (Enypniastes eximia), which are a type of sea cucumber capable of swimming. Their movement is just hypnotic, like a lava lamp. We see these often but there is great video from a cruise to the Gulf of Mexico in 2017.

What do you yearn to see?

Has to be giant tubeworms from the Pacific vents (Riftia pachyptila). They are one of the most iconic deep-sea species, and would be like seeing a big cat during a safari. It’s on my bucket list! 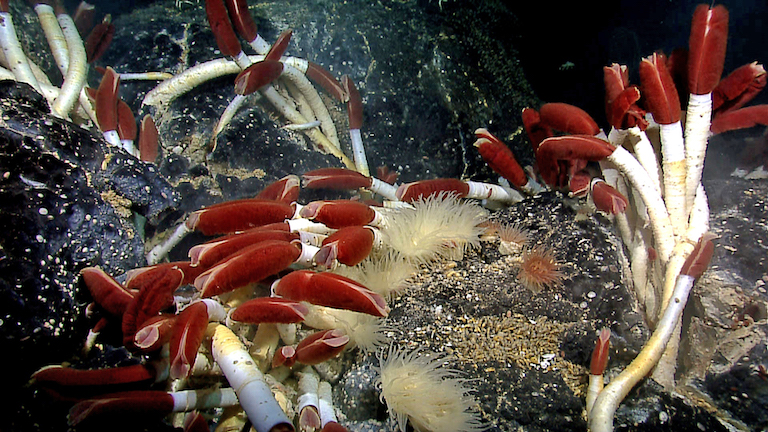 Photo of one of the largest concentrations of Riftia pachyptila ever observed, with anemones and mussels colonizing in close proximity. Image courtesy of the 2011 NOAA Galapagos Rift Expedition.