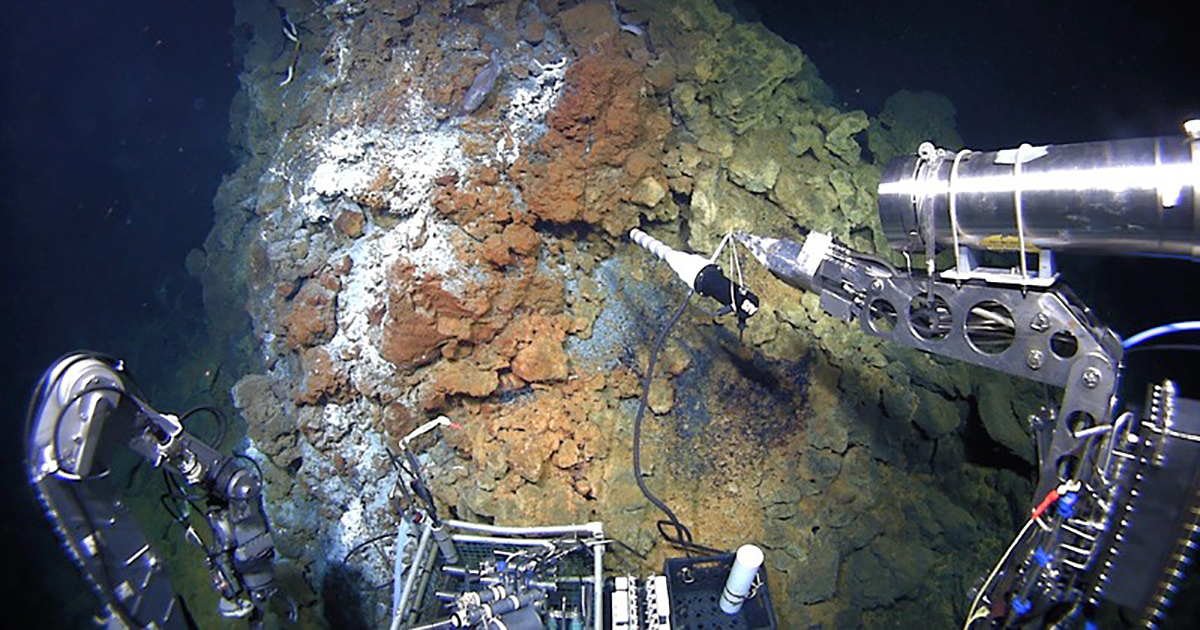 Experts at the University of Delaware have recognized the promise and potential challenges in the emerging industry of mining minerals under the ocean. Photo by Adam Thomas

As anyone who has replaced a cell phone or computer recently knows, the world is continually adopting more advanced technologies, all of which are built of and powered by a diverse suite of minerals. At the same time, the price of mining is increasing as operations have to dig deeper or look for deposits in more remote areas.

The pressure from both additional need and higher prices means new sources for these minerals will have to be found, and there is a growing interest in exploring one possible untapped source: under the ocean and other waters.

Experts at the University of Delaware have recognized the promise and potential challenges in this emerging industry early on and are working to become leaders in a field joining academic, governmental and commercial partners to establish the best ways to understand and regulate such mining.

As an early step, the Minerals, Materials and Society (MMS) program hosted a public symposium on the environmental and social impacts and benefits of mining and other extractive industries under water on Wednesday, Aug. 28 at UD’s Virden Retreat Center on the Hugh R. Sharp Campus in Lewes. 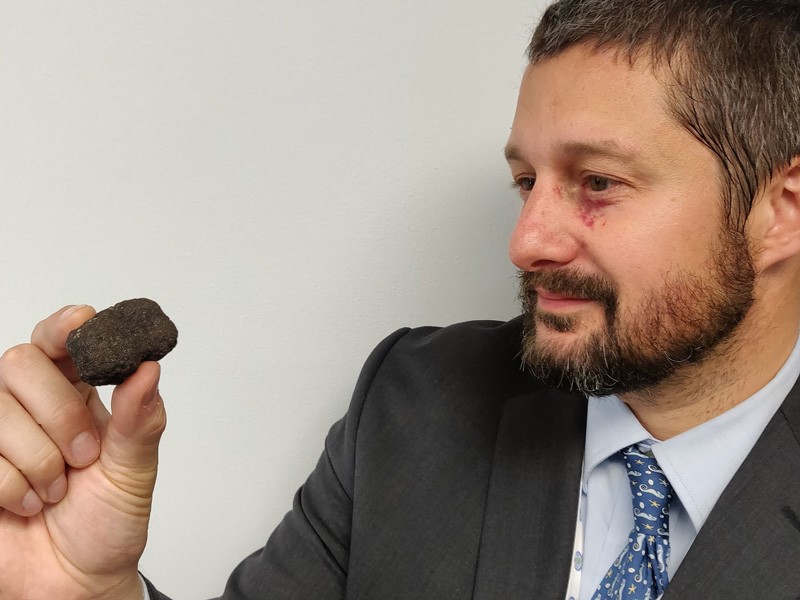 Andrew Thaler, affiliated faculty member in the School of Marine Science and Policy, holds a “potato sized” polymetallic nodule that can be found under water. Photo by Adam Thomas

The “Minerals Under Water: The Science and Politics of Extractive Industries in the Ocean and Beyond” symposium featured an international group of presenters on topics ranging from establishing responsible environmental policy and governing this new industry to the technologies used in underwater mineral extraction and how mineral contractors can work with the academic community. It was organized by Saleem Ali, Blue and Gold Distinguished Professor of Energy and the Environment; Andrew Thaler, affiliated faculty member in the School of Marine Science and Policy in UD’s College of Earth, Ocean and Environment; and Patricia Syvrud, MMS program development manager. The MMS program is one of the first of its kind in the United States and offers a for-credit graduate certificate aimed at industry, government and civil society professionals working across mineral and extractive supply chains.

“Mineral extraction under water is the next frontier in our quest for sustaining technological development,” said Ali. “UD can be ahead of the curve in developing capacity for research and training in deciding whether or not to engage in extraction in fragile aquatic ecosystems and harnessing these resources most responsibly where appropriate.”

The symposium featured presenters from India, Gabon, Germany, Japan, South Africa, the United Kingdom and the United States. Some spoke on issues specific to particular kinds of mining, and others addressed the impacts an underwater mining industry might have on specific places around the world. The plan is for the presenters to write chapters on their topics that will be compiled into a book centered on this new and emerging industry. Such a publication would allow the MMS program and UD to continue to advance the conversation on underwater mining in the larger academic community.

One of the topics covered with regards to mining minerals underwater was how to go about setting up rules and regulations to ensure environmental quality within the industry.

Keynote speaker Conn Nugent, project director of the Seabed Mining Project at the Pew Charitable Trust, spoke about the importance of implementing Regional Environmental Management Plans for deep-sea mineral extraction, saying that there is an unprecedented environmental opportunity to write the rulebook before the process of deep-sea mineral extraction begins on a large scale. 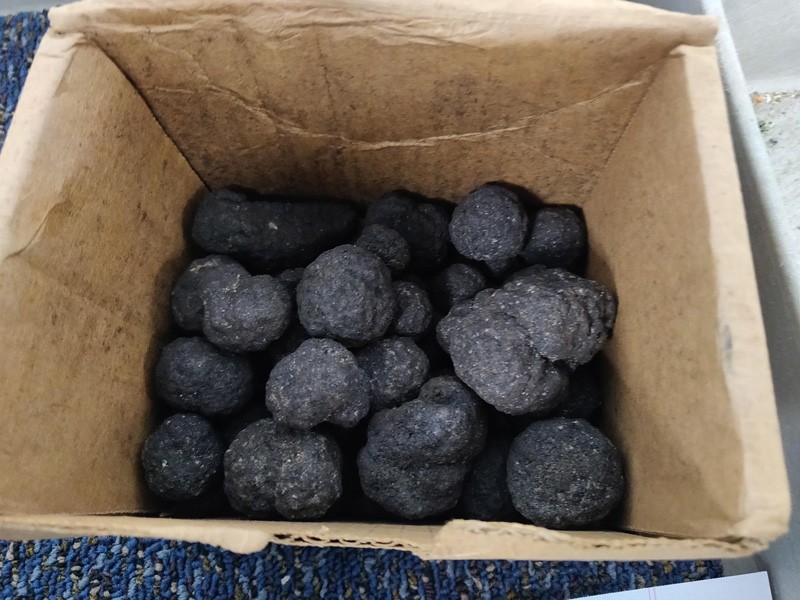 A box full of “potato sized” polymetallic nodules that can be found under water. Photo by Adam Thomas

Samantha Smith, the second keynote speaker and the head of sustainability and external relations at Global Sea Mineral Resources, spoke about how seabed mineral contractors can interact positively with the academic community. She also agreed with Nugent’s rulebook assessment, saying that never before in history has so much thought gone into regulating an industry before it exists.

In addition to being one of the symposium’s organizers, Thaler also presented at the symposium on “Emerging Technologies for Exploration and Independent Monitoring of Seafloor Extraction in Areas Beyond National Jurisdiction.”

Also known as international waters, the area of ocean that lies beyond national jurisdictions covers about 64% of the ocean and is the region in which most major deep-sea mining ventures intend to operate.

There are three similar but distinct opportunities that countries and private industries are looking to exploit through deep-sea mining operations: seafloor massive sulfides, or deep-sea hydrothermal vents, which are small discrete ore bodies rich in metals like copper, gold and silver; polymetallic nodule fields where metals accumulate into potato-sized accretions of cobalt, manganese and nickel; and cobalt-rich crusts that form on sea mounts.

Nations have already begun the initial steps towards developing some of the deep-sea mining industries geared towards these three areas.

Two years ago, a Japanese team successfully tested a mining tool designed to extract ore from a hydrothermal vent. Thaler also said that both India and China have made significant investments into developing their ability to mine the seafloor.

Looking toward the future of exploration and monitoring in the deep seas, Thaler said that “ocean and conservation technology is in the midst of an evolutionary shift in who has access to the tools necessary to observe the deep ocean.”

One of the ways this is changing is by the evolving Micro Remotely Operated Vehicle (ROV) technology, which are ROVs capable of monitoring and measuring the ocean far below the depths available to scuba divers and are allowing deep-sea exploration to be completed much faster and cheaper than just decades ago.

Thaler said that policy needs to be put into place that accurately reflects how individuals and private organizations are able to get to the bottom of the sea on their own as technological development in the ocean is moving much faster than the policy regime that shapes who can access the high seas.

“We’re approaching a point in time where the factors that prevent most individuals, organizations and stakeholders from accessing the deep ocean are no longer financial or technological. Where a small, creative team with a relatively modest budget and access to the right vessel can open the entire deep ocean for exploration,” said Thaler. 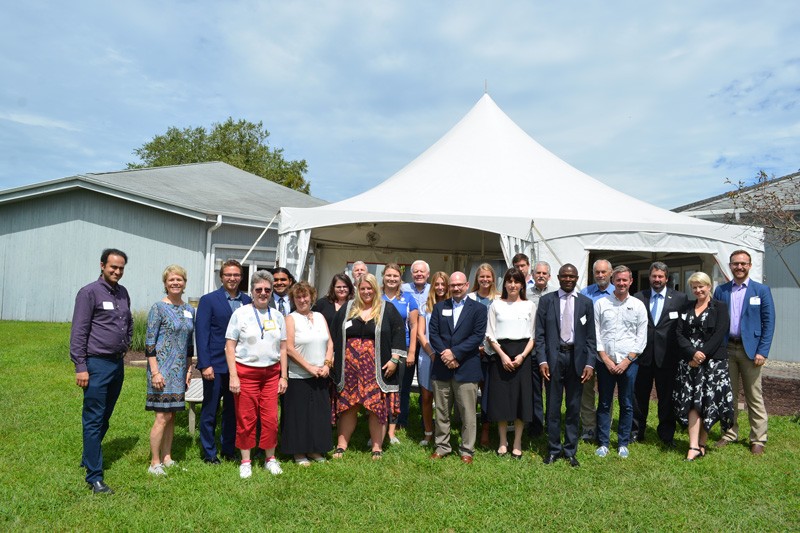 The Minerals, Materials and Society (MMS) program at UD hosted a public symposium on the environmental and social impacts and benefits of mining and other extractive industries under water on Wednesday, August 28 at UD’s Virden Retreat Center on the Hugh R. Sharp Campus in Lewes. Photo by Adam Thomas