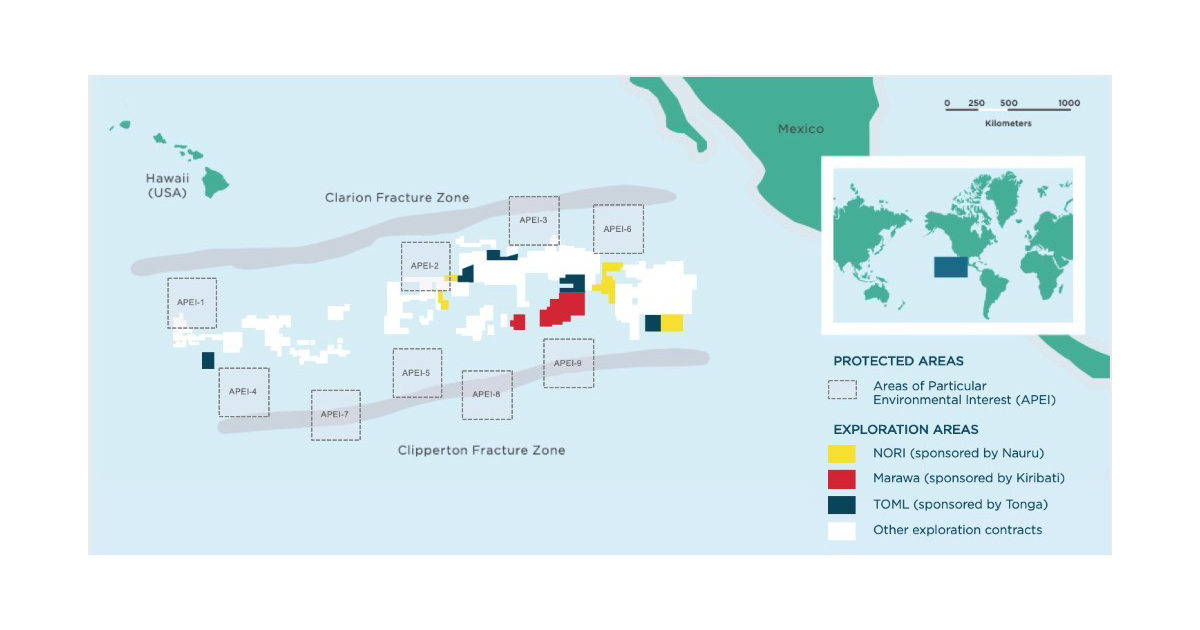 TOML holds an exploration contract granted by the International Seabed Authority (ISA) and sponsored by the Kingdom of Tonga. DeepGreen acquired TOML from Deep Sea Mining Finance Limited. As part of the TOML acquisition, DeepGreen will benefit from existing environmental studies, a Canadian NI 43-101 compliant technical resource report and an intellectual property portfolio.

The acquisition of a third exploration area, together with the news that DeepGreen’s offshore engineering partner Allseas has acquired a former ultra-deepwater drill ship for conversion to a polymetallic nodule collection vessel, makes DeepGreen a front-runner in a new industry that promises to reshape how critical battery metals are sourced, processed and ultimately recycled.

The electrification of global transport and buildout of renewable energy storage will require hundreds of millions of tonnes of nickel, cobalt, copper and manganese. Industry analysts and electric vehicle manufacturers have raised concerns over availability as well as environmental and social costs of producing these metals. Significant shortages in nickel, cobalt and copper have been predicted to emerge in the coming years.

The CCZ seabed contains the world’s largest known deposits of nickel, cobalt and manganese. Several Areas of Particular Environmental Interest encompassing 1.44 million km2 have been set aside, which are intended to represent CCZ habitats and will be protected from resource extraction. Current exploration contracts in the CCZ account for 1.2 million km2 and are estimated to contain enough metal to electrify the entire global car fleet. Confirmed resource in DeepGreen’s combined exploration areas alone contain enough metal to electrify over 250 million vehicles.

“We believe now more than ever that the world needs to work together to find solutions to address climate change. The TOML project will enable us to bring more critical mineral resources to market to break through the bottleneck and shift away from fossil fuels, said Gerard Barron, CEO and Chairman of DeepGreen. "Our research shows that ocean polymetallic nodules can provide society with these metals at a fraction of the environmental and social impacts associated with land-based extraction." 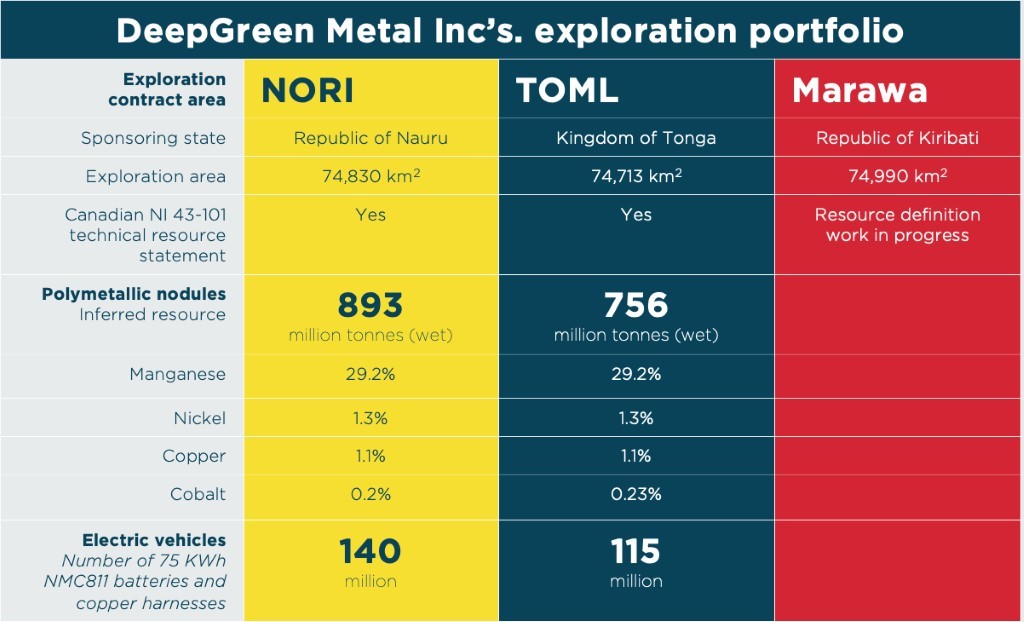 “Collecting these nodules from the ocean will have impacts. Everything we do on this planet, no matter how ‘green’ we consider it to be has an impact,” said Dr. Greg Stone, DeepGreen’s Chief Ocean Scientist and board member. “The question we are trying to solve is, are the impacts of collecting metals from deep in our oceans more acceptable than the known and well documented impacts of mining these metals from terrestrial sources, especially at a time when the green transition will require hundreds of millions of tonnes of these metals”.

In January 2019, DeepGreen commissioned an independently authored study titled “Where Should Metals for the Green Transition Come From?”, a lifecycle assessment of metal production comparing conventional land-based production with expected nodule-derived production. Study results show that shifting away from land ores to polymetallic nodules would allow society to eliminate or dramatically compress the most serious environmental and social impacts associated with conventional metal production, including child labor, tropical deforestation and habitat destruction, large-scale generation of toxic waste, residues and tailings as well as climate change impact through direct emissions and release of sequestered carbon. A summary of the report’s findings are listed in the table below, and the executive summary of the study can be found here: https://deep.green/impact/, or downloadable or at this link. 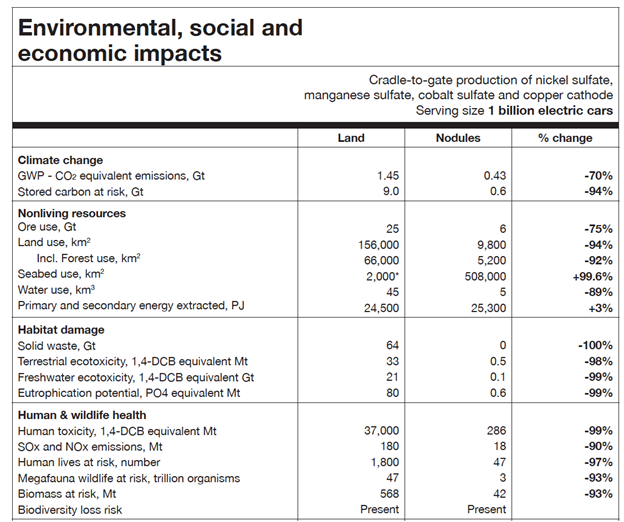 Paulikas et al, Where Should Metals for the Green Transition Come From? LCA white paper, February 2020

Uncertainties remain around the scope and scale of the impact of nodule collection on deep-sea ecosystems and biodiversity. To address these uncertainties, DeepGreen, in partnership with over 100 scientists from the world’s leading marine science institutions, is currently undertaking the world’s largest integrated ocean surface-to-seabed research program encompassing over 75 studies in order to fully understand the impacts of collecting nodules from the ocean floor.

Combining the company’s expanded environmental data library with the ongoing science program will make the Eastern CCZ one of the most well-studied parts of the deep ocean by the time DeepGreen completes its Environmental and Social Impact Statement and applies to the ISA for an exploitation contract in 2022.

The environmental protection of the CCZ as well as the exploration and exploitation of polymetallic nodules are governed by the ISA, an intergovernmental body established by the UN Convention on the Law of the Sea (UNCLOS). UNCLOS stipulates that seabed resources in international waters are “a common heritage of mankind” and shall be used “to promote international cooperation for the overall development of all countries, especially developing States.”

“With DeepGreen, the Kingdom of Tonga has a committed partner dedicated to equitable development of this common heritage resource,” said Gerard Barron.

In addition to TOML, sponsored by the Kingdom of Tonga, DeepGreen’s other contract areas in the CCZ are sponsored by the governments of Nauru and Kiribati, creating a multinational force of Pacific Small Island Developing States that the company believes can help rebalance power in the global development of minerals that are critical for the 21st century.

“Past industrializations had richer countries exploiting the natural resources and labor of poorer countries, which locked them into what became known as the ‘resource curse’, leaving many poorer countries perpetually underdeveloped and unstable,” said Gerard Barron, DeepGreen’s CEO.

“But with the potential for deep-sea nodules to help drive the green transition, our sponsoring states can consider themselves as ‘Big Ocean States’ with real agency through the ISA, enabling Pacific Islanders to shift the balance of power as we take on the urgent challenge of decarbonizing the global economy.”