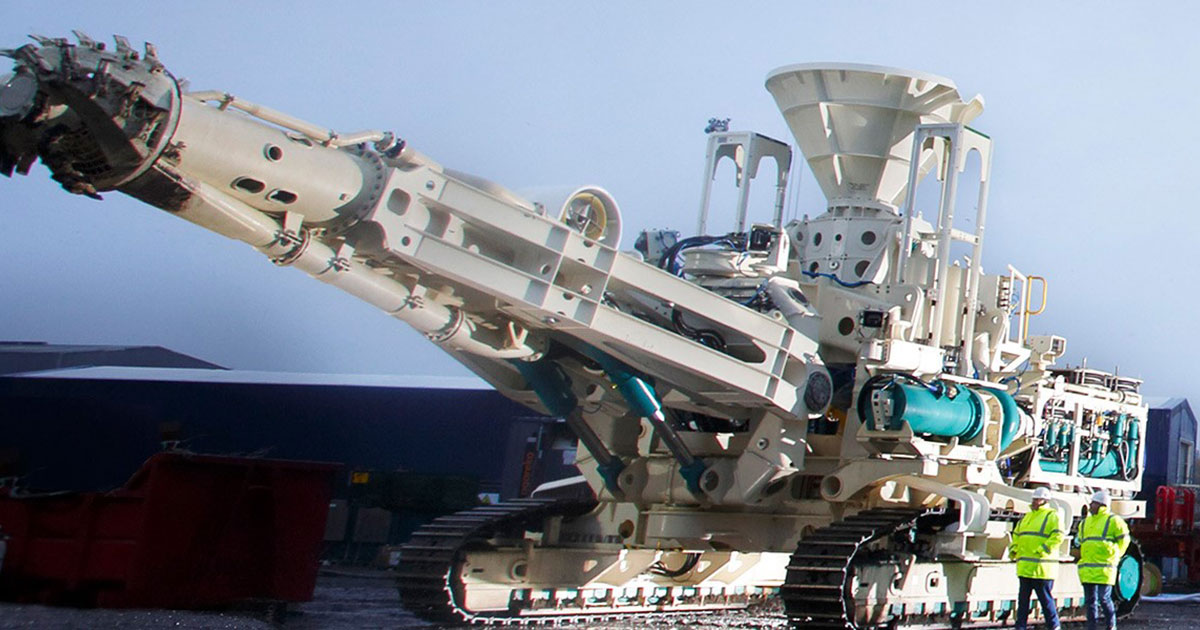 Decades after the discovery of vast deep-sea mineral deposits, has the lure of metal-rich ore finally tempted the mining industry to pillage the deepest frontier?

The technological developments required to exploit the resources known to exist in the harsh deep-sea environment are, although considerable, perhaps the least of the industry’s worries. After all, it can draw on the experiences of the offshore energy industry, where operations at depths of 3-4km are now almost routine.

The real difficulties begin when one tries to align that with the firm commodity prices, structured regulatory framework and environmental understanding of each area to be mined that are required to take the plunge. And then there is the small matter of the social contract: sufficient agreement that the deep ocean should be exploited at all.

The Canadian-registered, Omani and Russian majority-owned Nautilus Minerals may in late 2019 be the first company to commercially exploit a deposit of ‘seafloor massive sulfides’ (SMS). These are a metal-rich crust containing copper, zinc, gold and silver that lie 1,700m below the surface of the Bismarck Sea, the territorial waters of Papua New Guinea.

The world’s first giant deep-sea mining machines were delivered by UK-based Soil Machine Dynamics (SMD) to Nautilus Minerals in Papua New Guinea in 2017. However, none have yet been tested at depth due to contractual problems with completion of the production support vessel being built in China.

SMD’s Solwara 1 project, which aims to extract SMS deposits from the location, uses three machines that are needed to work the metal-rich SMS crusts in the Solwara 1 field. At these depths, copper is found at concentrations of seven times that of the average land-based mine. The first machine used as part of the extraction is the auxiliary cutter, which creates a level working surface for the subsequent bulk cutter and collector machines. 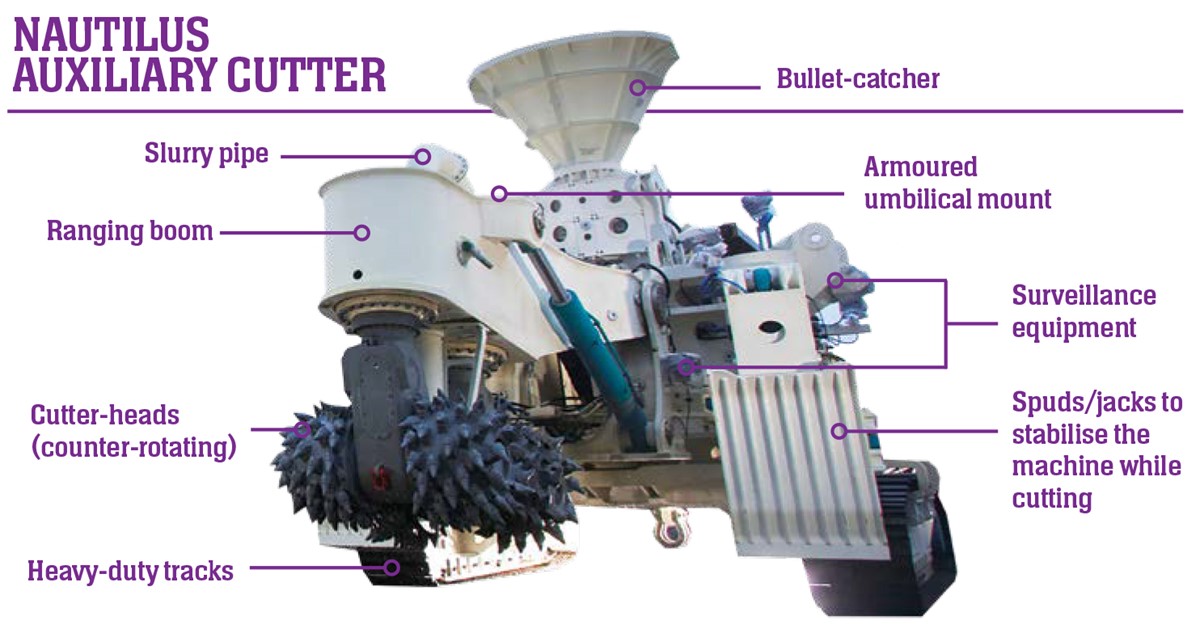 The bulk cutter is the main production machine and the heaviest deep-sea mining unit ever built, weighing in at over 300 tonnes. “Designing a ship-based launch and recovery system was challenging for something of that size,” says Stef Kapusniak, mining business development manager at SMD. “We settled on a cantilever system. The installed power of the cutter head is also bigger than any other rock cutter at 1.2MW. The power is supplied via an umbilical from the vessel.”

In the planned mining technique, the giant bulk cutter grinds up the seafloor with each pass, before the collector sucks up material from the piles made by the bulk cutter, which is then transferred via a riser pipe to the production support vessel on the surface, where it is dewatered. The dewatered ore slurry is transferred to another vessel, which transports it to China for processing.

Each of the mining vehicles is controlled remotely from the ship’s control room via an umbilical. This supplies power to multiple copper cores, as well as communications, data and control commands via fibre-optic cables, which are all wrapped in an armoured casing. The umbilical has a bend restrictor to prevent it from contacting the seabed. Each machine also has an intervention panel that can be accessed by a remotely operated vehicle (ROV), which can help couple and uncouple hoses and tools without the need to return the big machines to the surface and can also help in emergency situations.

An environmental impact statement from the company claims that operations at the mine site will produce minimal particulate plumes – which could potentially smother sea life – on a similar scale to those produced naturally by nearby hydrothermal vents, or ‘hot smokers’.

An additional environmental concern is that once the seawater has been removed from the ore-bearing substrate it must be returned to the ocean, and it too will carry small particles that could form a plume where it is expelled. The concentration of these particles is controlled in the operating licence.

Kapusniak views these concerns with a wry logic: “No one wants their gold dust to float away. We have made and tested key sub-assemblies of the machines and used computational fluid dynamic assessments to optimise the cutter heads so that escape of material is minimised on each machine.”

Japan’s Oil, Gas and Metals National Corporation, JOGMEC, has also been testing deep-sea mining equipment within its exclusive economic zone (EEZ) at the Okinawa trough of the East China Sea. Working at 1,500m, in 2017 the company demonstrated a successful ore-lifting to a surface vessel from a sulfide mound, proving the deep-sea mining concept at depth for the first time.

The economic case for extraction is highly dependent on cyclical commodity prices. Metallic ores such as copper, cobalt, manganese, nickel, tellurium and lithium are vital to produce electric-vehicle batteries, solar panels and wind turbines, and are currently sourced from depleting surface mines. Increasing demand on the supply side is set to drive commodity prices upwards, justifying the exploitation of the ocean and the emergence of a new multi-billion-dollar industry.

Many countries view the development of the deep sea and secure access to its mineral resources as strategically vital. World production of key metals is geographically concentrated; some 97 per cent of global demand for rare earth metals is owing to the manufacture of electronic products, and this currently depends on Chinese land-based supplies. There are other sources that are not currently exploited, notably in Australia. In 2017, the Democratic Republic of Congo was responsible for 58 per cent of global cobalt production, while Chile and Peru were producing 40 per cent of the world’s copper.

The race is on for countries to define the boundaries of their Exclusive Economic Zones (EEZs) – an agreed band of jurisdiction extending 200 nautical miles from a coastal state’s boundaries, and within which the state has special rights of exploration and use of marine resources including mineral resources. Importantly, within these EEZs the state makes the rules.

Small Pacific island nations such as Fiji, Papua New Guinea and Tonga have vast EEZs relative to their populations. These nations see deep-sea mining as a way to boost faltering economies and to offer opportunities for their citizens. The island groups all lie near known subsea deposits. For example, the Cook Islands’ EEZ is estimated to hold 15-20 per cent of the world’s known reserves of cobalt. Such possession is likely to increase in value as cobalt’s role in the post-carbon economy expands its use.

Paul Lynch, of the Cook Islands’ Seabed Minerals Authority, says: “We have passed legislation aimed at a positive conservation and environmental outcome where we will permit zoned areas of resource utilisation across our whole EEZ (almost two million square kilometres). Partnership with the right corporate entities, and training for young Cook Islanders, is essential.”

The players range from small, often precariously funded, entities dependent on repeated rounds of financing, to the state-sponsored efforts of Korea, China, Japan and India. Both the UK and Norway view deep-sea mining as a potentially huge emerging industry where the countries can build on their worldwide expertise in oil and gas technology and, like other state entities, secure access to strategic minerals.

Torgeir Stordal, director of exploration at Norway’s Petroleum Directorate, says: “Right now, the stage of development of this nascent business is like North Sea oil in the 1960s. We are making coarse level mapping of the seabed resources prior to licensing, and companies will make the detailed mapping as part of their exploration effort.” Norway is also assisting developing countries from Madagascar to Nigeria to demarcate their own EEZs, by establishing the outer limits of their continental shelves.

What is unusual about this new industry is that, unlike oil and gas, terrestrial mining or deep sea fisheries, the environmental and regulatory regime will pre-date the development of the industry, and that is important. The mining industry has not exactly covered itself in glory when it comes to environmentally sensitive processes, particularly in the developing world where regulatory regimes are weakly enforced.

Christopher Williams of UK Seabed Resources (wholly owned by Lockheed Martin UK) says: “It is right that this new industry be held to different and higher environmental standards. We will need a social licence from the rest of humanity to exploit the deep sea, as well as an economic, regulatory and contractual licence to do so.” Williams points out that the UN Convention on the Law of the Sea (UNCLOS) requires that the International Seabed Authority (ISA) is bound to make the regulations equitable with land-based mining.

If there has not yet been a subsea ‘El Dorado’ for mining companies, the pre-exploration mapping phase has heralded a golden age for deep-sea biology. This is because the economic mapping of mineral deposits goes hand-in-hand with the requirement for the assessment of marine biodiversity in depths that are rarely accessed by national scientific cruises.

Some 26 exploration contracts of 15 years each had been approved by the ISA as of May 2017, covering an area of seabed of 1.2 million square kilometres. During only two UK Ship Register (UKSR)-funded research and mapping cruises in the Pacific Ocean Clarion-Clipperton Zone, marine scientists spent a combined 50 days on station and covered over 700km of seabed. These scientists were also generating over 57,000 images of the seafloor, collecting more than 23,000 samples and, as of 2017, producing 50 peer-reviewed academic papers and conference presentations.

Slowly but surely, all of the elements required to propel this nascent area into a fully fledged industry – even outside those EEZs – are floating into place.