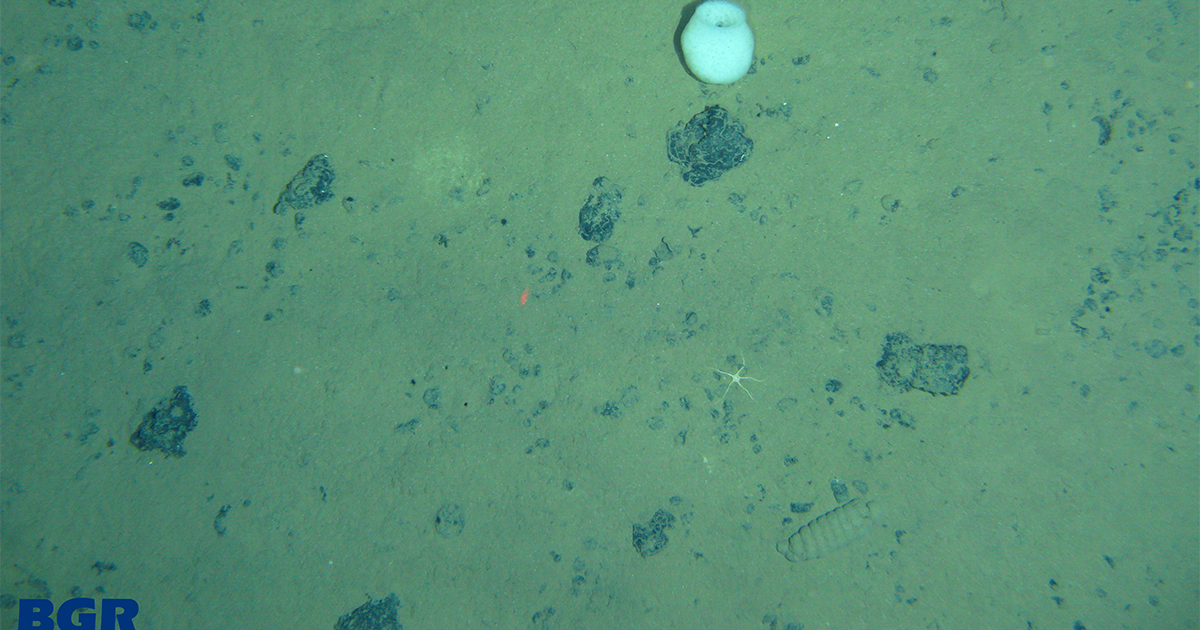 Although they cannot be seen, thousands of small organisms smaller than 1 mm occur below 100 ccm of sediment of the abyssal seafloor, the habitat of benthic meiofauna in the polymetallic nodule belt in the Pacific. The large organisms are a brittle stars and a sponge (copyright Bundesanstalt für Geowissenschaften und Rohstoffe, BGR).

Researchers from Senckenberg am Meer (Senckenberg by the Sea) and the Federal Institute for Geosciences and Natural Resources developed a new method intended for establishing protection zones for the deep-sea fauna in the Clarion-Clipperton fracture zone.

The abyssal plain is earmarked for the potential extraction of manganese nodules. In their study, published today in the Journal of Applied Ecology, the team advocates the timely establishment of preservation zones from which deep-sea species can recolonize destroyed areas.

The deep sea is a habitat with an extremely high biodiversity, yet, compared with many near-shore habitats, it is only inhabited by few members of any individual species. Therefore, the distribution of the meiofauna – animals smaller than one millimeter that live in the sediment – is highly variable.

This group primarily consists of nematodes and copepods. “However, we can also find tardigrades, ostracods, kinorhynchs (“mud dragons”) and several other groups of animals in the deep-sea sediment,” explains Katja Uhlenkott, a doctoral student at the German Center for Marine Biodiversity Research at Senckenberg am Meer, and she continues, “The planned underwater mining in the Clarion-Clipperton fracture zone would lead to serious damage and the permanent destruction of the habitat of animals living there.”

Together with a team of scientists, Uhlenkott developed a new method, which is intended to be used to establish protection zones for the deep-sea animals in the Clarion-Clipperton fracture zone. In the new procedure, distribution models of the occurrence of the meiofauna in the German research area within the abyssal zone were calculated based on the “random forest” algorithm. Using a cluster analysis, these distribution models, the ocean floor’s bathymetry, and the modelled manganese nodule cover could be used as a basis for identifying similar areas within the research area.

“This allows us to select the location of preservation zones based on objective factors instead of merely depending on personal recommendations by experts,” explains Uhlenkott. The researchers hope that the International Seabed Authority will adopt this method as a standard procedure. The authority is responsible for deep-sea mining in international waters and has already introduced an extensive set of rules, the so-called “Mining Code.” “The use of distribution models for the meiofauna group would be a first step toward the establishment of objective preservation zones in a potential deep-sea mining region,” adds the marine researcher from Wilhemshaven in closing.

Katja Uhlenkott, Senckenberg am Meer, German Center for Marine Biodiversity Research (DZMB)
Phone 04421 9475-171
This email address is being protected from spambots. You need JavaScript enabled to view it.