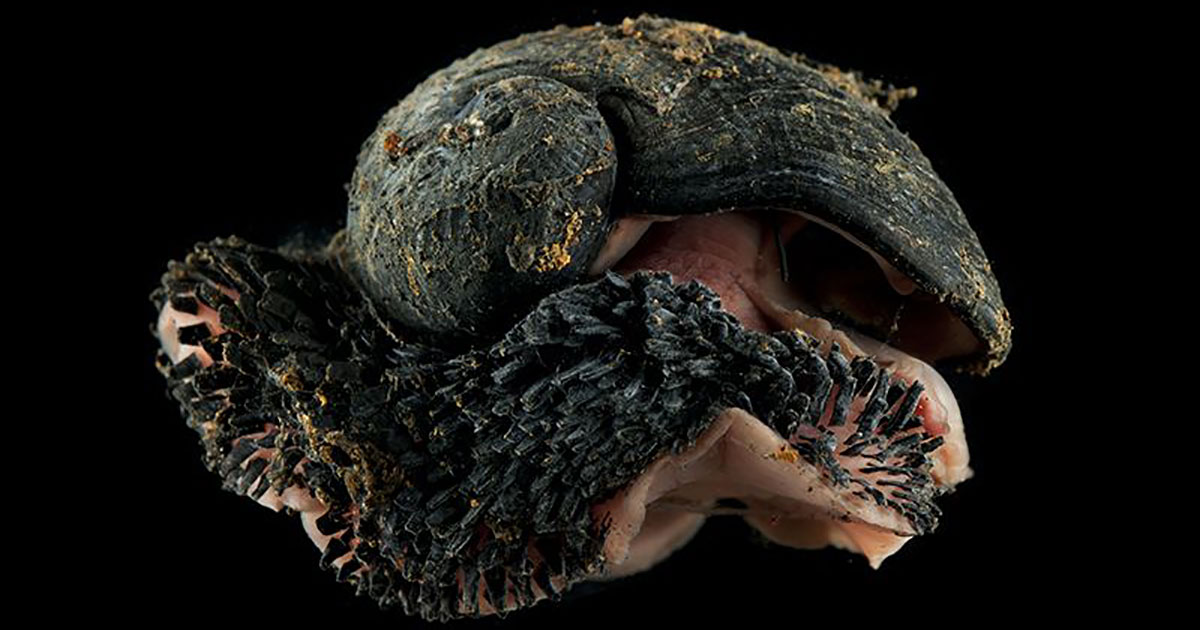 A snail that lives near hydrothermal vents on the ocean floor east of Madagascar has become the first deep-sea animal to be declared endangered because of the threat of mining.

The International Union for Conservation of Nature (IUCN) added the scaly-foot snail (Chrysomallon squamiferum) to its Red List of endangered species on 18 July — amid a rush of companies applying for exploratory mining licenses.

“This is an important step towards alerting policymakers to the potential impacts deep-sea mining may have on biodiversity,” says Lisa Levin, a biologist at the Scripps Institution of Oceanography in La Jolla, California. [Read an opinion article co-authored by Levin in ECO’s 2019 Deep Sea issue]

Two of those three vents are currently under mining exploration licenses, says Sigwart, who co-authored a Commentary on the snail’s listing in Nature Ecology & Evolution, published on 22 July.

Even one exploratory mining foray into this habitat could destroy a population of these snails by damaging the vents or smothering the animals under clouds of sediment, says Chong Chen, a deep-sea biologist and Commentary coauthor at the Japan Agency for Marine-Earth Science and Technology in Yokosuka.

For decades, mining companies have been looking to extract valuable minerals and metals that form near hydrothermal vents. When the hot, mineral-laden water from a vent mixes with cold seawater, it deposits materials, such as manganese and copper, on the ocean floor. Collecting these deposits was once considered too difficult and expensive. But technological advances are now making it economically feasible.

Full-scale mining can’t begin in international waters until the International Seabed Authority (ISA) — a United Nations agency tasked with regulating sea-bed mining — finalizes a code of conduct, which it hopes to do by 2020.

Levin cautions that it’s not yet clear what effect the presence of an endangered species would have on the regulation of mining activities. “The [ISA] regulations are still being drafted, and there’s currently debate over whether environmental guidelines will be mandatory or just recommended,” she says.

Sigwart and Chen say that now is a good time to raise awareness of the vulnerability of hydrothermal-vent ecosystems. Getting the scaly-foot snail on the Red List is the first step. “Being on that list means something to policymakers and ordinary people,” says Chen.

The biggest challenge to determining whether the scaly-foot snail warranted inclusion on the Red List was figuring out how to assess the extinction risk for animals that live in one of the weirdest habitats on Earth, says Elin Thomas, a graduate student in Sigwart’s lab and a coauthor of the Nature Ecology & Evolution Commentary.

When the IUCN considers whether to include an organism on the Red List, researchers examine several factors that could contribute to its extinction. They include the size of a species’ range and how fragmented its habitat is.

But hydrothermal vents naturally occupy relatively small areas of the sea floor, says Thomas. And they occur only where ocean water that has percolated into Earth’s crust can shoot back out into the deep sea, resulting in a spotty distribution.

After discussions with the IUCN and other researchers, Sigwart and her team settled on two criteria that they could use to assess the extinction risk for deep-sea species: the number of vents where they’re found, and the threat of mining.

In addition to the scaly-foot snail, the researchers are assessing at least 14 more hydrothermal vent species for possible inclusion on the Red List later this year.

Too soon to tell

Chen is optimistic that Red-List status will dissuade investors from pursuing projects that could harm endangered species. He points to organizations such as the World Bank, that require groups applying for grants to consider the effects that their projects could have on Red Listed species.

But Holly Niner, who studies ocean environmental policy at Aalborg University in Denmark, says it's too soon to know how the presence of endangered animals will affect deep-sea mining activities. Hopefully regulatory officials and industry will protect vulnerable areas and direct mining operations to less sensitive habitats, she says.

“These are fragile areas under threat, and it’s not like we researchers can start a breeding program for deep-sea-vent creatures,” says Sigwart. “We can only try to protect what’s there.”