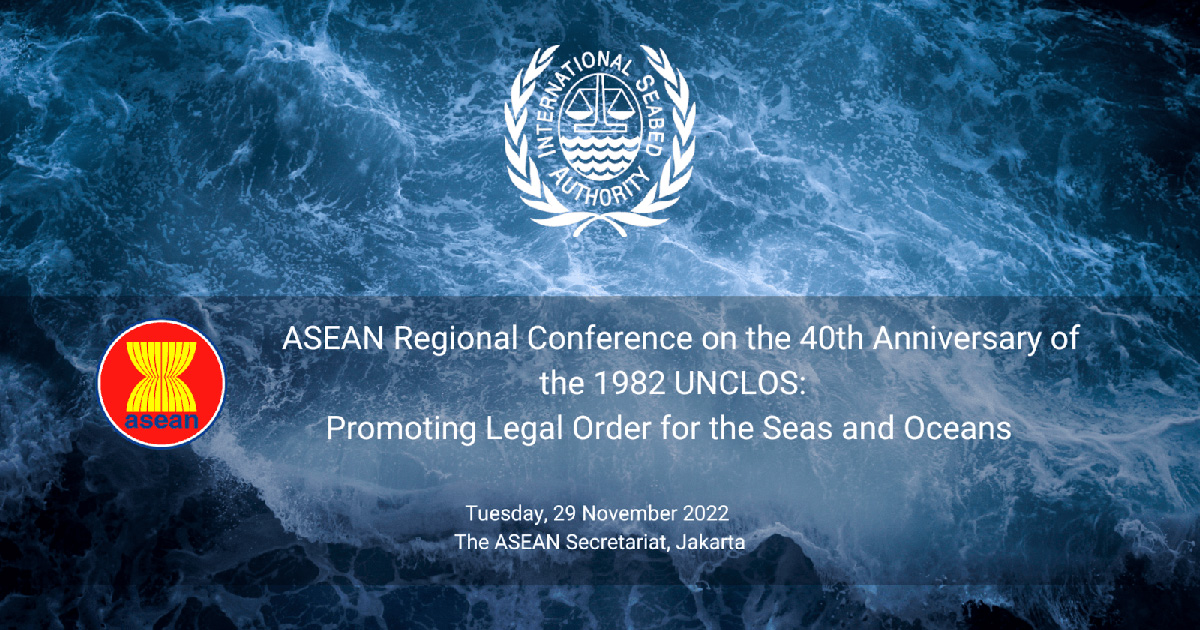 The Secretary-General of the International Seabed Authority (ISA), H.E. Mr. Michael W. Lodge, was invited to address the Association of Southeast Asian Nations (ASEAN) Regional Conference organized in celebration of the 40th anniversary of the United Nations Convention on the Law of the Sea (UNCLOS).

Mr. Lodge underscored the fundamental role that UNCLOS has played over the last 40 years in promoting legal order and peace in the oceans as well as the importance of the legal regime for the deep seabed beyond national jurisdiction – the Area – in the overall framework set out by UNCLOS and the 1994 Agreement as a “concrete example of how the international community can come together to ensure sound and careful management of global public goods for the benefit of humanity as a whole”.

Reflecting on some of the most pressing challenges imposed on the full and effective implementation of this legal regime, which has progressively gained near-universal participation, Mr. Lodge stressed the need to reinforce multilateralism as a prerequisite to maintaining peace and global order in the ocean. “Multilateralism is in retreat and (…) the rule of international law is threatened by unilateral action. Inequity is increasing and the prospects of achieving the Sustainable Development Goals by 2030 become more challenging each year,” he said.

“The regime for the deep seabed lies at the heart of the entire system of global ocean governance under UNCLOS. The regime and the institution it created – ISA – provide a central platform for trade-offs between States based on consensus building. Without ISA, we could easily have seen rampant, unrestrained exploitation of the deep seabed and appropriation of its resources for the benefit of only a few,” Mr. Lodge added.

Mr. Lodge also underscored that it is essential that the States Parties and relevant stakeholders strengthen their collective action to ensure that this framework is respected and enforced. In that regard, Mr. Lodge made three important points. First, we should not take UNCLOS for granted, even though it has ensured peace at sea for 40 years. Second, each State should take a consistent approach to implementing the provisions of UNCLOS without picking and choosing only certain elements of the regime. Third, the institutions created by UNCLOS should be strengthened, not undermined.

“As we mark the 40th anniversary of its adoption, I trust that together we will be able to unite once again around the vision of peace, security and cooperation reflected in UNCLOS,” Mr. Lodge said.

“I hope we can also work together to promote equitable and efficient utilization of the ocean’s resources to achieve the economic and social advancement of all peoples of the world. It is our joint responsibility and our legacy,” he concluded.