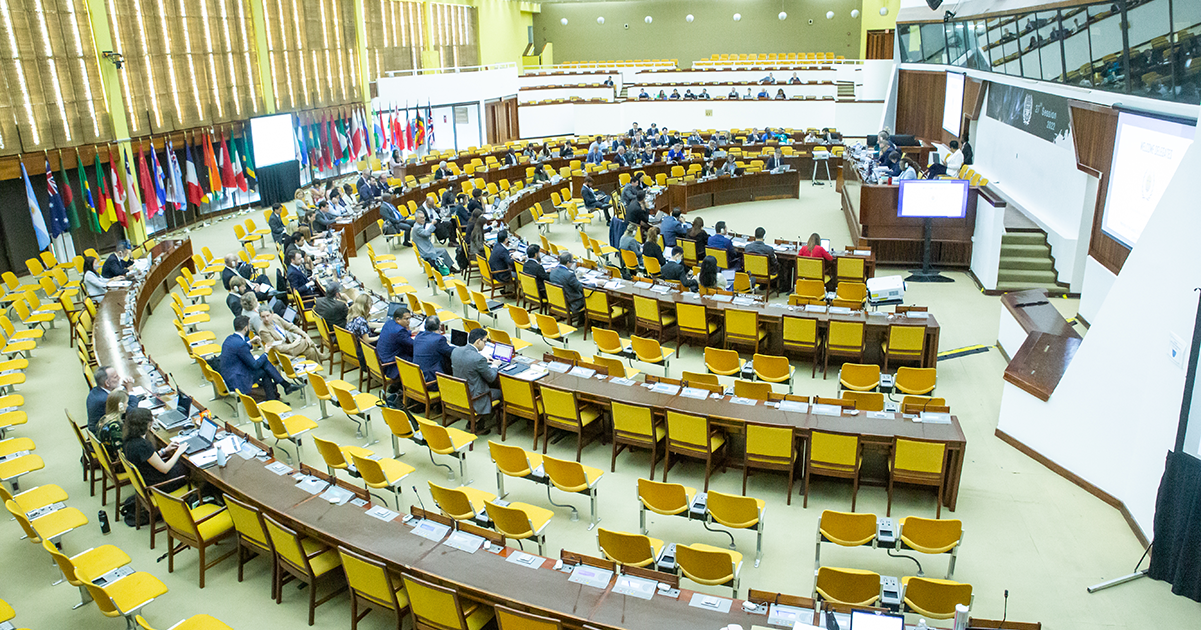 Credit: The Council of the International Seabed Authority (ISA)

The Council of the International Seabed Authority (ISA) opened the meetings of Part III of its 27th session on Monday, 31 October 2022. The Council will meet in person for ten days until 11 November 2022. The main item on the agenda of the Council is the draft regulations on the exploitation of mineral resources in the Area (ISBA/25/C/WP.1) prepared by the Legal and Technical Commission and submitted to the Council in March 2019.

In his opening remarks, the Secretary-General of ISA, H.E. Mr. Michael W. Lodge, welcomed the delegates to Jamaica and thanked the Jamaican government for their efforts to make the Jamaica Conference Centre available for the meetings despite ongoing renovation works.

Mr. Lodge also thanked the facilitators of the working groups created by the Council to advance the development of the draft exploitation regulations for providing revised, marked-up texts for consideration by Members of the Council promptly since Part II of the meetings that took place in July.

“This is a historic meeting,” Mr. Lodge said. “It is the first time we have held a third session of the Council since 2000, when the Council met three times to complete the work on the first set of draft regulations on exploration for polymetallic nodules. Twenty-two years later, we also find ourselves at a critical phase of the implementation of the legal regime for the Area as we continue to intensify our work on the draft regulations for exploitation in the Area.”

“I wish to express my appreciation to all those many delegations that have contacted me to express their strong and steadfast support for the work of the Council, as well as all those who have submitted comments and proposals on the various texts. I cannot fail to be impressed by the dedication and commitment shown by delegations to the fundamental mission of carrying out the mandate of the Convention and the 1994 Agreement,” he added.

A busy agenda for the coming two weeks

After adopting the agenda under the presidency of Mr. Tomasz Abramowski (Poland) for the 27th session, the informal working group on inspection, compliance and enforcement established during Part II of the 26th session of the Council in February 2021 and facilitated by H.E. Dr. Maureen P. Tamuno (Nigeria), held its third meeting and resumed discussions on the facilitator’s text.

The other informal working groups established by the Council in February 2021 will also continue their discussions on regulations related to the protection and preservation of the marine environment, facilitated by Dr. Raijeli Taga (Fiji), and on institutional matters, co-facilitated by H.E. Ms. Georgina Guillén Grillo (Costa Rica) and H.E. Ms. Constanza Figueroa Sepúlveda (Chile), over the course of the two weeks of meetings.

The open-ended working group on the financial terms of contracts, established by the Council in July 2018 to discuss a financial model and payment mechanism for deep-sea mining and chaired by Mr. Olav Myklebust (Norway), will hold its sixth in-person meeting and will resume its discussions on the Chair’s text.

Other items on the agenda include the transfer of rights and obligations under a contract for exploration, the standardized procedure for the development, review and approval of regional environmental management plans, the draft regional environmental management plan for the area of the northern Mid-Atlantic Ridge and the operationalization of the Enterprise and the Economic Planning Commission.

It is also expected that the Council will review progress made during 2022 against elements of the roadmap and consider necessary intersessional work.