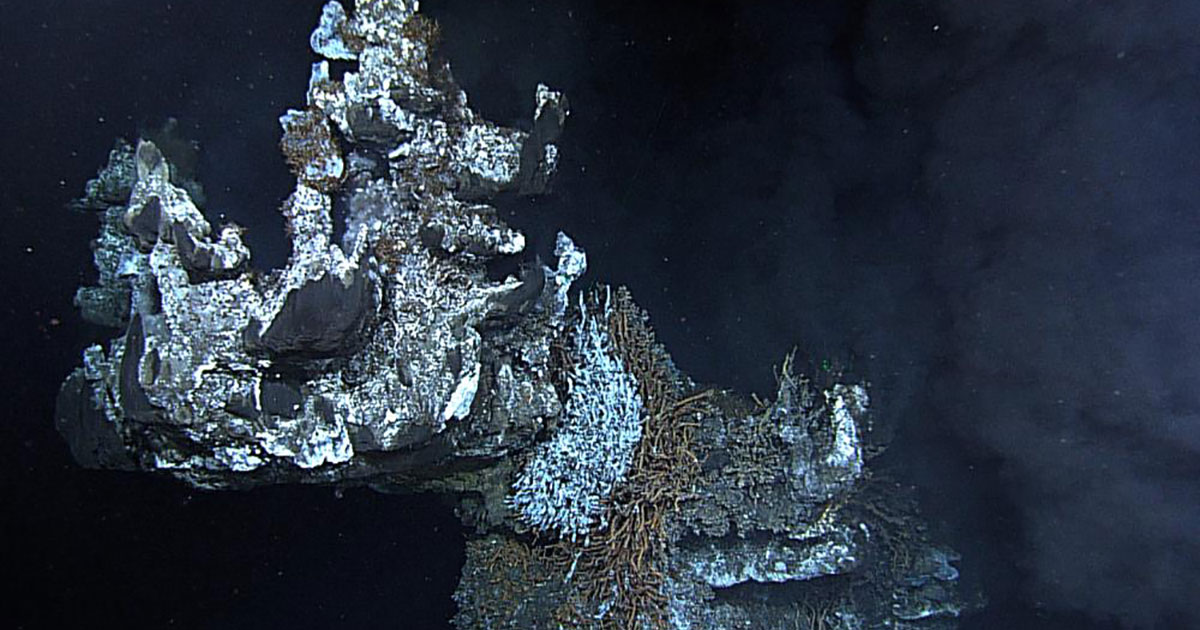 If you ask someone to describe the deep sea, the response is often a depressing description of a barren landscape devoid of life; one of such crushing pressure and eternal darkness that the chance of life surviving here seems only possible in stories of science fiction.

So, it would probably surprise you to hear that there are rich, deep-sea ecosystems under threat from an emerging ocean industry… and virtually no-one knows about it.

Amber Cobley is speaking at Exploring the Deep at Edinburgh Science Festival, taking place at the National Museum of Scotland on Saturday 6 April. Tickets and more information is available here.

Within the next decade, the deep-sea mining industry plans to send 300-tonne vehicles to harvest tens of thousands km2 of deep seafloor for minerals considered vital to the future of green technology. But these hard mineral resources are also home to fragile and diverse ecosystems, some new to science and some yet to be found.

Of these, nodules and seafloor massive sulfides are likely to be exploited first.

Many believe it was John Mero’s book The Mineral Resources of the Sea that began the deep-sea gold rush in the early 1960s.

Mero proclaimed that “once these nodules are being mined, the minerals industry would be faced with the very interesting situation of working deposits that grow faster than they can be mined” – a utopian, sustainable industry that seemed too good to be true.

These possible riches of the deep were so tempting that deep-sea mining was added to the agenda of the UN General Assembly for discussion in 1967.

Fast-forward to today, and we know manganese nodules actually take 10,000 to 1 million years to grow, gradually accreting many layers of polymetallic oxides from surrounding waters and everything from volcanic debris and prehistoric shark teeth forming their core.

“Fields” of these nodules cover huge areas of some abyssal plains around the world, covering ~6 million km2in the North East Pacific alone. The nodules are rich minerals of economic interest such as Nickel, Copper, Cobalt, Lithium and Rare Earth Elements, a group of elements vital for green technology, such as neodymium magnets for wind turbines and hybrid cars.

In contrast to the nodules that carpet large areas of abyssal plains, the seafloor massive sulphides that form at hydrothermal vents occur in very small patches, typically along undersea volcanic rifts. Cold seawater percolates into oceanic crust at these rifts, where it becomes heated geothermally and leaches minerals from surrounding rocks.

These hot fluids burst out of the crust, precipitating minerals to form the seafloor deposits. These can be formed subsurface, or on the seafloor where the “chimneys” of hydrothermal vents tower up to 30m tall, all enriched in minerals such as Iron, Zinc, Copper, Lead, Gold and Silver.

Despite proving that nodules do not grow back soon after they are mined, some industry experts now think the higher mineral concentrations of deep-sea deposits could mean a smaller impact footprint than land-based methods.

But many scientists and conservation groups caution that at this moment in time, there is simply not enough known about life in our deep-oceans for the industry to begin mining safely.

Without the basic understanding of the species that make up these ecosystems and how they function, we cannot assess any potential impacts deep-sea mining may have that could cause serious, irreversible harm to our marine environment.

Both resource types provide hard surfaces for many species to attach to and create biodiversity hotspots filled with organisms often new to science. However, low food availability, cold temperatures, and low disturbance levels at nodule fields means these communities are predicted to be ill-adapted to cope with mining impacts. Scientists predict any recovery post-mining to be at decadal, if not centurial time scales.

Experts anticipate responses of vent populations to mining impacts to be different to those at nodules, as their ecosystems experience disturbance when the venting fluids supporting them “turn on and off”. However this disturbance occurs at time scales varying from tens to thousands of years, depending on vent location.

Caution is therefore advised towards these complex ecosystems until we have a better understanding of their processes, with many scientists and conservation groups calling for a ban on mining active “switched on” vents altogether.

The variation between ecosystems at different resource types means management of environmental impacts must be based on scientific understanding of each of the three resource types individually. This triples the workload for the International Seabed Authority, the UN regulator of deep-sea mining on the international seabed, on which the majority of these mineral resources are located.

Although previously criticised for a lack of transparency and inclusivity during this process, a recent step-change by the International Seabed Authority leaves some stakeholders more optimistic and hopeful for an increased and continued focus on regulation underpinned by scientific evidence. Without that evidence, many are still concerned that we risk ending up in a situation where we aim for a green economy to protect one environment, whist causing avoidable harm to our deep oceans.

The ISA says it will have finished writing regulations allowing for the commercial exploitation of all deep-sea minerals by 2020, after which mining could begin.

The race is now on to feed knowledge of these unique and fragile ecosystems into environmental safeguarding of this industry, to ensure that deep-sea mining is governed by environmental regulations that avoid mistakes of generations past in other habitats.