Deep-Sea Mining as a Political Tool 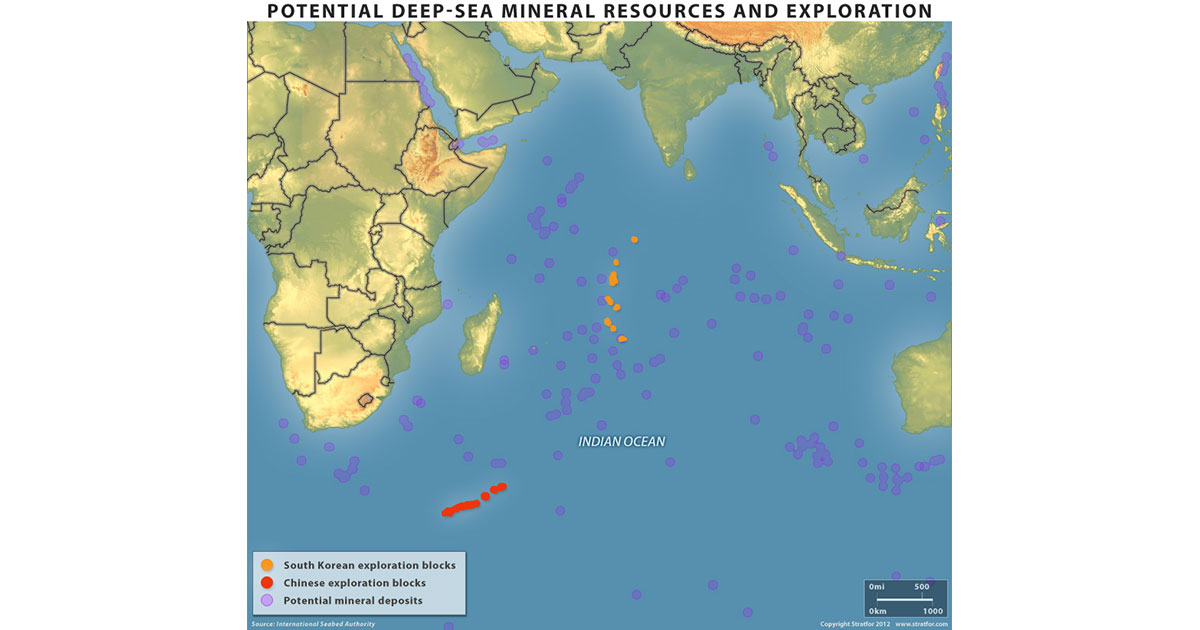 Seoul will retain those rights from 2013 to 2027, a period during which the block is expected to yield $300 million in minerals annually.

South Korea's acquisition exemplifies a growing global interest in a mineral-extraction method that has intrigued state-run and private operators alike: deep-sea mining. Financial considerations underlie the interest in deep-sea mining; the method may be an attractive prospect for operators seeking alternate mineral sources as their reserves deplete or as their access to reserves is curtailed by competing political and economic interests. For states, deep-sea mining is an effective means of accessing and monitoring international or disputed waters. As such, the method serves a political purpose.

Deep-sea mining entails exploiting the ocean floor for several types of mineral deposits, which contain manganese, copper, cobalt and nickel. These are found in what are known as polymetallic nodules and in cobalt-rich crusts. In some places, the seabed is laced with underwater thermal vents, which produce sulfide deposits that can contain such metals as gold, silver, copper and zinc. Mud found in some regions of the ocean floor can also contain rare earth elements. There are no completely reliable estimates of the size of potential global reserves, but initial indicators point to the presence of large reserves. One estimate places cobalt reserves alone at 1 billion metric tons. In comparison, the current worldwide supply of cobalt found on land is an estimated 15 million metric tons.

But recovering these minerals requires first locating them, and while exploration continues to advance, much of the ocean floor remains unexplored. Once identified, the minerals need to be extracted by a process that requires technoloy that can operate in rugged conditions and at depths ranging from 350 to 6,000 meters (about 1,150 to 19,700 feet). Equipment currently used by De Beers to mine diamonds off the coast of Namibia reaches depths of 90 to 140 meters.

Deep-sea mining also requires submersible remotely operated vehicles to recover raw material and bring it back to the surface. There are currently two main types of recovery systems: hydraulic suction, which uses a vacuum-like apparatus to suck the rock formations to the surface; and what is known as a continuous-line bucket system, whereby the sea floor is dredged and then lifted to the surface. After ore is brought to the surface, a surface-support ship transports the ore to shore for processing.

Interest in underwater mineral exploration began in the 1960s and 1970s, but high operating costs and insufficient technoloy hampered development. Several private companies have shown a continued interest in deep-sea mineral exploration. The industry leader is Canadian firm Nautilus Minerals, Inc. The company is slated to begin commercial production off the coast of Papua New Guinea in 2013, though that project has undergone several delays.

In addition to private companies, several countries, including China, Japan and South Korea, are pursuing the requisite technoloy to perform deep-sea mining operations. In June, a Chinese research vessel, the Jialong, completed its deepest submersible dive yet, reaching a depth of just over 7,000 meters. With the ability to reach such depths, China can access 99 percent of the ocean floor. The Jiaolong could begin exploring the South China Sea in 2013.

In the past, China has used enery exploration projects as a tool to stake a claim on the South China Sea. Thus, the advances made by the Jiaolong could be seen as an effort to stake a claim on any possible resources there. Indeed, deep-sea mining exploration could spread China's influence in the South China Sea, the East China Sea and the Indian Ocean. More recently, the International Seabed Authority approved China's bid to explore a 10,000-square-kilometer area in the southwest Indian Ocean for a total of 15 years.

India is concerned with what it sees as foreign encroachment near its territory. When the International Seabed Authority awarded the Indian Ocean block to China, New Delhi said the Chinese would use exploration activities for strategic purposes in the region. To maintain its competitiveness, India has pursued deep-sea mineral exploration — the country reportedly has capabilities to conduct operations at 6,000 meters. India is trying to improve its deep-sea mining capabilities further by acquiring two new ships.

The discovery of rare earth elements within the Japanese exclusive economic zone illustrates one of the political motivations behind the development of deep-sea mining technoloy. Japan is a large producer of high-tech electronics — cellphones, flat-screen TVs and wind turbines, for example — that require rare earth elements to function. China currently controls more than 90 percent of the rare-earth-element market. A source of rare earth elements independent of China could strengthen Japan's economic security. Of course, Tokyo could seek alternative processing sites outside of China, but domestic access to reserves is more beneficial. Accordingly, Japan is planning to spend between $241 million and $361 million to subsidize the development of robotic deep-sea mining technoloy.

Historically, South Korea has tended to lag behind China and Japan in the deep-sea mining sector. However, South Korea's recent central Indian Ocean acquisition — in addition to three other ocean-floor acquisitions — and continued technological development show Seoul's drive to compete in the mineral-acquisition industry. Like Japan, South Korea likely is doing so to obtain resource security and regional competitiveness.

Several other countries, including France and Russia, are interested in deep-sea mineral exploration and operate throughout the Pacific and Atlantic oceans.

China has said it wants to begin production using deep-sea mining by 2030. Japan recently announced a much less realistic three- to five-year goal. With constant technological development and with a similar schedule to Nautilus Minerals — the Canadian firm received approval to begin exploration in 1997 — China could attain its goals.

However, finances must be considered. Many believe deep-sea mineral extraction will never be financially viable. While rocks from the ocean floor frequently contain more concentrated amounts of mineral ore than their land-based counterparts, operators are unsure if a higher potential yield can justify the price of deep-sea mining.

Private companies such as Nautilus Minerals apparently are convinced such operations will become economically viable. Several other companies are also interested in taking the potential financial risk associated with deep-sea mining.

Countries likewise are interested in accessing new mineral resources and profiting from them. But as shown by China and Japan, countries often are guided by factors other than profit — such as territorial security. Initial exploration becomes a useful political tool because it provides an excuse to operate in disputed or international waters.