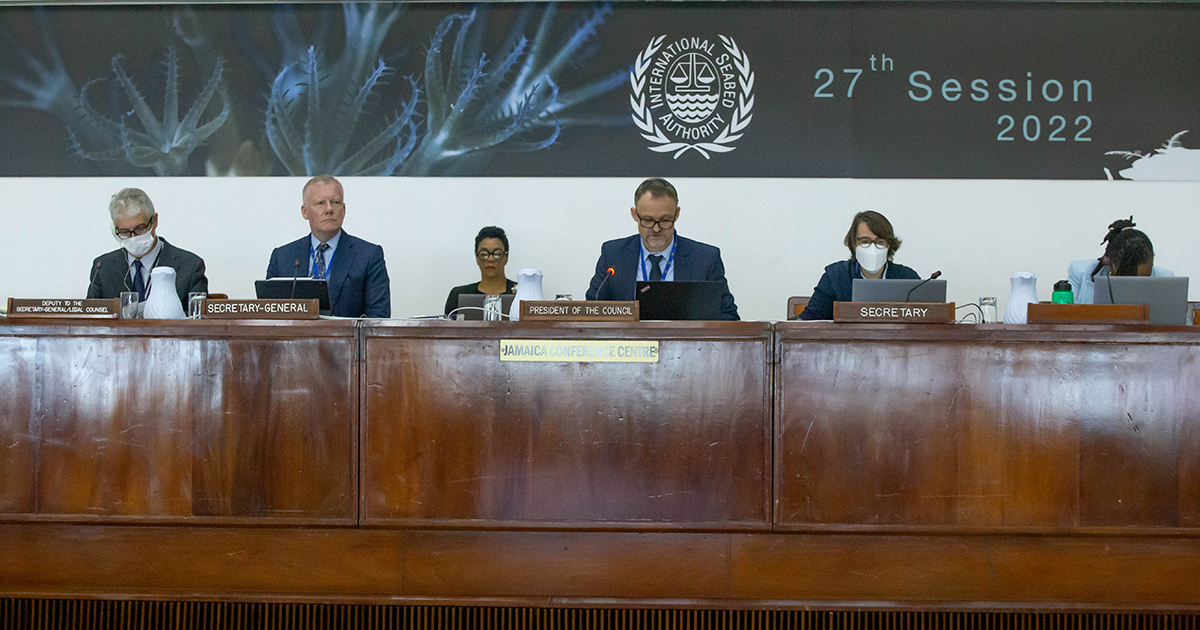 Credit: The Council of the International Seabed Authority (ISA)

The Council of the International Seabed Authority (ISA) opened the meetings of Part I of its 27th session on Monday, 21 March 2022. The ISA Council will be meeting for ten days until 1 April 2022. All 36 members are in attendance, whether in person or through a video link. The main item on the agenda of the Council is the Draft regulations on exploitation of mineral resources in the Area (ISBA/25/C/WP.1) prepared by the Legal and Technical Commission (LTC) and submitted to the Council in March 2019.

In his opening remarks, the Secretary-General of ISA, H.E. Mr. Michael W. Lodge, welcomed the delegates and expressed his appreciation to the President of the 26th session of the Council, Rear Admiral (Retd.) Md. Khurshed Alam (Bangladesh) for “steering the ship” over the last two years under the difficult and unprecedented circumstances of the COVID-19 pandemic. Mr. Lodge thanked the members of the LTC who met between 14 and 18 March. He also thanked the facilitators of the working groups created by the Council to advance the work on the draft exploitation regulations. Secretary-General Lodge further highlighted the efforts made by several Member States and Contractors who contributed to the voluntary trust funds of ISA for a total of USD120,000 since December 2021. These contributions will allow delegates from developing States to participate actively in the work of the different organs of ISA and support the work of the Special Representative of the Secretary-General for the Enterprise.

Opening the session, acting president of the Council for the 26th session, H.E. Ms. Alison Stone Roofe of Jamaica, invited the Council to observe a moment of silence in memory of the late Mr. Nii Allotey Odunton of Ghana, former Secretary-General of ISA, who passed on 13 February. “Mr. Odunton dedicated most of his life to the law of the sea and was dedicated to advancing knowledge of deep-sea mining. We offer our deepest condolences to his family. May he rest in peace,” Ms. Stone Roofe said.

Remembering his predecessor, Secretary-General Lodge added: “His legacy continues in the form of the Nii Allotey Odunton Museum, which was a dream of his for many years. The museum was inaugurated in 2019 on the occasion of the 25th anniversary of ISA, where he was present as a guest of honor. I would like to convey our deepest condolences to his family. We remember him with great affection.”

Members of the Council proceeded with the election of Mr. Tomasz Abramowski (Poland) as the President of the 27th Council session. The following country representatives were elected as Vice Presidents for each regional group: Canada (Western European and others Group), Jamaica (Group of Latin American and the Caribbean States), Sierra Leone (African Group) and Korea (Asia and the Pacific Group).

After adopting the agenda of the Council, members discussed the report of the LTC Chair, Mr. Harald Brekke (Norway), on the phase-one draft standards and guidelines developed by the LTC in 2020 and 2021 to supplement the regulations.

The open-ended working group on the financial terms of contracts, established by the Council in July 2018 to discuss a financial model and payment mechanism for deep-sea mining and chaired by Mr. Olav Myklebust (Norway), resumed its discussions in the form of its fourth in-person meetings.

The first week of Part I of the 27th session of the Council will also be an opportunity for the three informal working groups established during Part II of the 26th Council session in February 2021 to meet. The groups will start their work and consultations on i) the protection and preservation of the marine environment, facilitated by Dr. Raijeli Taga (Fiji) ii) inspection, compliance and enforcement, facilitated by H.E. Dr. Maureen P. Tamuno (Nigeria) and iii) institutional matters, co-facilitated by H.E. Ms. Georgina Guillén Grillo (Costa Rica) and H.E. Ms. Constanza Figueroa Sepúlveda (Chile).