The Future of Deep Seabed Mining 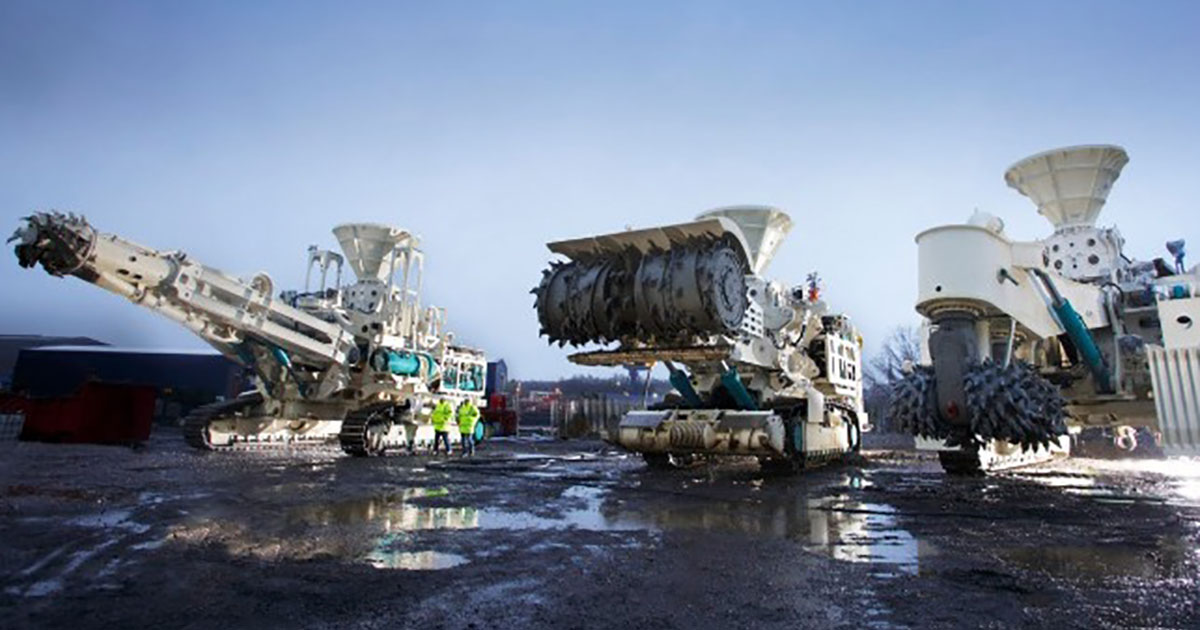 It’s one of the coldest, darkest places on earth, full of marine life – much of which is yet to be discovered – with a seabed rich in mineral deposits.

In the last decade, the floor of the deep ocean that lies outside the jurisdiction of any one country has been increasingly explored. A number of parties are assessing the size and extent of mineral deposits that could provide raw materials for everything from batteries and jet engines to wind turbines and mobile phones.

Some deep seabed mining has already taken place within countries’ waters: Japan in 2017, and in Papua New Guinea where the controversial Solwara 1 mining project has ground to a halt. But this year will see a critical global debate on how to manage the resources that lie in “the area” – international waters of more than 200 metres deep that cover nearly two-thirds of the earth.

The question of who mines these – and how – is due to be formalised in a “code” being drawn up by the International Seabed Authority (ISA), the UN–appointed body responsible for managing the riches of the deep seabed for the “common heritage of mankind”. 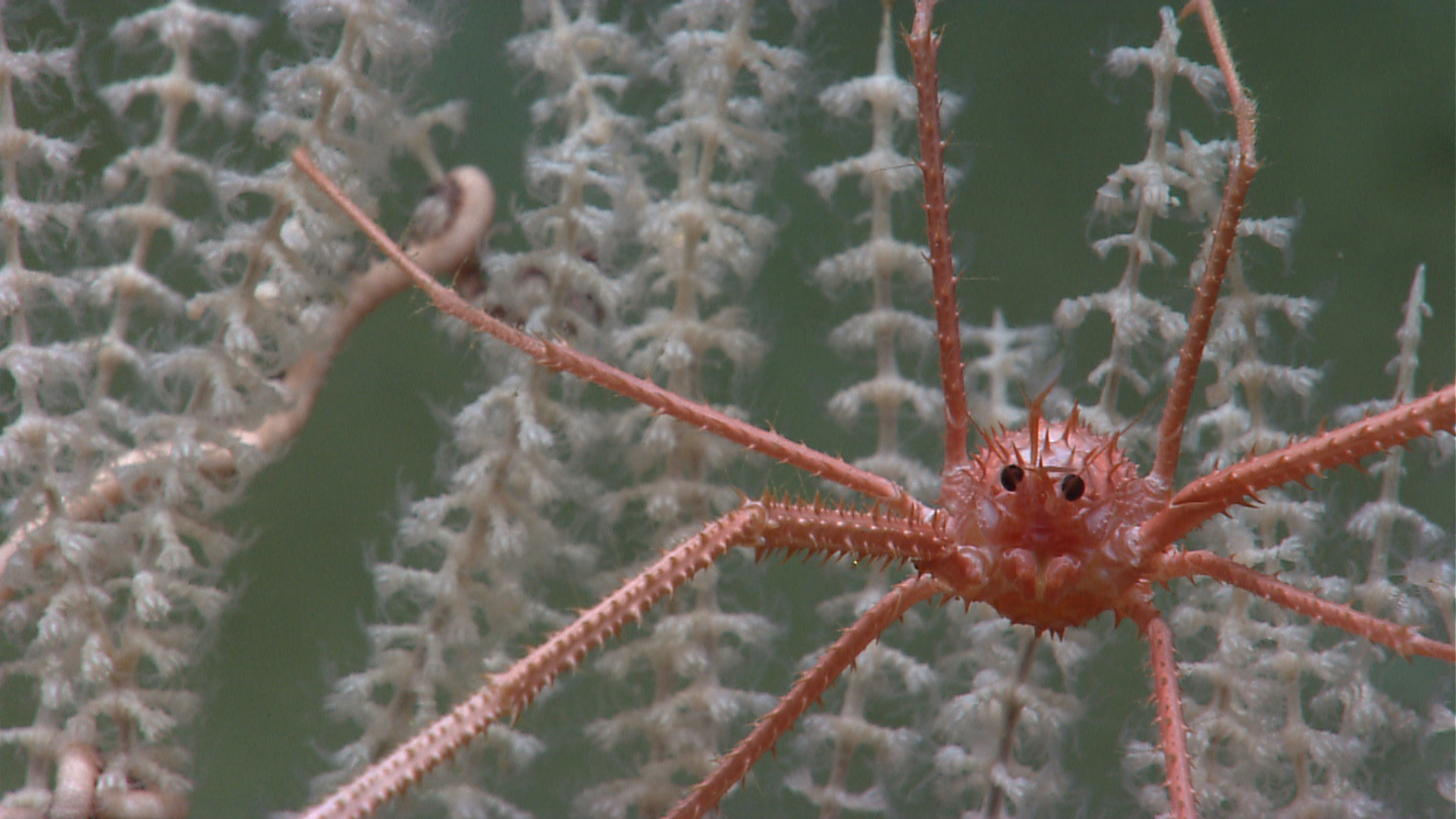 A squat lobster looking out from within a deep sea octocoral, 1,150m beneath the Gulf of Mexico. (Image: NOAA)

Tasked with what some say is an impossible mandate of promoting the development of deep seabed mining while ensuring the practice does not harm the marine environment, the ISA’s 168 members must agree on how these fragile and unique ecosystems will be protected, how the potentially multibillion dollar industry will be regulated, how any profits will be shared equitably, and how it can demonstrate accountability and transparency.

The clock is ticking. So far, the ISA has granted 29 exploration contracts of 15 years for three types of deposits across more than 1.3 million square kilometres of seabed in the Pacific, Indian and Atlantic oceans. Several of these contracts are due to expire in 2021, so the ISA has two key meetings in February and July in Kingston, Jamaica, to finalise the code and meet its deadline of 2020.

Those advising on the code say that for perhaps the first time in history, a governing body and its members have the chance to establish rules for an extractive industry before it begins. But civil society groups and scientists argue that the world’s ocean is already severely stressed from climate impacts and overfishing, and that regulations are being developed without a full understanding of the risks. 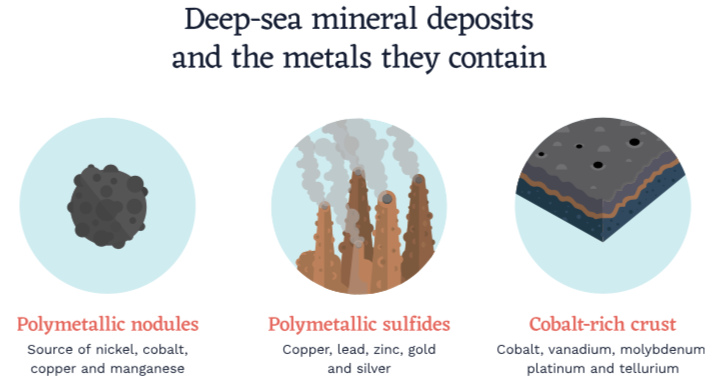 Polymetallic nodules, consisting mainly of manganese, are bumpy, usually potato-sized balls suspended in mud on the floors of the deep abyss. They’re found in an exploration zone of the eastern Pacific known as Clarion-Clipperton. This is the area of greatest commercial interest, estimated to hold more nickel, cobalt and manganese than all known terrestrial deposits combined. A recent MIT cost-benefit analysis found that mining these nodules would be profitable, with annual revenues of up to US$2.2 billion a year.

Polymetallic sulphides are formed through hydrothermal activity when hot water, discharged from the earth’s crust, hits the cold water and deposits a “heap” of minerals including iron, silver and gold. These vents look like smokestacks, and are mostly located on the top of steep, semi-active volcanoes deep in the Pacific and Atlantic.

Cobalt crusts are found on underwater mountains, mostly in the Pacific, at depths of 400 to 7,000 metres, and contain rare earths.

The 29 exploration contracts have been granted to a mix of private entities sponsored by national governments, including China, France, Germany, India, Japan, the Republic of Korea, the Russian Federation and the lnteroceanmetal Joint Organisation (a consortium of Bulgaria, Cuba, the Czech Republic, Poland, the Russian Federation and Slovakia), as well as small island states such as the Cook Islands, Kiribati, Nauru, Singapore and Tonga.

China, the world’s largest consumer and importer of minerals and metals, is a very influential party, with the most contracts, according to Conn Nugent, director of the Pew Charitable Trusts Seabed Mining Project, which is pressing for a “precautionary” mining code. “National prestige is at stake here. Xi [Jinping] has the ‘three deeps’ – deep space, deep earth, deep ocean. And that tells me that they are going to be throwing a lot of resources into this.”

Once the code is agreed, seabed mining would not necessarily start immediately. Under ISA draft rules, contractors will have to carry out an environmental impact assessment and demonstrate financial and technological capacity. The Belgian firm Global Sea Mineral Resources has said it is ready to start as early as 2023. Observers forecast anything from 2025-27, while others question whether the “geologists’ fantasy” will get off the ground at all.

Michael Lodge, the secretary-general of the ISA, says commercial deep seabed mining depends on three things: “Firstly, the regulations, which we expect to finalise in 2020. Second the technology developments, where we have seen an increase in investment in recent years. Thirdly, the commercial aspect – the market price of metals.”

While there have been a number of failed attempts to exploit these minerals, there are reasons why the latest phase of exploration could succeed. John Parianos, chief geologist of Nautilus Minerals, says it comes down to demand from a growing, resource-hungry population. “What we are facing today is a much bigger market thanks to more widespread industrialisation which is directly linked to a reduction in world poverty.”

Estimates vary, but if mineral demand were to increase at the predicted 1% annual rate, it would be about 60% higher by 2050. For specific commodities such as copper, there could be up to a 341% increase in demand. The ISA says that up to 15% of global demand for copper and nickel could be met from the deep seabed.

At the same time, land-based deposits of metals have become more difficult and less profitable to extract. Cobalt is mined almost exclusively in the Democratic Republic of Congo, one of the poorest, most violent and corrupt nations in the world. Advocates of deep sea mining argue that it could offer – in far richer concentrations than are found on land – a reliable, clean and ethical source of the raw materials that are critical to high-tech and renewable energy technologies.

However, a 2016 supply and demand review concluded that even under the most ambitious scenario – 100% renewable energy by 2050 – projected demand could be met by existing terrestrial mining, improved metals recycling, and more. “Deep sea mining promotes the belief that you can continue unparalleled growth, but in different ways,” says Andy Whitmore, of the Deep Sea Mining Campaign (DSMC), a coalition of NGOs and local people from the Pacific, Americas and Canada opposed to mining. 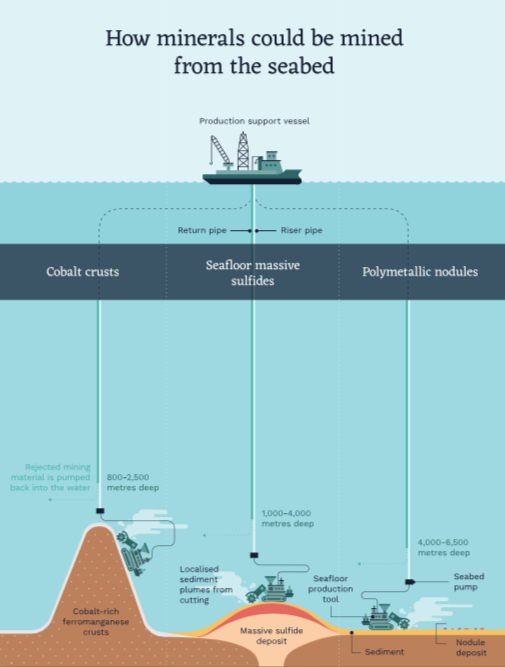 While the debate over demand continues to divide, the mining industry has made huge advances in the technology needed to extract and process these minerals in the harsh conditions of the high seas. In April, a Belgian firm will lower a world-first 25-tonne robotic tractor 4,500 metres to the Pacific seabed.

Based on existing designs, deposits will be pumped up to a surface ship through a tube several kilometres long. Nodules will be harvested by a giant caterpillar that will roll over the ocean floor, injecting water into the mud to disturb the deposits, sucking them out and ejecting the mud behind. The sulphides will require a huge robotic machine to roll over the seabed and use mechanical teeth to grind up the top few metres. These giant machines, which weigh nearly twice as much as a blue whale, will leave heavy, long-lasting footprints.

These processes will affect the seabed, the water column above it and surrounding areas. The scraping of the ocean floor to extract the nodules could destroy deep sea habitats of octopus, sponges and other species. Mining of the vents, which harbour massive animal communities at densities that make them one of the most productive ecosystems on earth, is likely to stir up sediment that could smother some animals.