Ready for the Next Gold Rush? 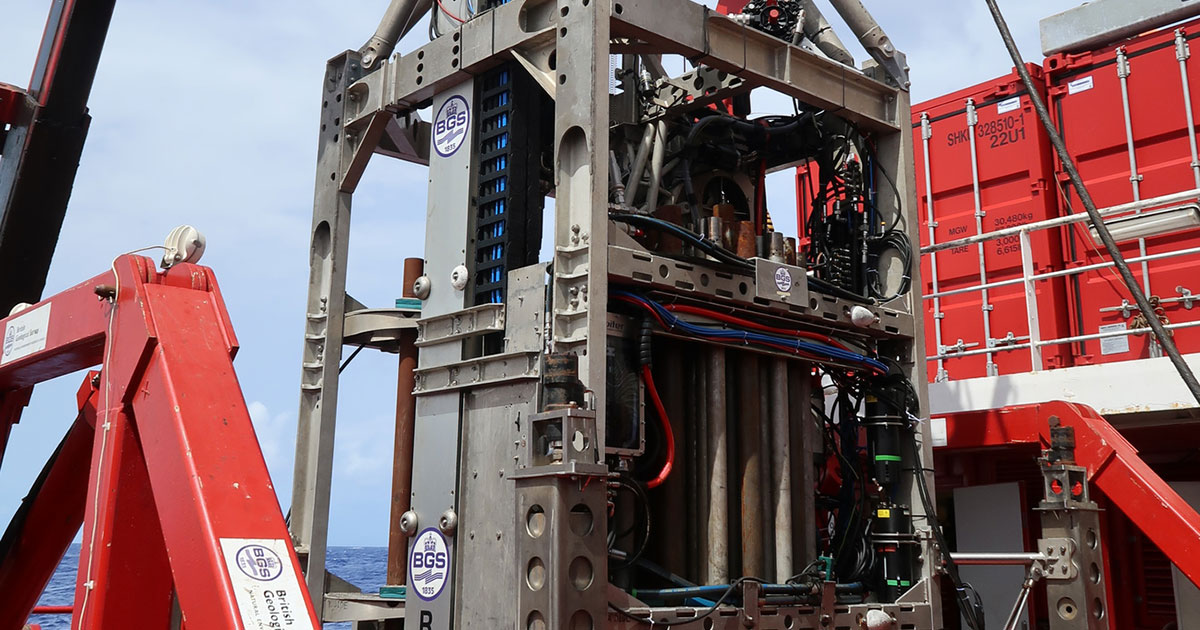 Named from the German word ‘goblin,' cobalt was once considered troublesome by medieval miners because of the toxic vapours released when smelted. It’s perhaps ironic to think that today cobalt - the goblin element – is favoured by modern society and plays a critical role in renewable energy, electric cars, and even cancer treatments.

Humankinds’ pursuit of cutting-edge technology will continue to grow into the foreseeable future, requiring considerable quantities of many raw materials. If we are to meet the demand, new unexploited sources of these scarce so called ‘E-tech’ elements will need to be discovered, and the UK is positioning itself as a world leader in this emerging sector.

MarineE-tech scientists undertook a holistic study of Tropic Seamount – an ancient volcanic island in the North East Atlantic, three kilometres high and covering twice the area of the UK’s Isle of Wight. The focus of the cruise was to discover the processes controlling the formation, composition, and distribution of cobalt-rich ferromanganese crusts. These crusts are found throughout the global oceans on the flanks and summits of submarine mountains, ridges, and plateaux, where seafloor currents have swept the ocean floor clear of sediment for millions of years.

During the six weeks at Tropic, the MarineE-tech team collected a vast amount of new data and completed one of the most thorough and detailed investigations of a single seamount ever undertaken.

The MarineE-tech research is supported by the Natural Environment Research Council, the UK's largest funder of environmental science.

Funded under their Security of Supply of Mineral Resources research programme, the project aims to tackle some of the current raw material supply challenges by improving our understanding of how certain metals are concentrated by the Earth's natural processes, and how they can be extracted and recovered in more environmentally sustainable ways.

MarineE-tech leads the way in exploration and assessment of cobalt-rich crusts on seamounts and so far, have found about one million tonnes of cobalt - eight times the amount produced globally. But as technology continues to develop around the world, it is quickly becoming clear that even this vast volume isn’t sufficient to meet product demand.

The Global Energy Metals website reports that planned battery production over the next two years will account for around 60 percent of total global cobalt demand in 2020 - up by 58 percent, driven mainly by electrification of vehicles and advancements in popular technology such as mobile phones and laptops.

"According to the UK's Driving Vehicle Licensing Authority, around 37 million cars are registered in the UK today. Just imagine the demand for cobalt if the UK Government were successful in replacing all hydrocarbon cars with electric ones by 2040 - and use batteries like in the new Tesla Model 3,” said Dr. Bramley Murton, Chief Scientist and Principal Investigator of the MarineE-tech project, National Oceanography Center, UK.

Leading the Way to Deep-Sea Metals

The UK and European economies are strongly dependent on imports of critical E-tech metals such as tellurium and cobalt from politically or economically unstable countries such as the Democratic Republic of Congo (DRC). This fact is recognized by the European Commission in the research priority given to the investigation of domestic and alternative mineral resources, including those on the seabed (European Commission, Horizons 2020).

With a well-developed offshore services sector and as a global leader in underwater robotics and autonomous systems, the UK is already exploring opportunities and looking to develop capacity in the deep-ocean metal mining industry. There is also high-level political support for the development of this sector, and estimates suggest it could be worth £40 billion to the UK economy over the next 30 years.

Paul Lusty, Team Leader and Senior Economic Geologist at the British Geological Survey (BGS), explains "When he was Prime Minister, David Cameron claimed seabed mining could be worth tens of billions of pounds to the UK economy in future decades. So, there is a huge opportunity for the UK, which with its well established deep-ocean research programmes, world-class universities and research centers working on relevant technologies, are well placed to take advantage of future developments in this sector.”

To fill the space in the UK's strategic research in marine minerals, MarineE-tech is the only scientific research programme in the UK with the aim of assessing the resource potential of seafloor mineral deposits rich in rare earth elements, tellurium, and cobalt.

Murton said, “Deep-sea mining is waiting for two things. The first is the proof of technology. For this Nautilus Minerals are leading the way but have cash flow problems with investors waiting to see how the copper price moves, and other investors waiting to see if the technology works as planned. The second is that the open ocean industry is waiting for the finalization of rules to allow mining from the International Seabed Authority.”

The company ‘UK-Seabed Resources Ltd.’ - a subsidiary of the US conglomerate, ‘Lockheed Martin Inc.’ - is directly involved with exploration for deep-ocean manganese nodules in the Clarion-Clipperton region of the north Pacific Ocean. Newcastle-based engineering company, Soil Machine Dynamics (SMD) Ltd, has been commissioned by Nautilus Minerals Inc. to build mining equipment - currently undergoing trials - for what will potentially be the world's first deep-ocean mining operation in the Pacific Ocean.

According to MarineE-tech, deep-ocean mining has rapidly moved from a distant possibility to a reality that can make a major contribution to global mineral supply and the UK economy.

By bringing together a consortium of research and industry partners, the project has the potential to catalyse the UK sector to become a global leader in marine minerals and the practice and policy issues around environmental protection during resource recovery worldwide.

In Search of the Ocean’s Hidden Treasures

Deep-ocean exploration is challenging and expensive due to its remoteness and depth. Many parts of the deep-ocean are very poorly explored. Lusty explains, “We have higher resolution maps of some other planets than parts of the Earth's seafloor. The great water depths in many parts of the ocean we are currently exploring for mineral resources mean very specialist equipment is necessary for surveying and sampling. These range from fairly crude sediment sampling devices which work under the influence of gravity through to very sophisticated underwater robots and autonomous submarines. The British Geological Survey has a unique capability in this area, and we used our drilling rig to drill mineral deposits in the middle of the Atlantic last year in water depths of about 3,500 meters."

During the MarineE-tech cruise, scientists deployed the NOC-developed autonomous underwater vehicle (AUV), Autosub6000, to map the height and shape of the subsea mountain as well as photograph and image the seafloor. A range of moored sensors measured water column properties at 4000 meters below the surface, and the NERC UK science-class remotely operated vehicle (ROV), Isis, took 400 samples of the mineral bearing rocks using both a newly developed drill system and hydraulic grab arms.

A range of new exploration tools for seafloor mineral deposits are under development. These can measure the physical properties of the seafloor to help identify the presence of mineralization and include sub-bottom acoustic imaging systems which transmit acoustic waves through the seabed to measure the thickness of the crusts.

Murton explains, “We have done the first comprehensive drilling of crusts, the first deep-sea plume experiments, and we are the first to make a thorough study of the environmental impacts of mining on a seamount. For me, as chief scientist, the MarineE-tech project is rewarding as it offers us the potential to start a new industry that can be environmentally sustainable from the outset, and that will help provide the world with essential and critical metals and elements for a low-carbon civilization.”

“The cobalt resource alone will help us electrify our transport, and the tellurium we have found could be used to make enough solar panels to power 60 percent of the UK's electricity demand, through carbon-free solar energy. Hence, I feel we can make a difference to society and humankind as a whole, releasing us from dependency on old fossil fuels and decreasing the negative impact on our planet.”

In October 2018, MarineE-tech will travel to the Rio Grande Rise to study crusts on the seamount off Brazil, enabling a north-south Atlantic comparison in crust formation processes.