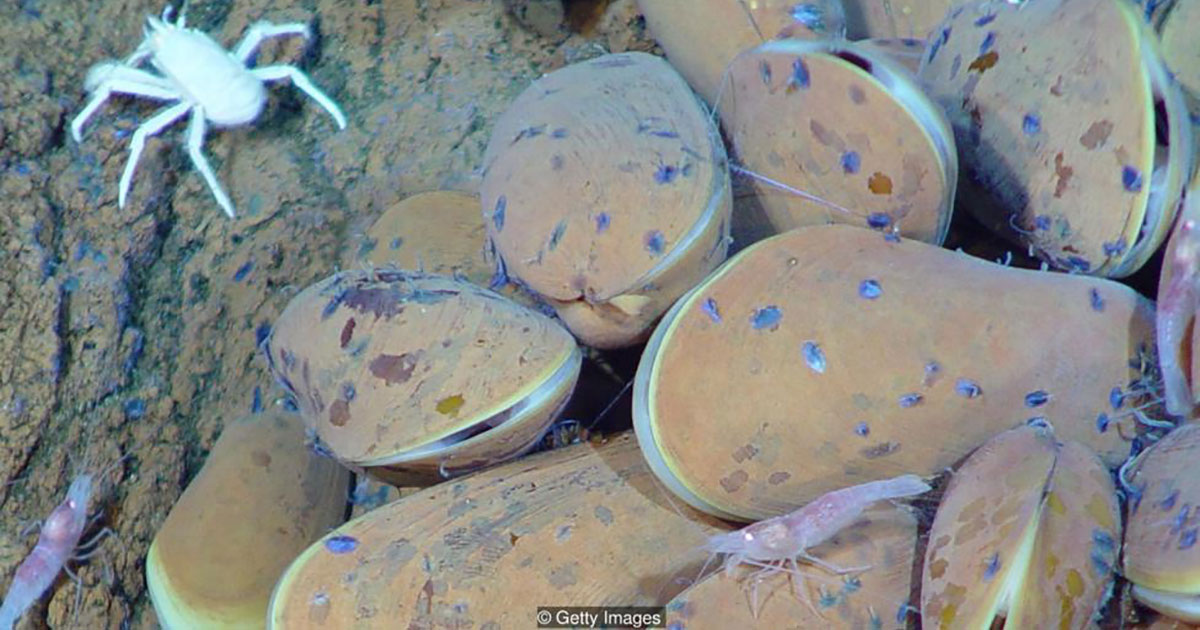 Off the coast of Okinawa, a slim stretch of land among Japan’s southern Ryuku islands, thousands of metres below the surface, there are the remains of extinct hydrothermal vent systems scattered about the ocean floor.

The minerals at these long-dead former vent sites are now gaining attention due to increasing international interest in deep-sea mining. Just one of these deposits is thought to contain enough zinc to supply Japan’s demand for a year. For a country that imports the vast majority of its mineral resources, seafloor sulphide deposits are seen as a tantalising potential domestic alternative. But there is a high price: disrupting these sites through mining could put unique and fragile ecosystems at risk.

Hydrothermal vents mark the point where scaldingly hot water used to surge up from chimney-like ssures in the seaoor crust, near the boundaries between tectonic plates

These mineral-rich deposits – known as seafloor massive sulphides – mark the point where scaldingly hot water used to surge up from chimney-like fissures in the seafloor crust near the boundaries between tectonic plates. They form when cold seawater seeps down through fractures in the crust, heating up and leaching minerals from the rocks as it passes. The heated water then rises back to the seafloor, exiting explosively to produce smoker chimneys.

Discovered only in 1977, the vents are home to extraordinarily diverse forms of life while they are active. Tube worms more than two metres high (6.6ft) with vivid red tips, deathly white crabs and fish, and countless species of microorganisms are uniquely adapted to the hot, dark conditions of life at the vents.

These vents don’t last forever. Over thousands of years, tectonic forces carry the vents further from the plate boundaries. The sites become less and less active, growing cold and silent.

Near these dormant sites, the mineral deposits – including copper, zinc, lead, gold and silver – remain at or close to the seafloor. An individual mound can contain millions of tonnes of metallic ore.

For Japan, these large deposits are seen as a potential resource for supplying the country’s demand for basic metals. The Japanese government initiated a research project to seek out these deposits in 2013. But despite their large size, finding the deposits can be difficult.

“There is no hot metallic discharge to detect with remote sensing exploration tools,” Paul Lusty, team leader of the ore deposits and commodities group at the British Geological Survey, wrote by email from a research ship investigating a site at the Rio Grande Rise off the coast of Brazil.

“As they age they are also likely to be altered and covered by sediment, resulting in eventual burial and no obvious expression on the seafloor.”

The conditions at the seafloor are also extremely harsh. The work can take place at depths of up to 3,000m (10,000ft) and the currents at the bottom of the ocean can be rough.

As well as the challenge of finding out where the deposits are, finding out how large they are is crucial. They can extend for tens to hundreds of metres below the seafloor. Determining their size helps to figure out how much they could offer in terms of mineral resources. 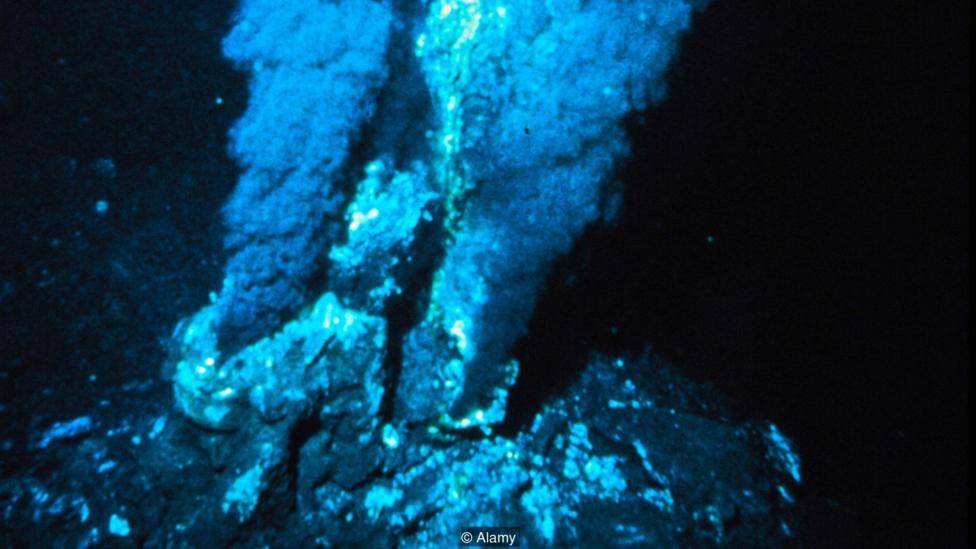 Each individual mound can contain millions of tonnes of metallic ore (Credit: Alamy)

Researchers are developing new techniques to answer these questions. Some of the most promising are acoustic methods, says Eiichi Asakawa, general manager of the research and development department at JGI, a geophysical surveying company based in Tokyo. They involve generating acoustic waves, which propagate underwater down to the seafloor. At the hard surface of the mineral deposit, the waves are partially reflected.

“We detect the very detailed, very weak reflected waves by hydrophone. We analyse the reflection data to get the subsurface images,” says Asakawa. “Our system is very new. It is maybe the only one of its kind in the world.”

JGI has used these methods to work with the Japan Agency for Marine-Earth Science and Technology in a project on next-generation technology for ocean resources exploration since 2014.

Other researchers have mainly been using electromagnetic methods to identify mineral deposits. The Japan Oil, Gas and Metals National Corporation used these techniques to find six large deposits that could be good candidates for mining. In 2017, one of these deposits was excavated in a pilot test, lifting up large quantities of ore up 1,600m (around 5,250 feet) from the seafloor to the surface for the first time. The next step would be to see whether this could work on a commercial scale.

But this kind of activity comes with substantial environmental risks. One of the main problems is that we have such poor knowledge of the environment and ecosystems at the sea floor, says Conn Nugent, director of the seabed mining project at the Pew Trust. Despite decades of research, most of the ocean floor has not been charted. Even less research has been carried out to understand the ecosystems the ocean floor supports.

“Most of the realms that are being considered for deep sea mining have been very little explored,” says Nugent. “So we proceed from a basis of ignorance.” 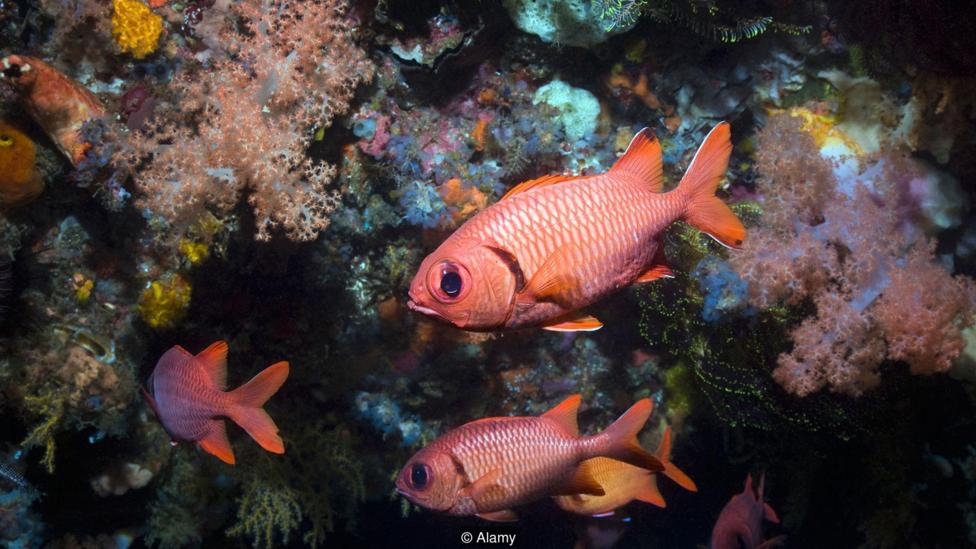 Without strong baseline knowledge of the life supported at the old vents, understanding the environmental consequences of mining seafloor massive sulphide deposits becomes almost impossible. Even if mining extinct vents doesn’t disrupt the ecosystems at nearby active vents, the mining sites themselves could be home to unique forms of life.

“Extinct deposits will still be inhabited by their own ecosystems, which could potentially be disturbed,” says Lusty. “There is a severe lack of adequate baseline studies on organisms and communities, and uncertainty over the mining methods that will be employed and the magnitude and duration of their impacts on deep-ocean ecosystems.”

For prospective projects in international waters the International Seabed Authority is in the process of drawing up environmental regulations on deep-sea mining. Nugent is advising on those regulations. Given our lack of knowledge of these potential mining sites, the best approach is precautionary, he says.

“The necessary response to that ignorance is to rope off significant amounts – and we mean 30-50% – of the total contract area as no-mining zones,” says Nugent.

When the ISA’s guidelines eventually come into effect, regulations such as these may apply in international waters, which make up most of the ocean. But beyond the high seas, within the exclusive economic zones of the oceans that surrounds coastal countries, nations would operate by their own rules.

The potential impact of deep-sea mining is wide-ranging, creating sediment plumes that stretch for hundreds of kilometres. The plumes are created by disturbing the seafloor, and they are thought to be among the most harmful aspects of deep-sea mining. The plumes may contain toxic materials, or it may simply smother bottom-dwelling life that it covers. The turbulent nature of the seafloor currents makes it hard to predict how the plumes will spread.

In addition to the plumes, if the mining activity were to go on round the clock, there would be other forms of disturbance to wildlife.

“We know that even just having the presence of boats at the surface will create [night-time] light for birds, and it will potentially increase shipping noise, which is an issue for some marine mammals and fish,” says Kirsten Thompson, an ecologist at the University of Exeter who has studied the potential impacts of deep-sea mining.

“There’s a whole host of things that we can predict may be associated with these kinds of mining activities, but at what scale we really don’t know. That’s the issue.”

But the environmental impacts in the deep sea may be offset by one very important benefit, says Lusty. They could be a more carbon- efficient source of metals than those found on land. The quality of copper ores from mines on land, for example, have fallen by 25% in 10 years. Poorer quality ore – essentially with less copper per kilogram of ore – means it takes more energy, and more carbon emissions, to extract the metal.

“These [seafloor] deposits are sometimes much richer in metals than comparable deposits we are currently mining on land,” says Lusty. “Therefore less ore should be required to produce the same amount of metals – and less mining and crushing and grinding means reduced energy consumption.” 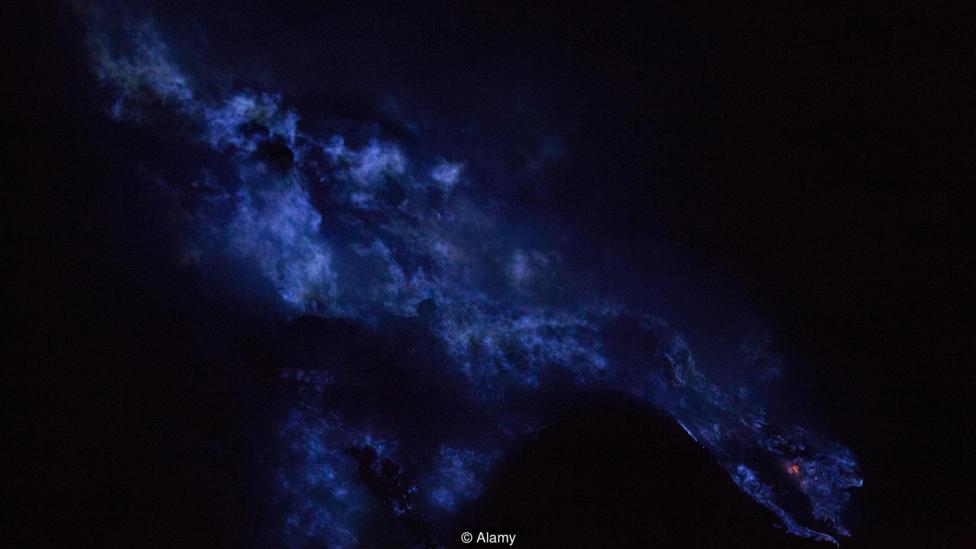 The exploration of hydrothermal vents presents many challenges - meaning these alien worlds are still a mystery to scientists (Credit: Alamy)

Metals such as copper are going to be in high demand to establish renewable energy infrastructure, such as solar and wind power. Some of the largest land-based copper mines are producing ore of about 0.7% copper, with seafloor massive sulphides often being several times more concentrated.

“Extracting deep-ocean metal resources will result in interference with the natural environment, but these metals appear vital to many the technologies that are integral to meeting global [UN] Sustainable Development Goals to end poverty, protect the planet and ensure prosperity for all,” says Lusty.

Finding a way between supplying the raw materials for renewable energy technologies and protecting the deep seas is “a difficult line to walk”, says Thompson. “We know we need to have a decarbonised future, but we also known we cannot sustain the use of these resources at the rate we are going at now.”

More of a focus on recycling the minerals and materials we already have in circulation could be the solution, Thompson argues.

“We can do it in a way that is more sustainable by looking at trying to increase our rates of recycling and really pushing for development of new types of technology that don’t require so much of these resources,” she says.

Japan’s latest energy strategy states that it does plan to further its investigations of mining seafloor massive sulphides. But whether it ends up happening on a commercial scale depends, among other things, on how accessible the deposits turn out to be and how much it costs to carry out. However, another part of the energy strategy is also a focus on reusing these minerals, and to “aggressively promote” the development of new recycling technologies.

Deposits around hydrothermal vents are just one of several sites of interest for deep-sea mining that may take off in the coming years. Other sources of minerals being explored are polymetallic nodules, typically found in the abyssal plains, and cobalt-rich ferromanganese crusts, found on seamounts throughout the oceans, and even metal-rich muds found beneath salt-rich waters, such as the Red Sea. In all cases, the tension has yet to be resolved between the minerals they contain that could be used in renewable technologies, and the environmental damage risked by accessing them.