Deep-Sea Mining Could Find Rare Elements for Smartphones — but Will it Destroy Rare Species? 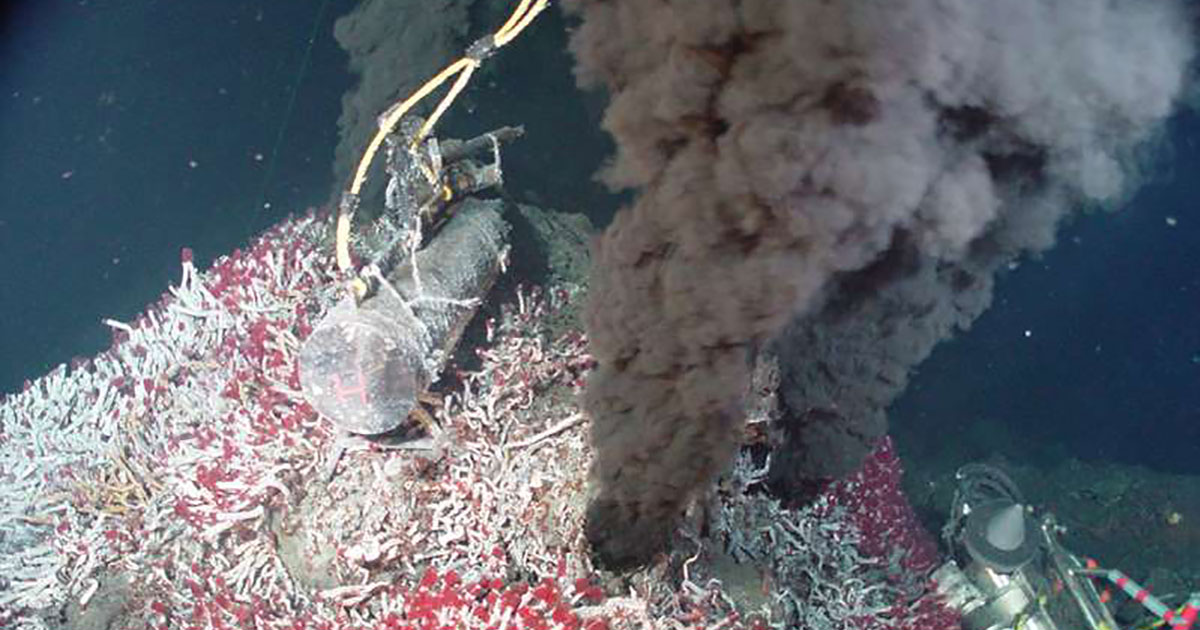 In September of 2017, The Japan Times reported that Japan had successfully mined zinc, gold, and other minerals from a deep-water seabed off the coast of Okinawa.

It turned heads in the mining industry, and though the operation was just an initial trial, it pointed the way toward what could become a massive deep-ocean mining industry. And that is sparking renewed concerns among scientists about how this new gold rush will affect the unique creatures living off these ore deposits.

The Okinawa deposits, located over 5,000 feet below the sea surface, are formed by underwater geysers called hydrothermal vents. These are chimneys on the seafloor that spew out hot plumes rife with zinc, nickel, copper, and other rare elements; when the plumes collide against the cold seawater, the metals fall out and accumulate on the seafloor. There are more than 500 hydrothermal vents all over the world, says deep-sea ecologist Andrew Thaler, and they represent some of the last untapped deposits of precious metals on Earth. 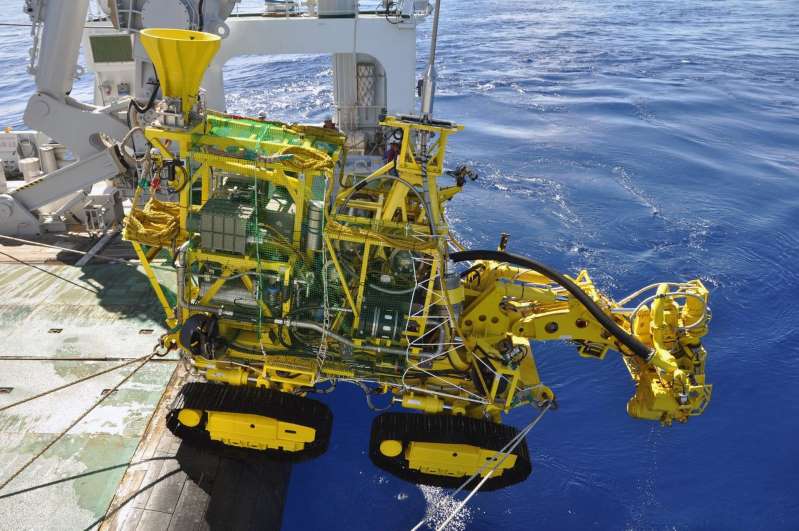 A mining machine is lowered into the water off the coast of Okinawa to extract minerals from a deep-water seabed. | Photo: Agency for Natural Resources and Energy / via Kyodo / The Japan Times

As such, countries and mineral extraction companies all over the world have been gearing up for years to tap into these underwater treasure troves, which hold many of the rare elements key to power our smartphones and computers. The deposit mined by Japan is believed to contain an amount of zinc equivalent to the country’s annual consumption, according to The Japan Times. (Japan consumed 470,121 metric tons of refined zinc in 2014, according to the US Geological Survey.) The ore also includes gold, copper, and lead.

“THIS BABY IS GONNA GO.”

“We’ve known that [deep-sea] mining is going to happen for a while now,” says Thaler. Japan’s month-long extraction — dubbed “the largest such extraction of its type” by The Japan Times — is likely still part of an effort to test underwater mining robots rather than a full-blown commercial operation, says Conn Nugent, the director of Pew’s seabed mining project. Still, it’s a step forward in making large-scale seabed mining a reality. “It does appear that a page has been turned and that this baby is gonna go,” Nugent tells The Verge.

Hydrothermal vents were discovered in the 1970s and have fascinated scientists ever since. Each vent system is unique, with different creatures inhabiting its slopes and feeding off the toxic hydrothermal fluids spewing out into the ocean. In the eastern Pacific Ocean, vents are populated by enormous worms that live inside tubes. Two types of snails live around the hydrothermal vents of the southwestern Pacific: one encased in a whitish shell covered with tiny hairs; the other enveloped in a heavy black shell that “almost looks like body armor,” Thaler says. In the Southern Ocean around Antarctica, vents are dominated by yeti crabs, so called because they’re completely white and covered in hair. “There’s so much weird wild stuff,” Thaler says. “It’s the closest thing we’ll ever get to actually interacting with alien life.” 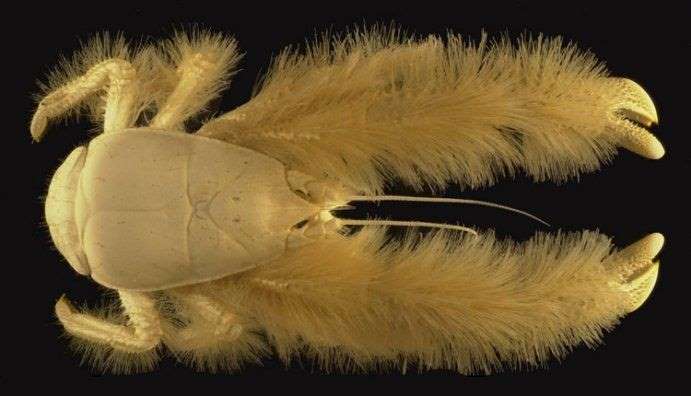 A yeti crab. | Photo by A. Fifis, Ifremer / ChEss, Census of Marine Life

But mining might put this life in peril. Mining the vents involves grinding metal-rich rock into a slurry and sucking it up to ships floating at the surface using gargantuan machines. “There’s no way around it: whatever you're mining, you’re wiping out all the animals that live there,” Thaler says.

Hydrothermal vents can be resilient to change: Thaler says he’s studied hydrothermal vent systems that were completely wiped out by a volcanic eruption, buried by lava, but began spewing out fluids again after about a decade. “These are ecosystems that can handle occasional catastrophic disruption,” he says.

Other vents, however, are more stable — these vents can slowly accumulate minerals over thousands of years. That makes them particularly valuable to mining operations, but it also means that the life there may be less adapted to disruption. So, it may be that the most fragile species are the ones at greatest risk.

All in all, it’s unclear what level of destruction hydrothermal vents can sustain before they no longer support life — or whether they can recover. Because hydrothermal vents are relatively recent discoveries, scientists don’t have the answers to all these questions. “It could be that [mining] is not a big problem, but until we get those measurements we’re not gonna know,” says Cindy Lee Van Dover, a professor at the Division of Marine Science and Conservation at Duke University.

Hydrothermal vents also contain toxic chemicals like lead and arsenic — and it’s unclear what would happen if mining equipment failed, leading to a spill. Will animals on the seafloor or water column be harmed? What if there’s a spill in waters close to the shore, where people live? Answering those questions falls to the International Seabed Authority (ISA), the United Nations’ independent treaty organization that is tasked with regulating seafloor mining in international waters.

“THESE ARE ECOSYSTEMS THAT CAN HANDLE OCCASIONAL CATASTROPHIC DISRUPTION.”

The ISA has granted numerous contracts to countries — including Japan — to explore for minerals. But no large-scale commercial mining operations are taking place just yet, says Nugent. That’s because the ISA is still figuring out how to make sure deep-sea mining is done safely. The agency has committed to develop environmental regulations by 2020 — which means that we can expect big underwater robots mining hydrothermal vents commercially around 2025, Nugent says.

For now, Japan is mining vents in its own coastal waters, called an exclusive economic zone (EEZ). The country’s Economy, Trade and Industry Ministry then plans to commercialize mining at the sites off Okinawa around the middle of 2020, according to The Japan Times. That would fit with the timeline given by Nugent. “If any ISA member state were to conduct large-scale commercial seabed mining within its own EEZ without waiting for the production of the ISA environmental code, that would have diplomatic repercussions,” he says. “And I’m not sure that any member state would want to run that risk.”

“THE DEEP SEA IS OUR OUTER SPACE.”

Regardless of what Japan’s doing in its own waters, hydrothermal vents — and other underwater mineral deposits — in the high seas may well be opened to mining soon. And the scientific community will be weighing in to determine how to do it best. At stake is one of the most unique ecosystems on our planet. Globally, active vents are estimated to cover about 34 square miles, less than 1 percent of the area of Yellowstone National Park, Lee Van Dover says — they’re very rare. But also very understudied. Deep-sea animals have yielded big discoveries before, including one small organism that contains a compound that could help treat Alzheimer’s. Maybe hydrothermal vents host communities of organisms that may yield the next big drug. And, Thaler says, we should protect them for their own right: these weird, deep-sea creatures exist in pure darkness amidst toxic chemicals that’d be fatal to most animals.

“The deep sea is our outer space,” Thaler says, “but it’s an outer space that’s just full of living things that totally challenge our perception of what it means to be alive.”