TMC and Allseas Achieve Historic Milestone: Nodules Collected from the Seafloor and Lifted to the Production Vessel Using 4 km Riser During Pilot Trials in the Clarion Clipperton Zone for First Time Since the 1970s 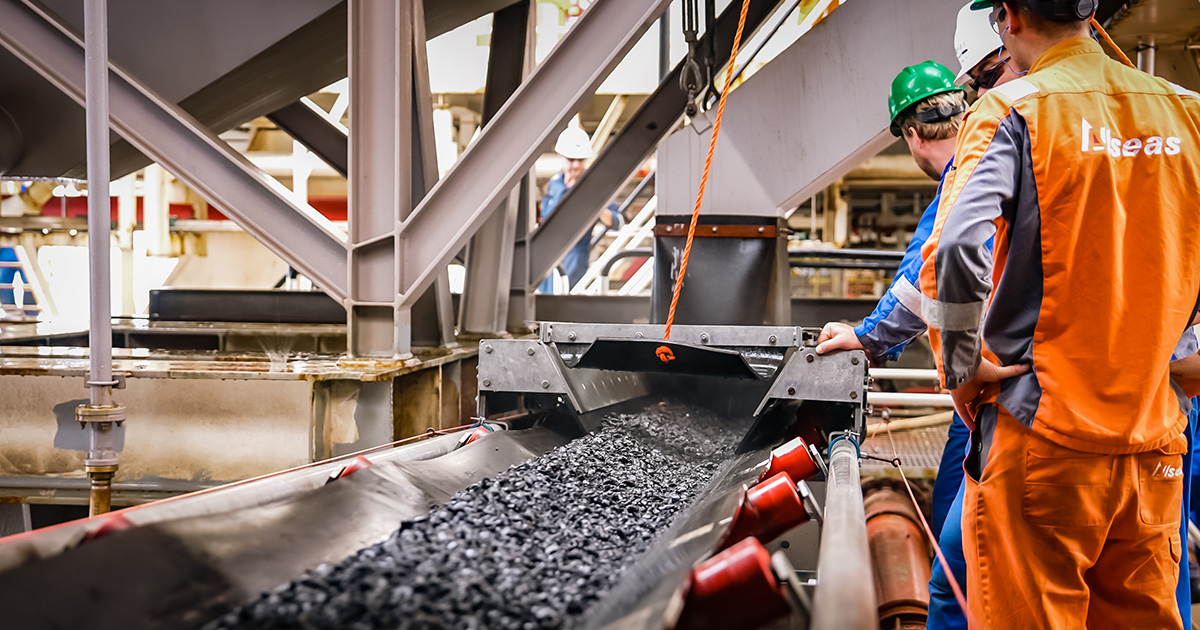 Allseas engineers inspect the first batch of polymetallic nodules collected from the seafloor as they travel on a conveyor aboard the Hidden Gem.

TMC the metals company Inc. (Nasdaq: TMC) (“TMC” or the “Company”), an explorer of the world’s largest estimated undeveloped source of critical battery metals, announced that it has successfully collected an initial batch of seafloor polymetallic nodules, and transported them up a 4km-long riser system to the surface, in what represents the first integrated system test conducted in the Clarion Clipperton Zone of the Pacific Ocean since the 1970s.

Having successfully completed at-sea construction of the riser system and its integration with the flexible jumper hose and pilot nodule collector vehicle, the dedicated team of 130 crew and engineers aboard the Hidden Gem commenced initial nodule collection runs, driving the pilot collector 147 meters in one hour on a pre-determined path and collecting 14 tonnes of nodules. From inside the collector nodules were channeled to the jumper hose and into the riser where they were lifted on compressed air in a 12-minute-trip from seafloor to the Hidden Gem, where the return water was discharged to the midwater column at depth. To date on the current campaign the collector vehicle has successfully been test-driven approximately 18.1km within NORI-D. 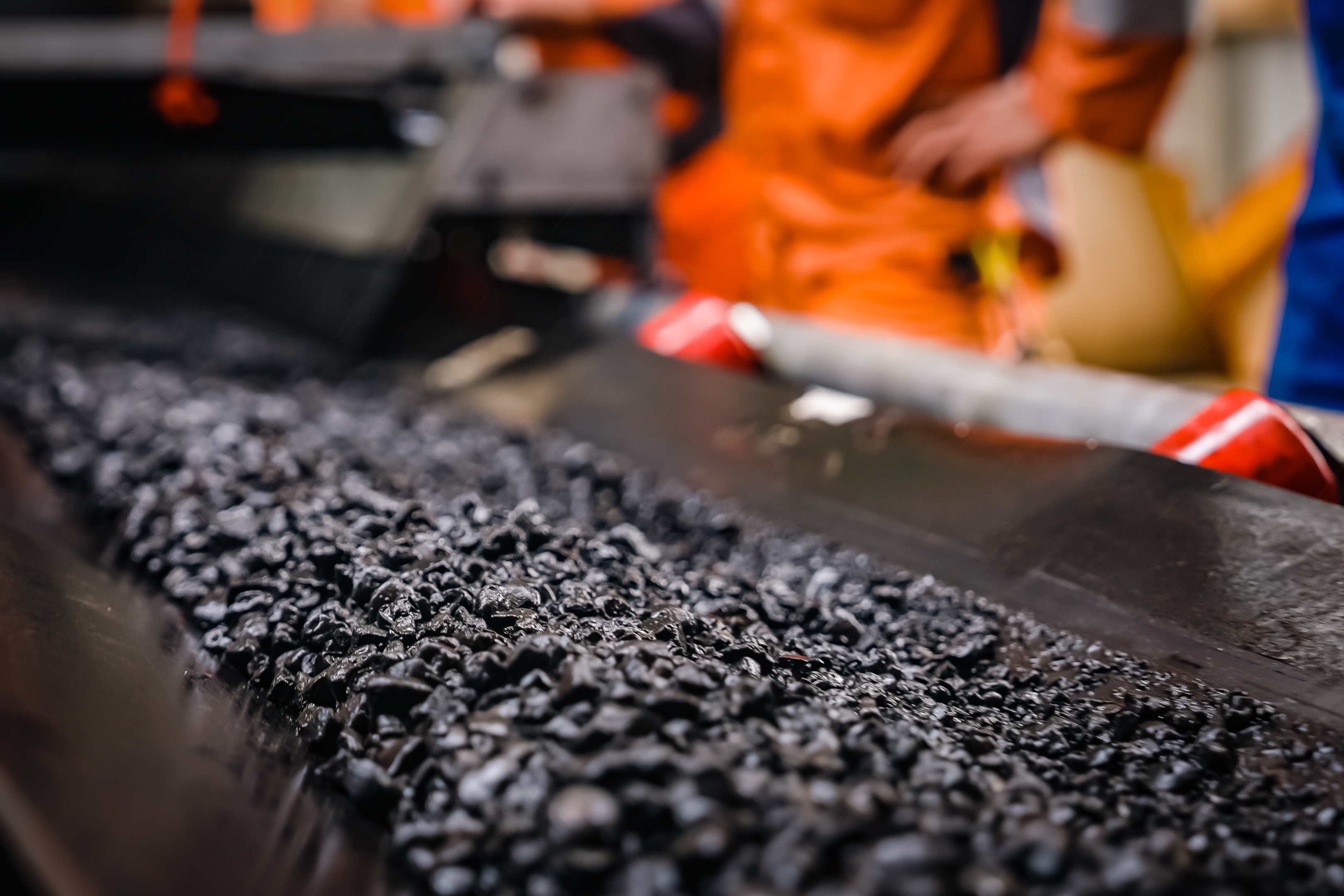 Following their 12-minute trip from the seafloor to the Hidden Gem, nodules will be dewatered and sent along a conveyor to the vessel’s hold for storage

Meanwhile, aboard a dedicated 103-meter-long monitoring vessel, expert industry contractors and independent scientists from leading research institutions from around the world are conducting a complex monitoring program to assess the environmental impacts of the collector system trials using an array of over 50 subsea sensors and monitoring stations. The assets are designed to record any changes in the marine environment that may occur during testing of the collector system. The state-of the-art technology that TMC subsidiary NORI has applied to this monitoring effort includes over 20 strategically positioned sediment collection stations; acoustic moorings and landers to measure sound propagation; two Autonomous Underwater Vehicles (AUVs) conducting underwater mapping; two Remotely Operated Vehicles (ROVs) collecting water samples in the plume; optical backscatter and laser diffraction sensors to measure sediment particle settling velocity; trace metal samplers; seven fixed landers equipped with Acoustic Doppler Current Profilers (ADCPs) and conductivity, temperature, and depth (CTD) sensors. NORI expects the findings from the data being collected will be published in scientific literature next year. 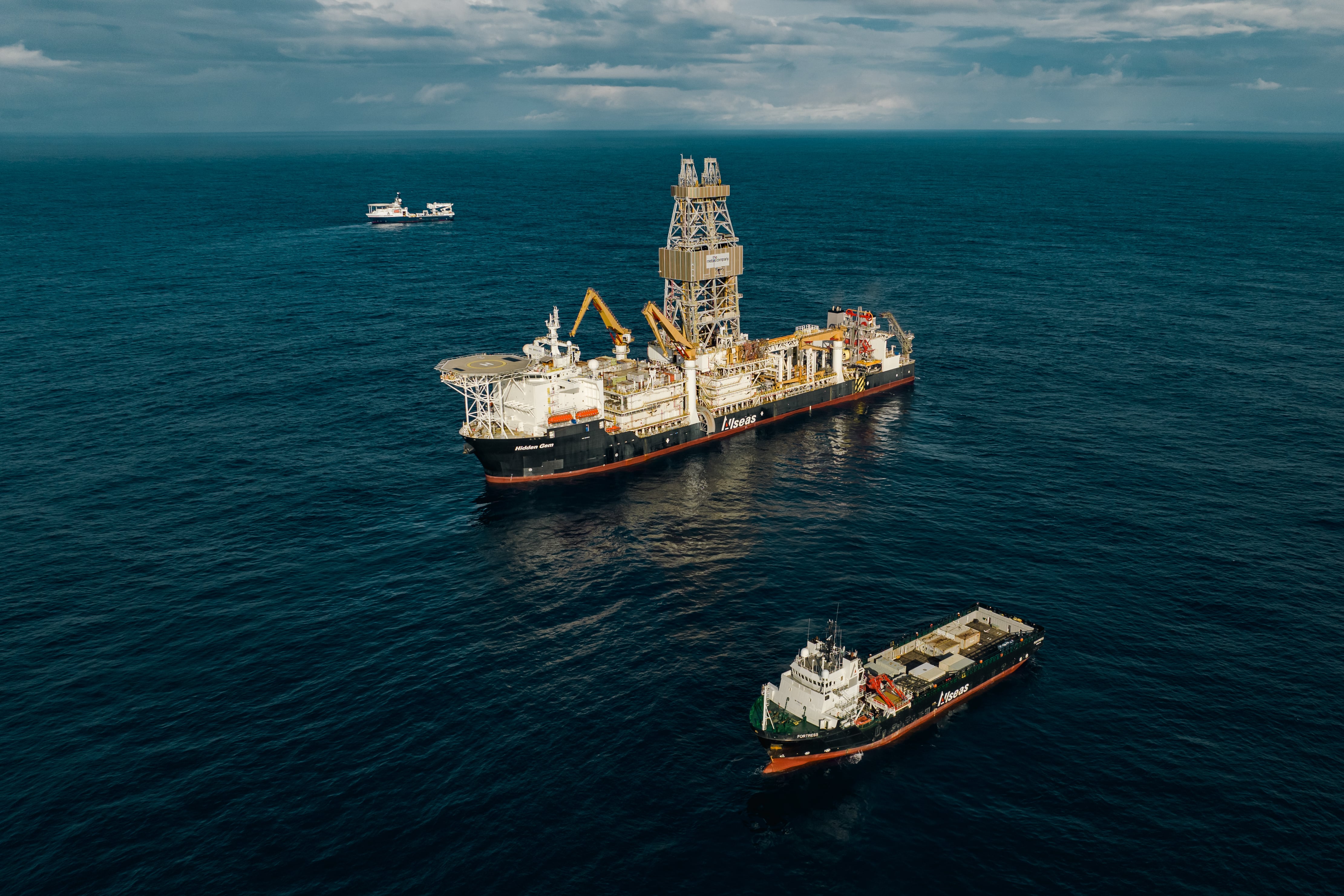 The pilot nodule collection system trials and environmental monitoring program together represent the most complex offshore campaign the Company has ever undertaken, requiring the coordination of 250 people across three vessels.

Gerard Barron, CEO & Chairman of The Metals Company said: “With the first nodules making their way from seafloor to surface using an integrated pilot collection system, we find ourselves at a historic moment in the development of this industry. Once again, our strategic partner Allseas have shown why they’re the best in the business when it comes to pioneering offshore engineering and operations. This is just the beginning, and we look forward to sharing more news as the trials and impact monitoring continue this quarter.” 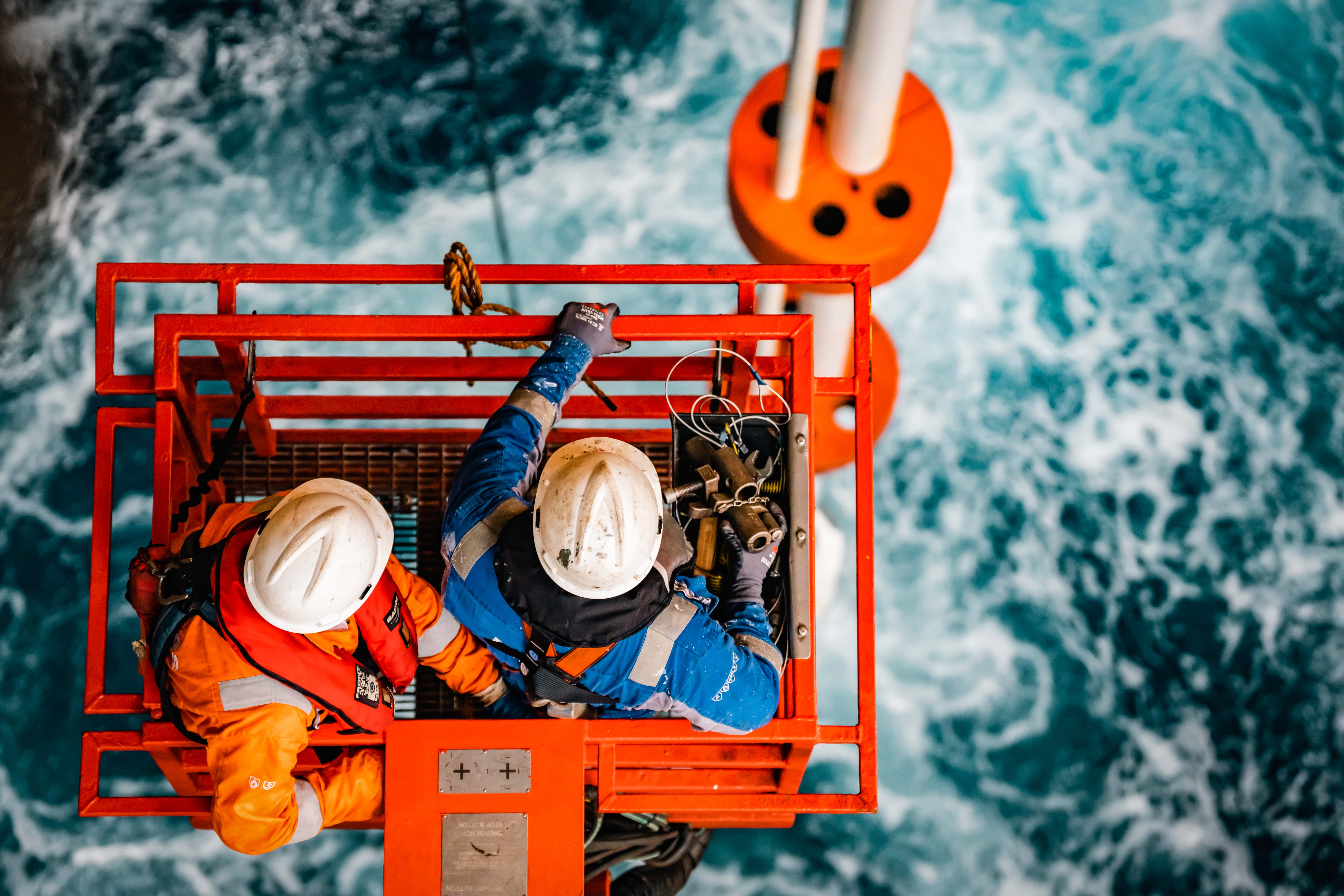 Allseas engineers inspect the above surface portion of the 4km-long riser system that is being used to uplift nodules from seafloor to surface.

Upon completion of the trials, which require the coordination of 250 people across three vessels, the research teams will undertake post-collection surveys to compare the status of the environment before and after the test. The data collected, together with many terabytes of existing baseline data collected by NORI throughout 16 offshore campaigns, will form the basis of NORI’s application to the International Seabed Authority for an exploitation contract, which the Company expects to submit in the second half of 2023. 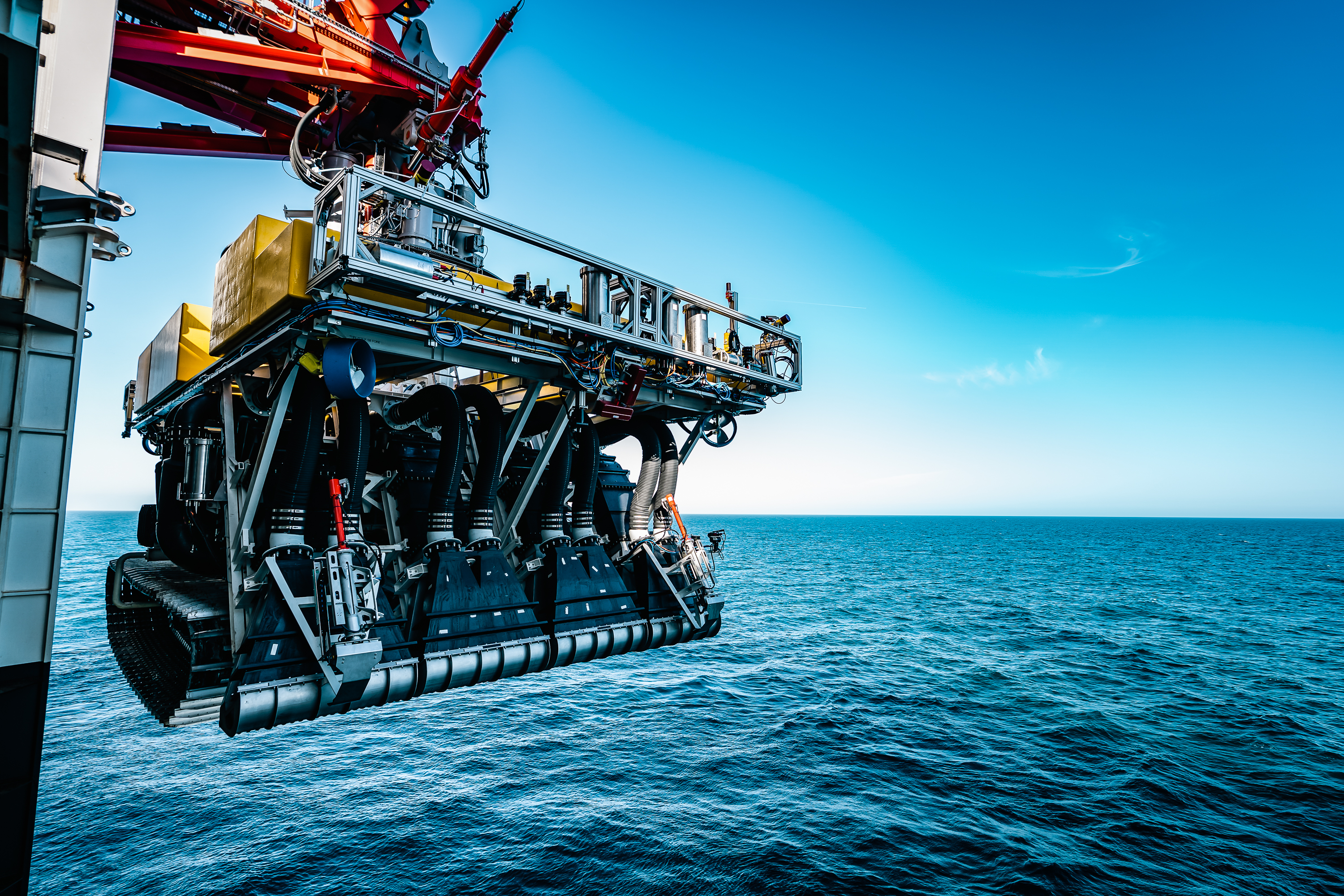 The Allseas-designed pilot nodule collector awaits deployment from the Launch and Recovery System (LARS) installed aboard the Hidden Gem.

In September 2022, NORI announced that it received the ISA’s recommendation to commence its pilot nodule collection system trials in the CCZ after its review of the Collector Test Environmental Impact Statement (EIS) and Collector Test Environmental Monitoring and Management Plan (EMMP). While several ISA contractors including BGR and GSR have successfully conducted trials of prototype nodule collectors in recent years, NORI’s tests will mark the first time an integrated nodule collection system — including nodule riser — has been tested in the Clarion Clipperton Zone since the 1970s, when oil, gas, mining and industrial majors including Shell, BP, Rio Tinto (Kennecott), US Steel, INCO (Vale) and Sumitomo successfully conducted pilot test work, collecting over 1,500 tons of nodules.

In May 2022, TMC and Allseas announced successful trials of the nodule collector vehicle in deep-water in the Atlantic as well as harbor wet-test commissioning and shallow-water drive tests in the North Sea.

A video accompanying this announcement is available at
https://www.globenewswire.com/NewsRoom/AttachmentNg/453aa06e-2539-4e43-a8f9-36c837e78cd0