The Race for Ocean Floor Dominance

A polymetallic nodule rests upon a map of the Clarion-Clipperton Fracture Zone. Image courtesy of DSM Observer.

How competition for rare resources could lead to armed conflict in the planet’s final frontier.

According to an article published by The Australian Broadcasting Corporation, the next frontier for warfare could be the ocean floor. While this has been a blind spot for military strategists in the past, author Alan Weeden says that just like wars have been fought over resources like oil, water, or food, the prize of valuable, unexploited minerals could lead to serious conflicts deep beneath the sea.

He writes, “. . . in the coming decades, conflicts over resources may increasingly take place under water, given the ocean floor's potential for both resource mining and military surveillance.”

Noting the widespread demand for compounds on our ocean floor that contain rare elements, Weeden adds that, “The world's reliance on China as a source for rare earth elements came into the spotlight this year during US-China trade war tensions, after Beijing threatened to restrict its rare earth exports in May.”

Weeden spoke with Neville Exon, a professor in geoscience and sedimentology at the Australian National University, who said that high-grade polymetallic nodules “. . . lie like potatoes on the seabed in soft sediments, and they're quite dense in some places,”

However, Professor Exon adds, “One of these potato-sized nodules can maybe take 30 million years to form, so if you mine an area, the deposit isn't coming back.”

“For deep sea miners seeking a more long-term source of rare earth elements, there are two other options,” writes Weeden.

“One is relatively easy: fissures on the seafloor, known as hydrothermal vents, can spew out mineral-rich deposits which end up landing on the seabed nearby, meaning a mining company would just need to design the right tools to pick them up.  The other is more complex: similar deposits also exist in the crusts of underwater volcanic mountains, which miners could essentially scrape off. However, the terrain would be steep, and Professor Exon said these crusts can be up to a meter thick. 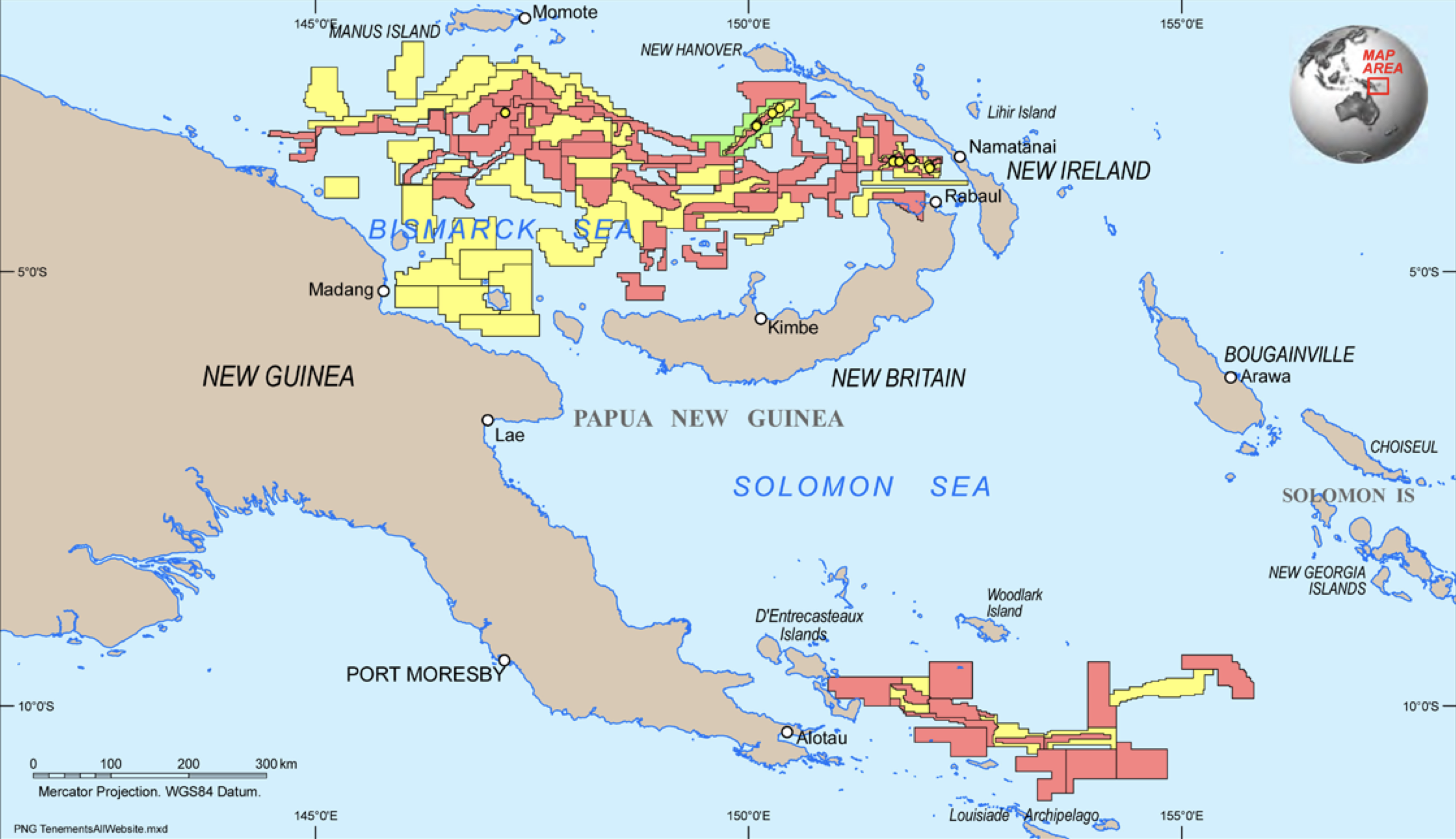 Map of Nautilus Tenements within the Manus Basin. Manus Basin mineral deposits form quickly, something deep-sea mining company Nautilus found out first-hand when they recovered a lost piece of equipment in the basin and discovered that it was covered in a thick crust of valuable minerals. Image credit: Nautilus Inc.

“So far, there are two commercially viable locations for mining nodules with rare earth elements, according to Professor Exon.

“One is found off India's southern coast, and the other is in the north-eastern Pacific at depths of up to 5,000 meters, known as the Clarion Clipperton Zone. Deep Sea Mining Watch — an online interactive map of deep sea mining research projects conducted over the past few years — shows a cluster of mining vessels in the region. They belong to a number of deep-sea mining exploration projects launched by Asian, European and Pacific states including China, Russia and France.

“But Professor Exon explained it was the Manus Basin — a marine region in the Bismarck Sea between the Papua New Guinean islands of New Britain and New Ireland — which may prove to be commercial deep-sea mining's greatest hope.

“He said the Manus Basin formed mineral-rich deposits incredibly quickly, something Canadian deep-sea mining company Nautilus found out first-hand when they lost a piece of equipment in the basin.

"They found it about three years later with a thick crust with a high level of gold in it — it only formed in a couple of years," Professor Exon said.

“Compared to the potato-like, high-grade manganese nodules, he said this kind of deep-sea mineral deposit could be seen as renewable, in a way.

“Manabrata Guha, a researcher in war theory at UNSW Canberra, told the ABC any country's deep-sea mining exploration projects could potentially be converted to military applications.

This could theoretically happen if a company's exploration documentation, like topographic or thermal maps of the seabed, was given over to aid a military.

“Currently, militaries of all stripes are vulnerable on the ocean floor, simply because humanity doesn't have much detailed knowledge about it in the first place. Just 9 per cent of the ocean floor is mapped in high resolution, compared to about 99 per cent of the surface of Mars — a blind spot that affects both deep sea miners and military planners.

“This came to a head most famously in 2005, when a US submarine crashed into an undersea mountain sitting about 160 meters below sea level. This is all worth keeping in mind, because while the Pacific Ocean is set to be the sea with the most mining potential, it is also home to this century's most consequential geopolitical tension: the rise of China, and the US's response to it.

“Currently, China has five deep sea mining exploration leases — the most out of any country. They're administered by the UN's International Seabed Authority, but the rules defining how this exploration is conducted are adhered to on a voluntary basis.

How could the seafloor be used for war? Weeden explains:

“Leszek Buszynski, a professor at the Australian National University's Strategic and Defence Studies Centre, said tensions between China and the US were already playing out in the western Pacific, regarding China's territorial claims in the South China Sea. That body of water is rich in resources, and is home to competing territorial claims from various South-East Asian countries.

“China claims almost all of the South China Sea, and has converted a number of low-lying reefs into military installations.

“First voiced by US Navy Admiral Samuel J Locklear III, this analogy visualizes an adversary's military defenses as a block of Swiss cheese, where each hole is seen as a potential vulnerability, which the US could exploit. Dr Guha told the ABC this concept could be expanded beyond its battle-centric focus to also include attacks on civilian infrastructure, finance and cultural systems.

“One example Dr Guha cited, specific to the military domain, was the potential for the US to deploy seabed sensors in the Malacca Strait — a shipping route between Malaysia and Indonesia vital to international trade — in order to track Chinese naval movements.

“In turn, the Chinese could do the same to Western-allied vessels in the South China Sea.

Dr Guha added that any military with a superior knowledge of the seabed could weaponize their information, by intentionally releasing false maps or thermal readings, with the aim of sabotaging an adversary's deep-sea strategy.

"The undersea domain provides another vector, another potential 'hole' that the Americans would look to penetrate," he said, adding that the US's underwater technology was 20 to 30 years ahead of China's.

"You want to pick and choose where you hurt the adversary to such an extent that their whole system collapses. That’s the idea of multi-domain warfare … the idea is to bring about systemic collapse."

Editor’s note: Some Australian usages in this article have been edited to reflect Americanized English, e.g. defense vs. defence.