The Future of Ocean Mining 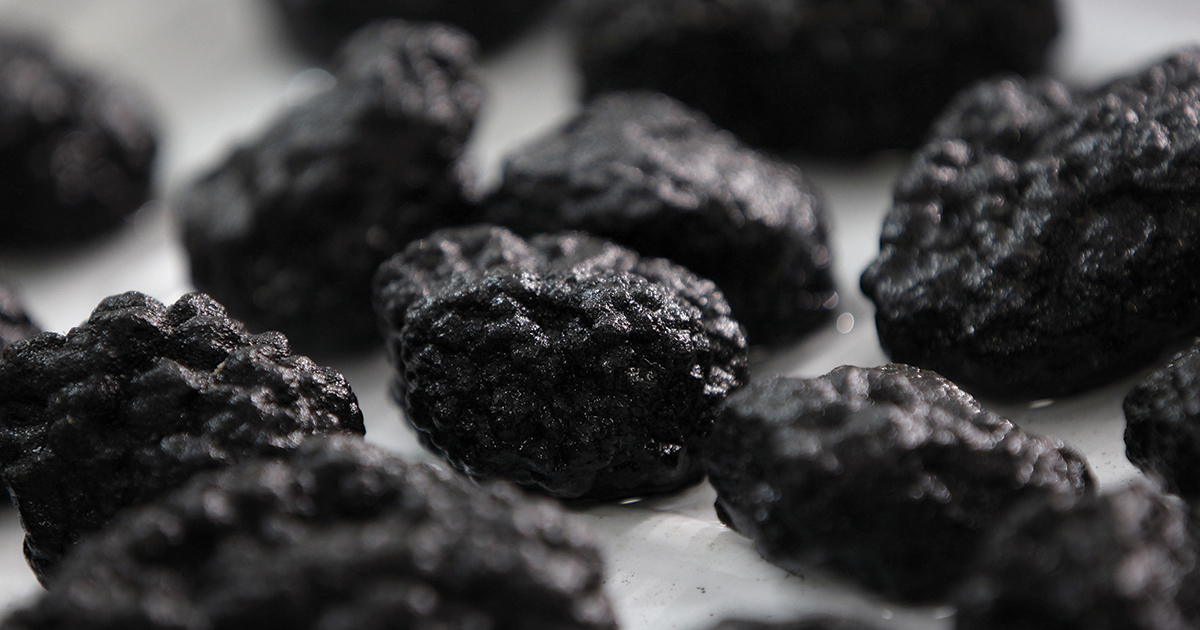 Much has been written in recent years about the commercial prospects of the ocean mining industry and, in particular, the harvesting of polymetallic nodules from the seabed in the Pacific Ocean’s Clarion Clipperton Zone (CCZ). 2020 was billed as a pivotal year during which stakeholders might see the first iteration of the Mining Code, essentially a ratified body of rules, regulations and procedures designed to oversee the prospecting, exploration and exploitation of marine minerals in the “Area”, international waters beyond national jurisdiction.

But progress, as with so many industries, was hampered by the COVID-19 pandemic. Notably, a number of critical sessions at the International Seabed Authority (ISA), headquartered in Jamaica, were postponed, and while the ISA plans to meet virtually in December, momentum appears to have been lost.

However, the seabed mining community is no stranger to set-back and delay, so stakeholders remain optimistic that 2021 will be more productive in terms of establishing meaningful steps toward commercial operations, even amid mounting calls for a deep-sea mining moratorium from civil society and a variety of NGOs. 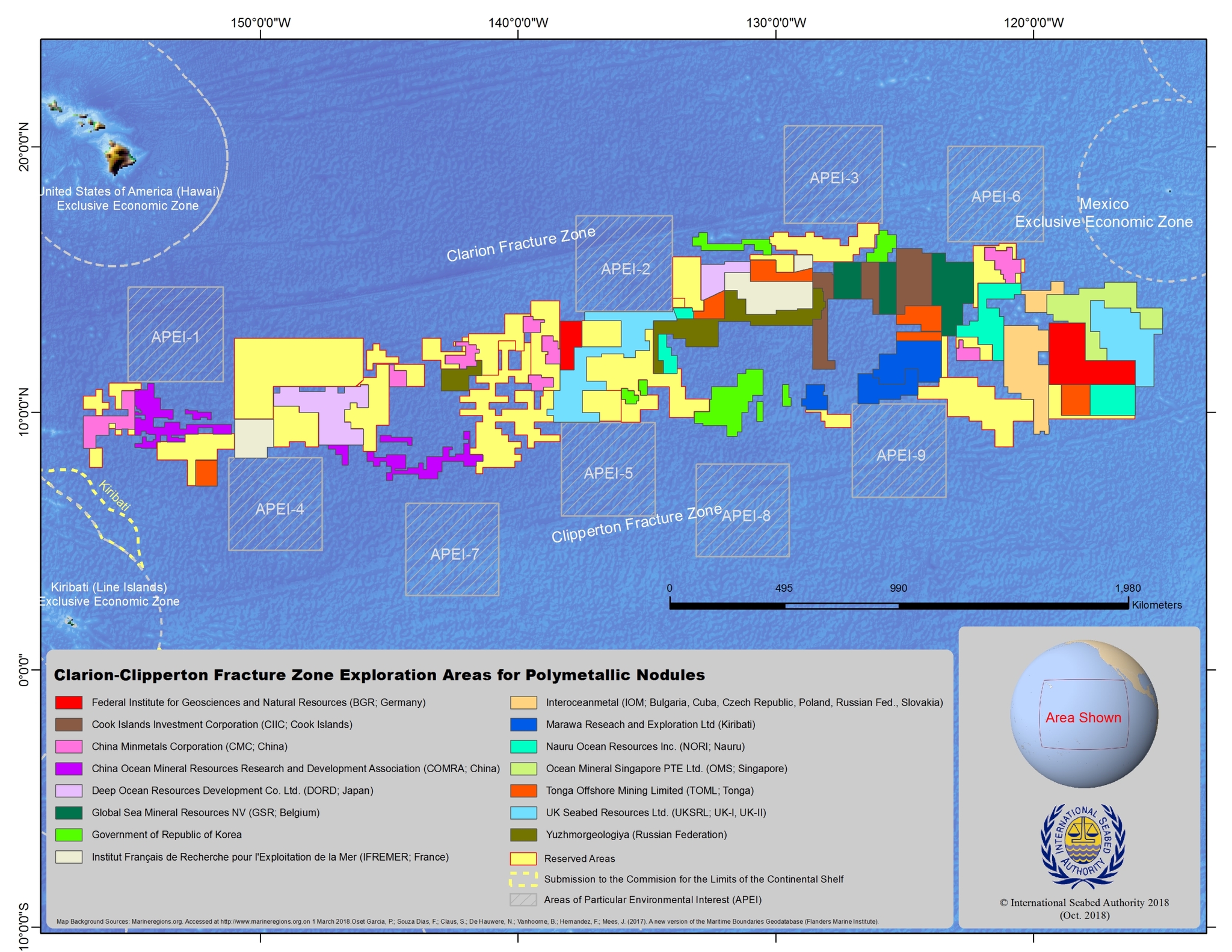 The CCZ, an abyssal plain spanning 5,000 km across the central Pacific, boasts average nodule accumulations of 15 – 20 kgs per square meter, at depths of up to 5,500 meters. (Image credit: ISA)

All of this uncertainty makes foretelling the likely future challenging. After all, deep-sea mining is anything but a fleeting concern; we have been trying to establish a realistic route to exploitation since the 1970s. If lessons from the past are anything to go by though, a more orchestrated and collaborative approach may prove lucrative in the short term, for both mining operators and license holders alike. Historically, the industry has always been somewhat reserved, but there are key, long-term advantages to pooling resources. None more significant than the immediate opportunity to curb operating costs. And the costs are substantial. To mimic the CCZ pilot tests we ran at Ocean Management Inc. (OMI) in 1978, would easily cost north of $100 million today. And the risks are equally hefty, too. We encountered some very costly, unforeseen problems; in fact, on our third mission we experienced a major system failure on deployment of our nodule collector, which led to a loss of the Cutter Blade Scraper (CBS) collector, the collector instrumentation system, and the collector umbilical cable resulting in the early termination of the OMI PMT program.

Taking a more collaborative approach to mitigating risks, therefore, may seem prudent given the stakes. Further, beyond financial capital, it would allow collaborators to group certain specialisms and subject matter expertise. In other words, intellectual capital becomes the currency by which the market can prosper, collectively. This would present a marked shift in mindset given that operators have tended to be guarded in the past, especially when it comes to collector technologies. But greater transparency here could usher in fresh impetus. After all, beyond the collector, the rest of the required equipment—air lifts, pumps, vessels, on deck sorters and storage systems—are borrowed straight out of the oil and gas toolkit.

In the short- to mid-term future, regardless of whether exploitation licenses are granted in the next few years or not, we will see ongoing scrutiny about the environmental impacts of seabed disturbances and sediment plumes. The industry needs to find a way to address these concerns and not get hamstrung in polemic debate. Ironically, the ISA, mining operators, and even the NGOs calling for a moratorium all want the same thing: a prudent, step-by-step approach supported by robust science. This point is often lost in slanted reporting.

As encouraging as this shared will is, though, we do actually have to run fully operational in-situ tests to garner irrefutable scientific evidence. Then we need to consider these findings within a broader evidence-based context. For example, how should we evaluate the impacts of land-based mining against seabed resource extraction, when we know that land-based activities are chasing diminishing returns and depleted mining grades, while abundant resources sit atop the seafloor? We know how to harvest nodules—we just need to marshal that know-how responsibly. That has proven to be easier said than done, so, again, collaboration will continue to be the key. 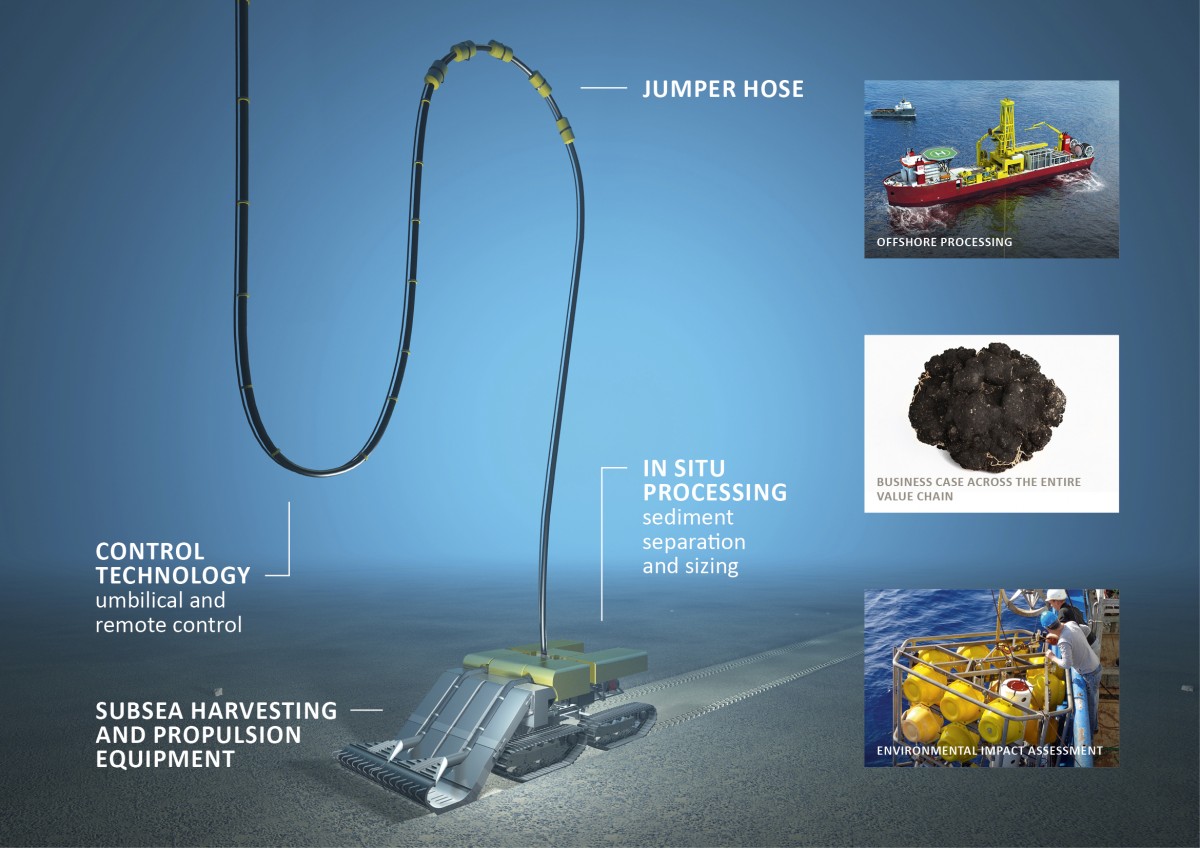 Most mining proposals center around a seabed collector supported by a supply chain borrowed from the oil and gas industry. (Image credit: Blue Nodules)

Ocean technology, which is advancing at a pace never seen before, will also prove instrumental. Breakthroughs in autonomous systems and AI have the potential to completely rewrite how certain industries operate in remote and often harsh marine environments. The implications for ocean mining could be profound.

At Okeanus, one area we are focusing on with customers, be it for commercial, scientific, or defense application, is the development of advanced handling systems for the deployment of Autonomous/Unmanned assets, both surface and underwater (ASVs/USVs/AUVs/UUVs) and autonomous LARS/winches for automated deployment from those unmanned assets. In short, we are working towards making autonomous systems more autonomous.

From a technological perspective, the ocean industries have only begun to scratch the surface of what’s possible in terms of autonomy and machine learning. In the commercial markets, we tend to think of unmanned vehicles for very specific applications, such as hydrographic survey, but navies around the world envision large unmanned surface vehicles (LUSVs)—vessels between 200 – 300 feet in length and full load displacements of 1,000 – 2,000 tons—as key assets for low-cost, high-endurance missions. So why not for ocean mining?

Then there is the question of resident subsea vehicles and their supporting seabed infrastructure. We already have hybrid ROV/AUV systems that can operate unassisted for months at a time. They can be set to full autonomous mode or controlled remotely, from shore. Notwithstanding the challenge of ensuring a sufficient yield, if effective for manipulating wellheads and asset integrity inspection, why not for selectively gathering and stockpiling polymetallic nodules?

Clearly, technology of this degree of sophistication comes with a hefty price tag, but as increasingly scalable options come to market it will offer deep-sea operators with much to think about as they adjust their business models to integrate emerging innovation.

There is, however, an alarming irony when it comes to the prospect of automating ocean mining operations: the CCZ is a remarkably remote location and a reliable energy source is imperative to powering manned or unmanned assets. So, the advancements of battery technology and storage will likely support, in one form or another, ever more efficient, safe and precise mineral extraction methods. And to develop and manufacture batteries at the scale and quality required, we need an assured supply of rare earth metals (e.g. lithium and cobalt) found in polymetallic nodules, lying in abundance on the CCZ’s seafloor.